The Battle of Shiloh

For the 1st time since about February I went over to Matt's for a game. Normally we play in the dungeon (cellar) on an 8x5 table. But with social distancing this would be problematic. However Matt has a new toy 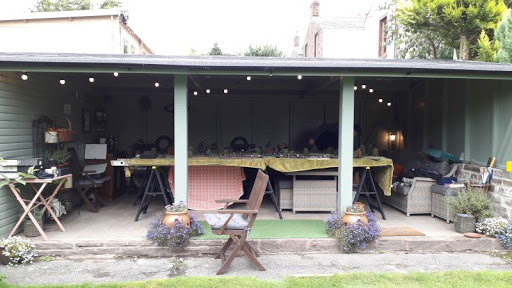 He has a new shed, I say shed but it is more like a cricket pavillion and it easily holds a 12x6ft table. It's a really nice structure and fab for playing on a sunny summer day. Being the last weekend in August is is cold and cloudy.
We decided to go big and combine out ACW collections to fight the action around the crossroads at Shiloh. Overall there were 20 brigades and approx 1000 28mm figures on the table. We used our bolt action ACW variant which works very well. 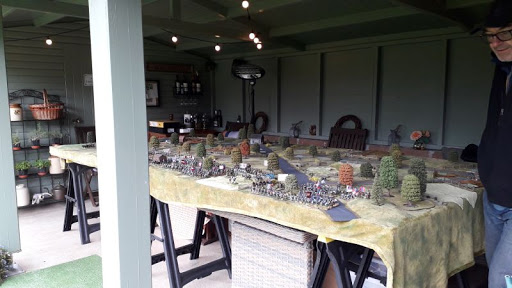 The table was too big to get it all on a photo. 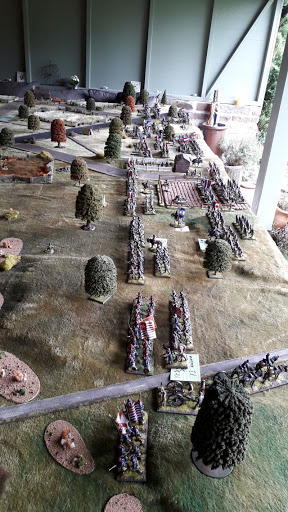 I was the confederates and generally have poor morale. My job was to attack, attack, attack. THe Union forces were battle hardened wit better morale 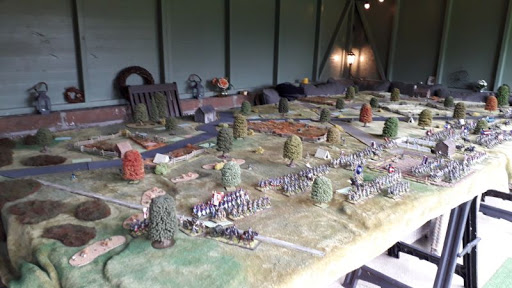 The Union wasusing hidden deployment with cards locating the regiments, some were blanks. 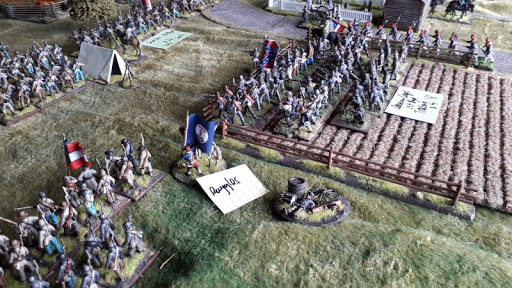 THe only plan therefore was to advance and find him. I rolled each turn to spot units, I only passed one of these so Matt appeared when he wanted to 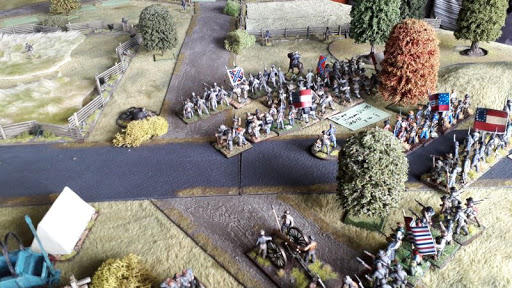 Advancing past the abandoned Union camps 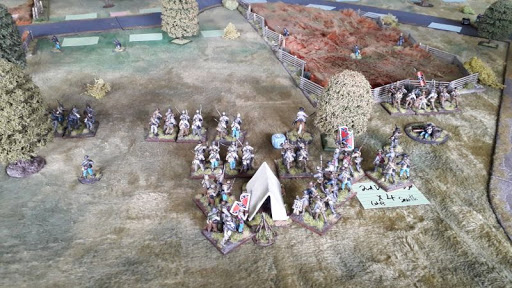 The Union camp has food, booze and boots so obviously the rebels kept stopping to have a look. THis really broke up my advance. Also historically the Confederates suffered badly from friendly fire, mainly cos some of them work blue uniforms. SO once per turn a unit, Matt's pick, to recieve an random number of pins and casualties. THis was also a little annoying 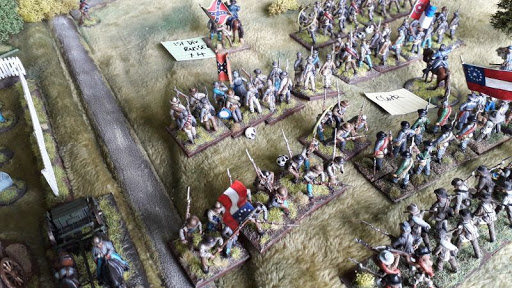 Artillery is generally not very effective in the rules. Not today. I haven't moved and Matt has routed a regiment from cannon fire 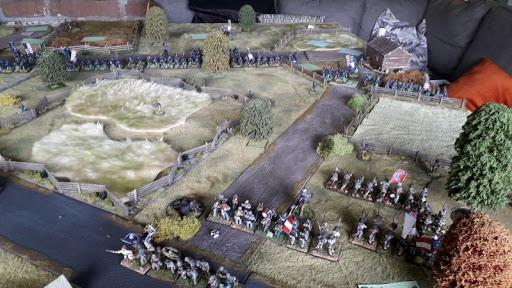 On the right as I advance the 1st Union division appears 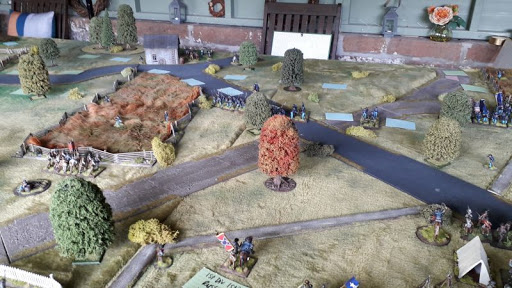 On the left a few units appear 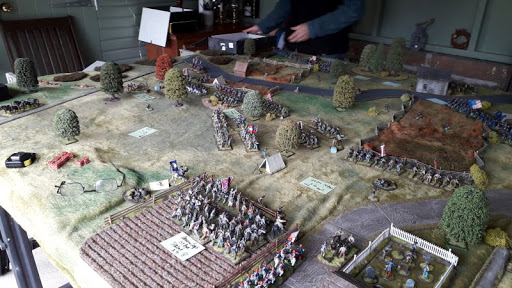 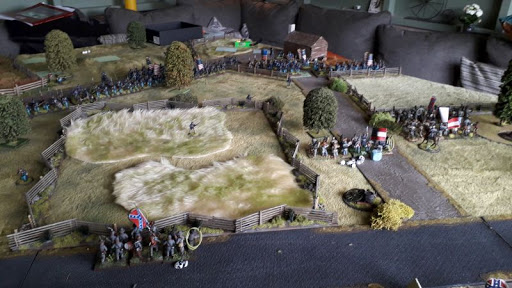 Long distance shooting on the right is gradually thining out both sides, I am weak here 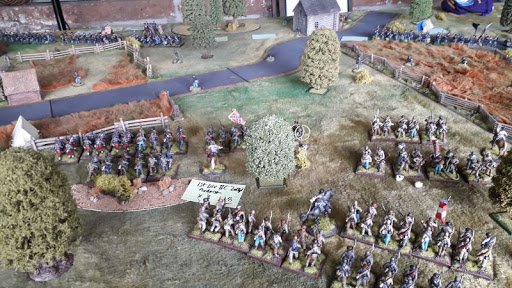 Back on the left the Union cards are nearly all blank.This is the way in. I can smash Matt's right and roll him up 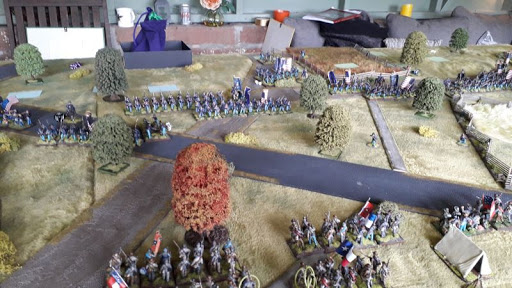 The centre is also fairly weak. Let's smash that as well 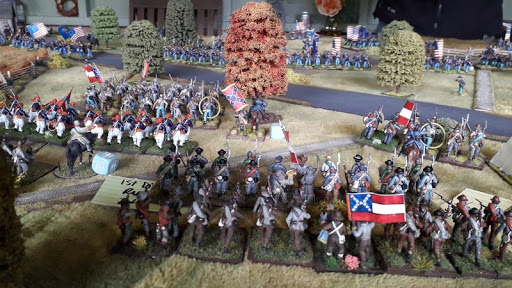 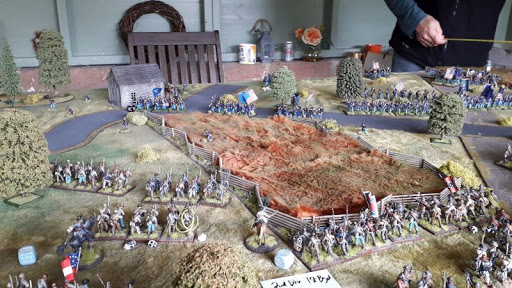 The field in the middle is difficult swampy terrain, keep out. THis will cause traffic jams 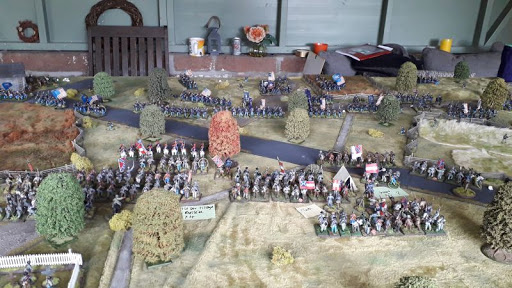 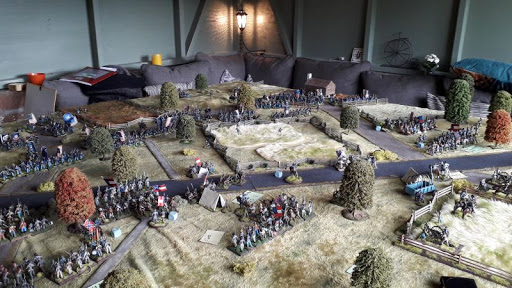 THe last turn, 8 hours later. I've not quite made it. The Union right is basically gone, the centre is at best about to collapse and I'm mob handed in both areas and will therefore force him to retreat away to the right. HTis is what happened in real life, the Union counterattacked, pushed the Rebels back and them the Rebels attacked again and won the day.
A brilliant game, the rules work well but we never quite finish, always too many forces. Great to see Matt again

This week I've been on holiday and generally got out as much as possible. I managed to to get in two days of face to face gaming without the aid of Zoom. God it was nice to meet actual people

First up I popped down to see Dave and we played a couple of gangster games using a mash up of his serenity city cowboy rules. They were an absolute blast. 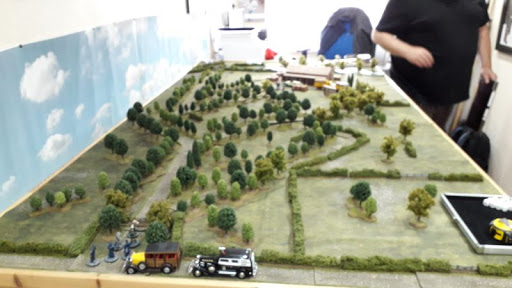 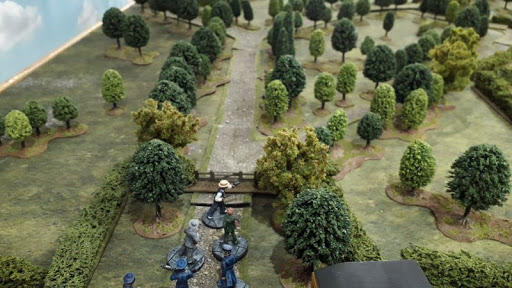 The Feds and cops approach 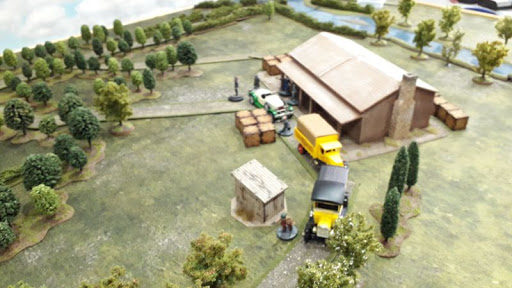 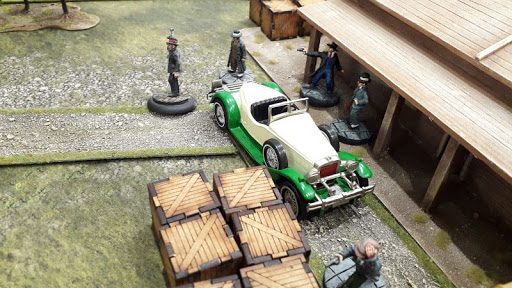 One of the guys in the white brimmed hat is the accountant and he must be captured alive. In the 1st battle I was the Feds and managed to approach the still undetected by smashing down the gate and capturing the lookout without a shot being fired. I then chased and caught the accountant.
For the second battle Dave was the Feds and he failed to snash throug the gate, the lookout managed to sound the alarm and the chase was on 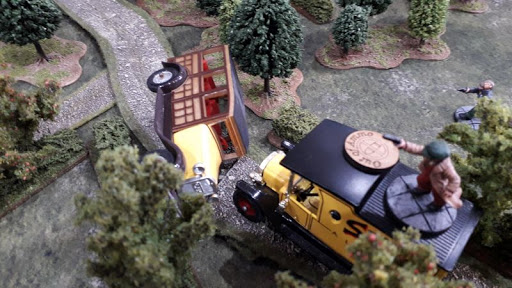 I drive head on towards the advancing Feds and my driver shoots the Fed driving the car coursing it to crash. I capture the other fed and hold him prisoner. However I need to men guarding him so I shoot him in the face and he dies of a fatal gut shot - it was a very big bullet.
Why did I need the men, well..... 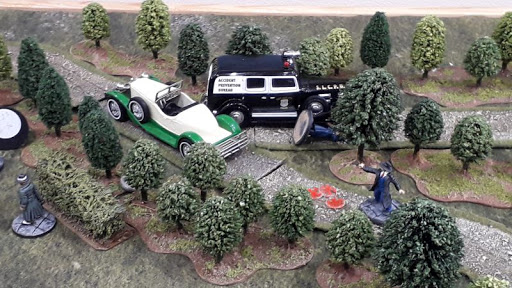 I've nearly escaped in the natty white and green car when the patrol car reverses into me and I have to leg it on foot. I don't make it off the table but I do kill all the Feds so another victory to me. I really loved this, the rules work really well and have ordered some damage cards from Dave's supplier. I've also ordered some gangsters from Dixons and have been buying cars in junk shops all week.
Next up today the Old Guard had a game day in Scruton. Me, John, Angus and Steve were joined by James, a new guy. It may be the last time we ever see Steve as today is his wedding anniversary and he forgot. Being old men we suitably distanced each other. Steve and Angus played chain of command which they really enjoyed and John and I played a couple of games 1st up a To the Strongest game, I like the rules, not my favourite but work well. Only hte 3rd time i'd played so still a learning experience for me, John was very honourable. I fought my Numidians against Johns imperial Romans
My plan was simple. Hold the centre and harry John withthe light cavalry and skirmishers, I had many. Then once disrupted i could steamroller him. John was on a hill with most of his forces and he never leaves a hill. 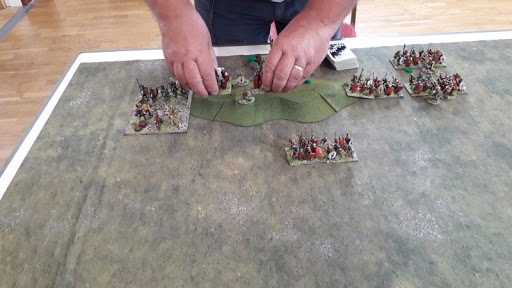 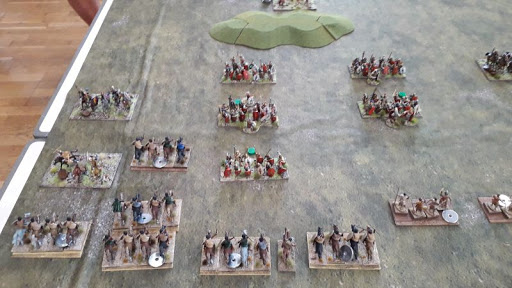 Pushing them back and off the table while my centre was much much too passive. He won, I made a pigs ear of it but learnt loads. Like the Numidians though
For the 2nd game John has been making paper soldiers from Peter Dennis. I was very very skeptical but 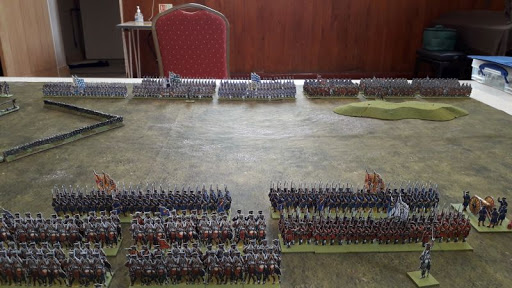 they look very good from the front and rear. From the side they are invisible. They come with a set of rules which actually work well and only need more detail adding. John won this one as well, but again was good fun.

One the painting front I've nearly completed the 7YW Prussians and will post the lot in a couple of weeks.Then it's time to start a new project, I've got some Arabs and some Huns to paint, some gangsters on the way and all those Landsknechts.

Really been good to see the guys again. Stay safe.