Not really done any painting since the challenge, think I've earned the rest. I did win 2 prizes during the challenge awards, a 30 euro voucher from Barrage Miniatures which I've used to buy a couple of  Bussing A5P heavy armoured cars for the VBCW collection.

I also won a £75 voucher from Westfalia Miniatures for painting the 2nd most number of figs. Will buy some Afghans I think with this.
Please visit their sites, they have some cool stuff and were generous enough to support the challenge. I won  a prize from Barrage last year and the boats and armoured car I got are great.
I've also been shopping. I got a £5 voucher from Warlord Games and bought these Russian Partizans for VBCW. Started to paint them but mojo off at moment. I've found Warlord figs a little hit and miss but these are really nice.

Since I played Blood Eagle I've been looking for more opponents for the Vikings and bought these Skraelings and Trolls from CP Models. They are great figs and will fight well against the Vikings The Skraelings have stone weapons so I will give them a -1 when the spears and arrows are being used against armour. 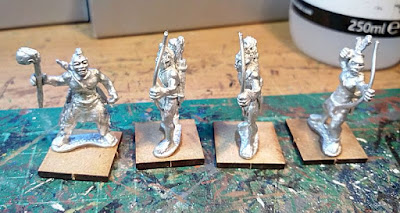 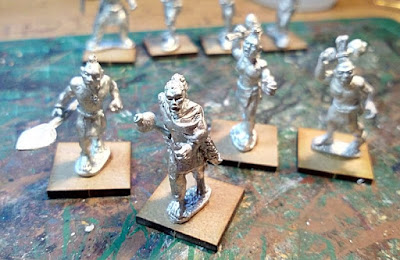 The trolls are really big and look really impressive.
Finally I've also ordered the Dahomey collection from Dixon Miniatures to give me some other powers for a Colonial Campaign I have in mind. Will post them when they arrive. That will probably all until Partizan in May. Not been there before and fancy a big show.