Sunday I went over to Matt's Dungeon and we refought the 1055 Battle of Hereford. AElfgar Earl of Mercia with Gruffyd ap Llywelyn, mercenary Irish Viking’s, Welsh and some of the Earls personal hurscarls attacked and sacked Hereford. Hereford was defended by Normans, yes Normans or Norman style Saxons lead by Ralph de Sudeley (the timid) and Saxons from Hereford.
It was our 1st chance to play our Dark Ages armies and my Picts doubled up as the Welsh, looked OK. The Welsh were mainly poorly armoured spearmen with light cavalry and a large number of Viking mercenaries. The defenders were well armoured infantry with some heavy cavalry with less well armoured Saxons around Hereford. We fought using Kings of War, which I really like but never win when we play. 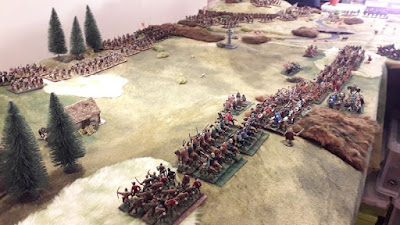 The battle field, really need a wide angle lens for this.This is my left with the Welsh facing the Normans. The objectives are the village at the bottom, the cross in the centre and Hereford at the top 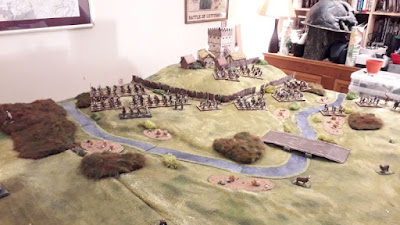 The mighty City of Hereford with Saxon defenders 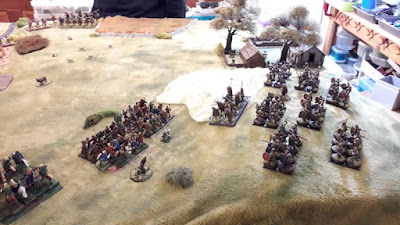 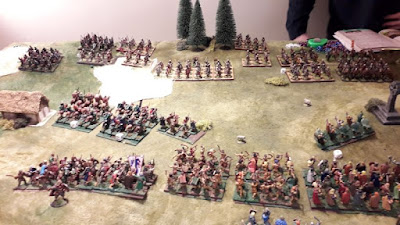 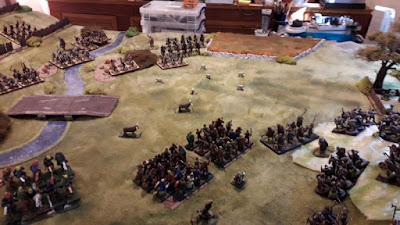 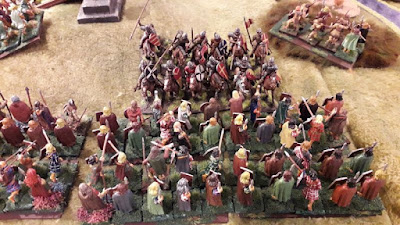 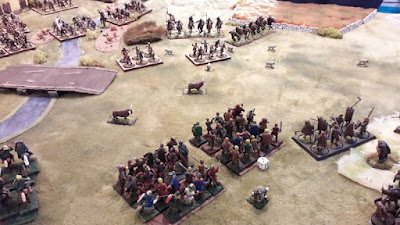 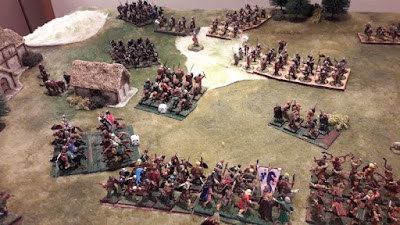 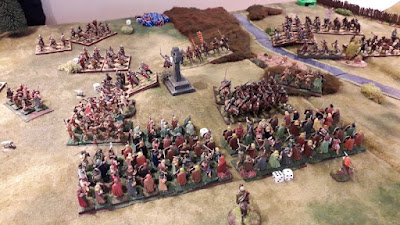 Lots as spear on horse action around the cross 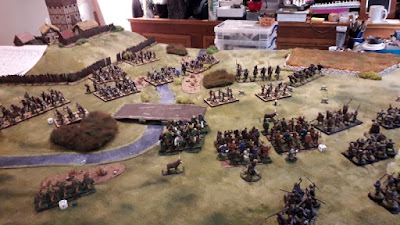 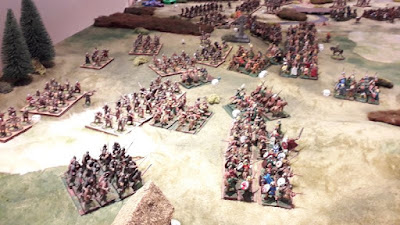 All kinds of hell breaks loose in the middle 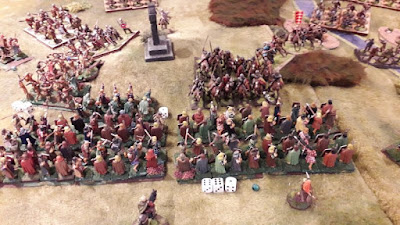 The knights and the spearmen are still fighting but I'm wavering 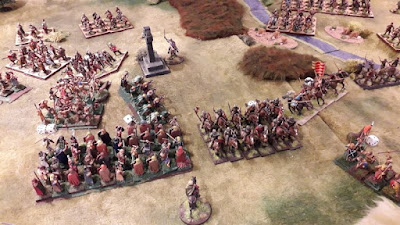 Not anymore, I've run off 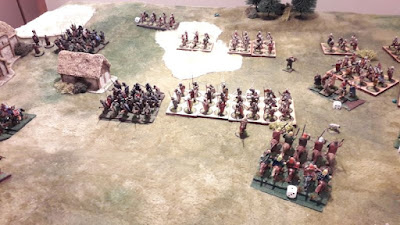 Disaster the 2nd of my 3 hordes of spearment has legged it. 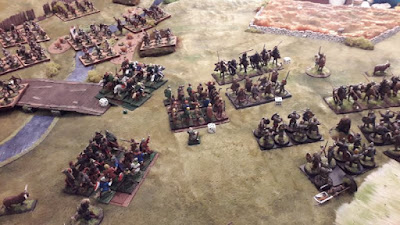 The crappy Saxon knights are causing bloody hell with the Vikings 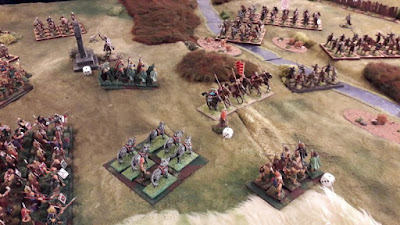 I scavange around in my unused troops box finds a horde of war dogs. They finsih off the main unit of knights and then eat the 2nd smaller unit 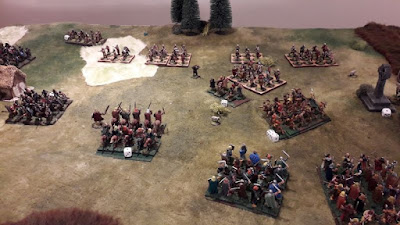 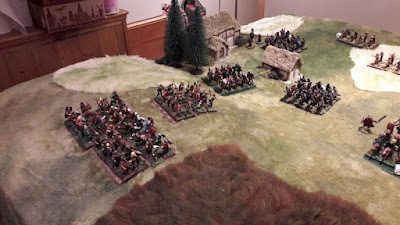 Matt allowed an extra horde o welsh to rock up, i was out pointed at the start and it seemed sensible. I brought on 2 hordes and neither of them moved but matt did attack this one 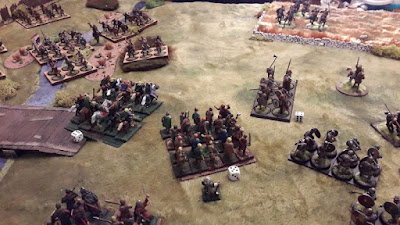 The Saxon knights have legged it, maybe they were crap after all 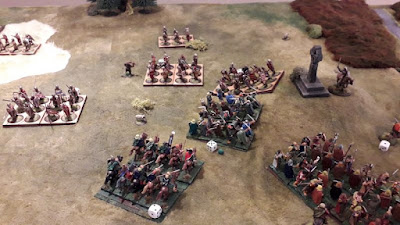 Final throes in the centre, i've basically won the centre but Matt holds the village on the left. It's all down to the right and Hereford. 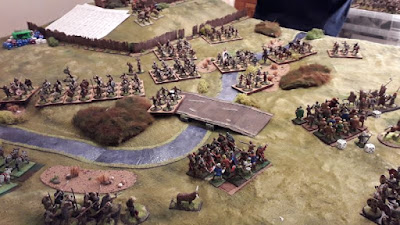 Cross the river, Kill the saxons 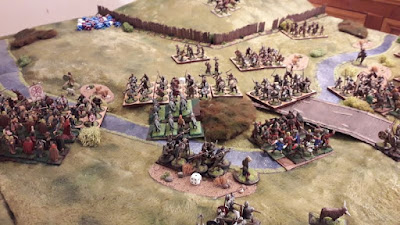 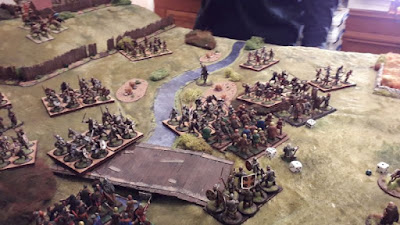 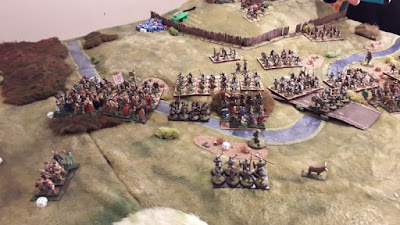 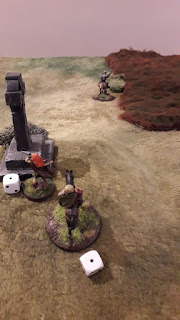 At the cross in the centre Ralph the timid has been fighting against Boudi, barely dressed Welsh warrior woman (she is a Hasslefree figure so is bound to be barely dressed, and Gruffyd and has legged it - so he was timid 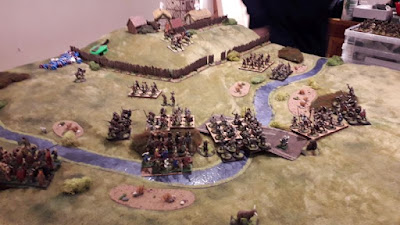 I've made it across the river (ish) but too late. Game end

The result was a draw and it was a great game.