I tested out my new copy of Blood Eagle today. It's very similar to IHMN with the right amount of Dark Ages spin. The book is beautifully designed by Millsy, the text is nicely spaced out and easy to read. I do have 1 grumble, it needs a QRS and the rules are short enough to do this easily. Instead I had to bounce between pages as I was assembling my warbands.
I chose 2 very simple warbands, Viking and Saxon with very few special traits. Although I have a copy of IHMN I've never actually played in anger.
The Vikings lead by Auden the Proud. They feature a berserker, a couple of heavily armed warriors, a swift warrior with 2 weapon skill and a bowmen

Godwin has 2 Hearthguards, 2 archers, 3 spear armed warriors and a fast fighter, all with higher armour values than the Saxons except Godwin.

The fight was to over a narrow pass in a wooded road, 1st test so keep it simple. 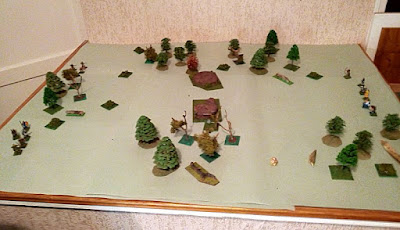 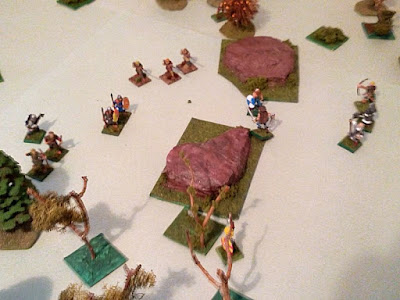 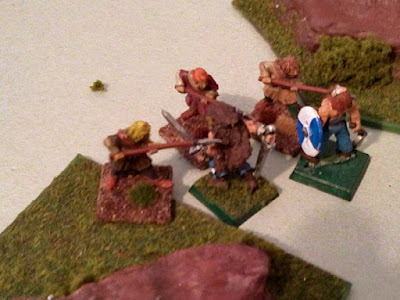 The first melee was between the Saxon spearmen and Ragnar and Loki. The fighting was brief and bloody. Ragnar easily dodges Swain's attack and dispatches him. Loki kills Sbert but Sowain  runs him though. Brutal and bloody 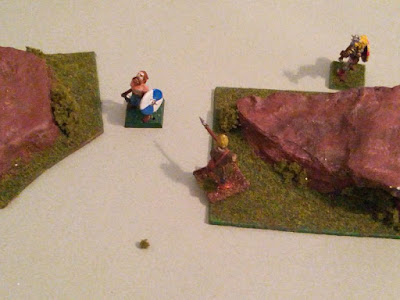 Some very dodgy photography intervened but anecdotal reports from the survivors said that Eric took out Egbert after a significant duel. The Saxon archers released several hopeless volleys with Sven returning fire and killing Athelstan. Eric crossed over and easily killed the other archer.
In the centre Godwin and his hearthguard advanced to the gap to face Helga and Ragnar. Godwin killed Ragnar. Auden advanced and finished off Godwin ending the battle. 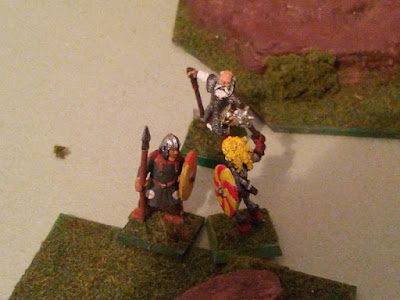 My impressions of the rules are good. Although the battle was simple and I only used basic traits I found the effect "realistic". Armour is very important and don't split the stats +2 is much better that 2x+1.
Will try more complicated rules next time but as I've got the week off tomorrow will be VBCW (or gardening).

My Blogger comments issues have returned, only Roy can get through, must be a ginger thing;)
Anyway I will reply here.
Matt you do live in a beautiful part of the world, if a little steep.
Michael waiting for so skels, 2 months and counting.
Gordon, see title
Posted by MartinC at 19:28 No comments:

Tales from the Lake district

So this week I've been taking the 1st year Earth Science students on a field course to the Lake District. Last full day today and for the 1st time it's raining.
Week has been great and I think the students have appear to have had a great time 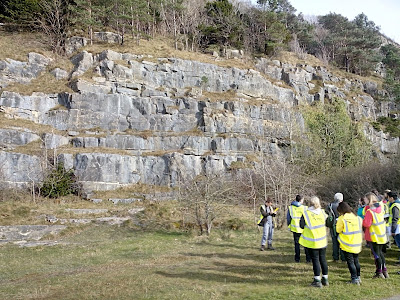 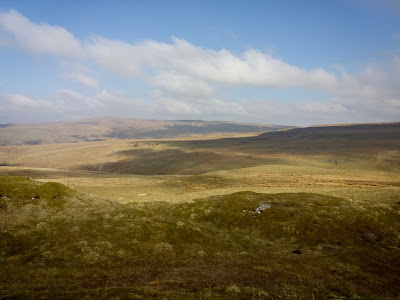 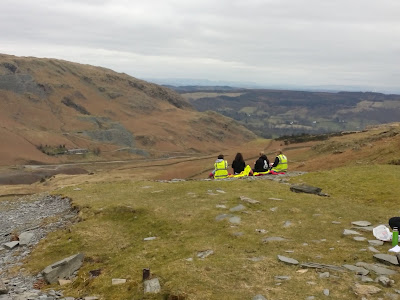 On the gaming front I've  bought Blood Eagle and some colonial figs, plus I'm hoping my long awaited order from ebob has arrived.

Told you this would be my last challenge post and as I'm on a field course next week I thought I'd post the last figures I painted. The challenge has been great and it looks like I've got the most number of points, very tentative and I'm bound to fall foul of the Law of Jante

It is the anti hubris rule and cures the effect of the subatomic particles called Ruperts that afflict the work of all the cocky bastards. (See the book of short stories called Astrotruckers by Mikael Neimi).
Anyway on to the figures. 1st up some 1900 British Royal Marines Light Infantry from Studio Miniatures 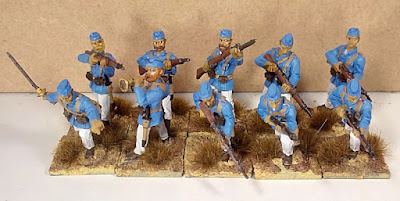 Really like these figures, they were a joy to paint, especially the sky blue tunics.
Next up some 24th Foot by Foundry to fight all my Zulus 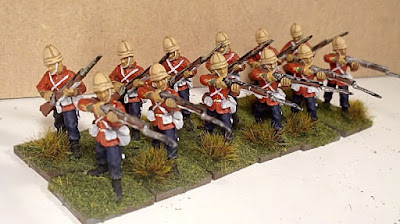 Finally some group shots of all I have painted 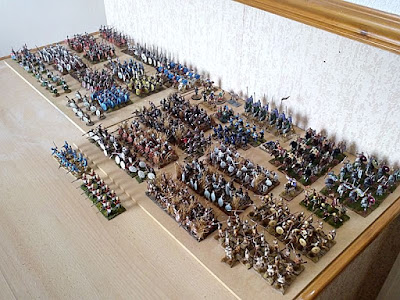 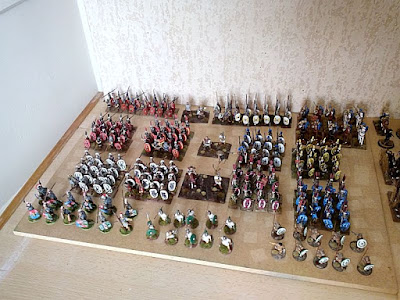 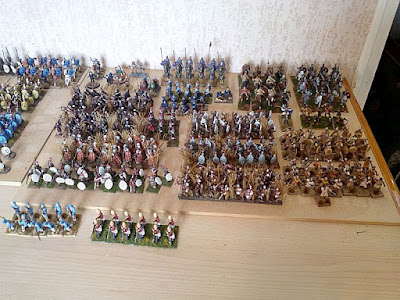 Something epic to close with

I went to Albanich today in Dumfries. I'd never been to Dumfries before - the one way system is epic. The show is small - dozen traders and 8 demonstration games. Matt Crump put on a VBCW game and as I've been following his spring offensive campaign on his blog I thought I'd go along. It's less than 2 hours across the thin bit of UK.
Before I went I'd emailed Stu at Col Bills as I had 67 28mm imperial Romans to sell. Stu gave me £47 store credit for the figs so I bought all of this for £10 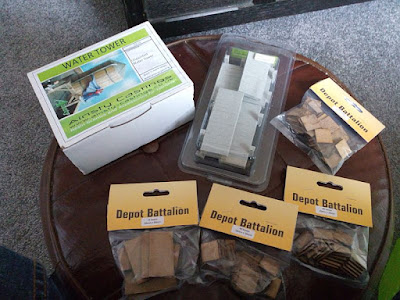 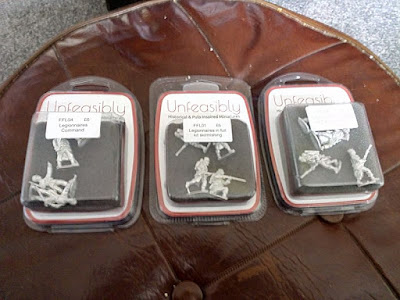 French Foreign Legion - my favourite Airfix figs from my youth 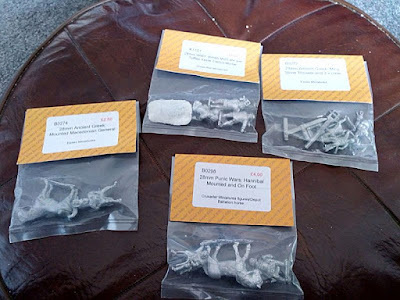 I also bought some British marines by Studio. These are great and i have wanted them for ages 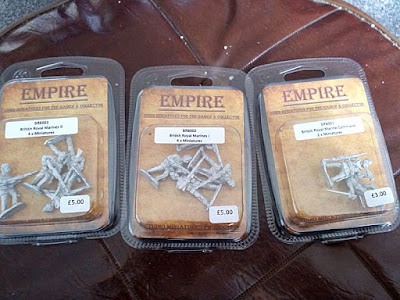 I was on a roll now so I also bought 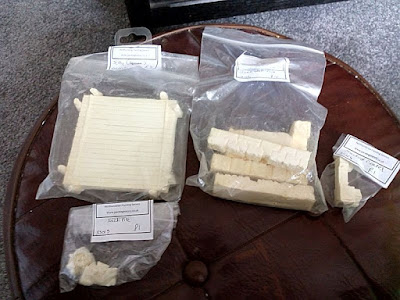 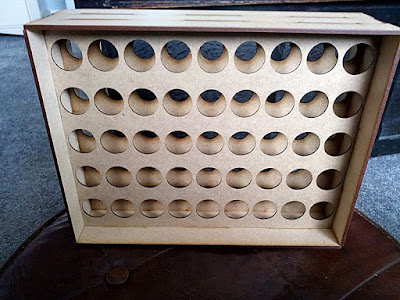 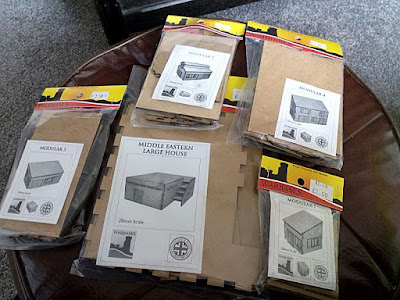 The games were the usual standard - couple of Sci Fi ones that I don't really get, a strange Fitzcarraldo river battle - 1 raft moving down rive being shot at by natives with bows and then repeating, didn't get this one either.
There was a To the strongest game which looked great 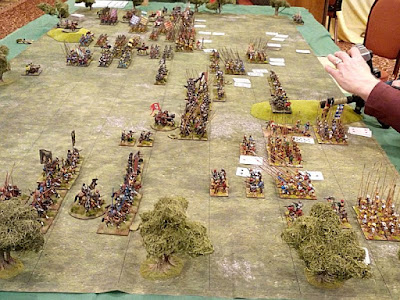 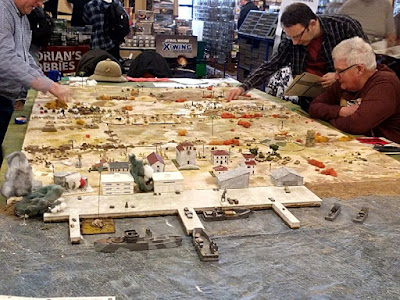 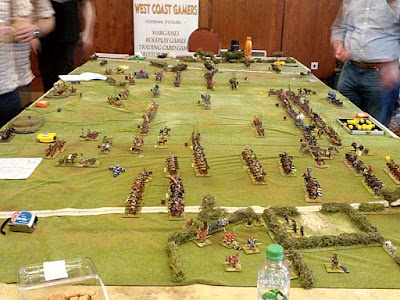 Finally Matt's game. This was a fantastic looking table. The battle was fought using Bolt Action rules and they appear to work well 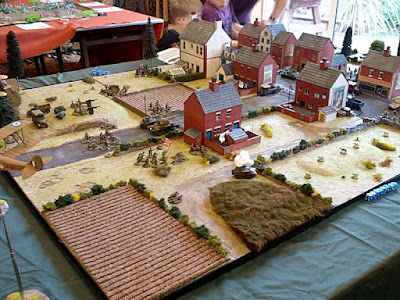 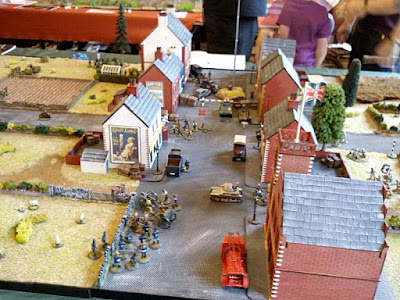 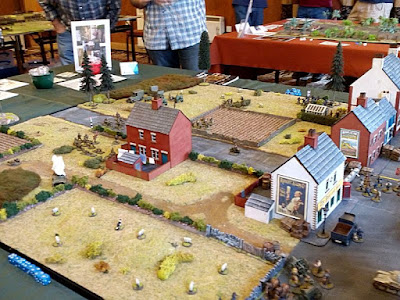 All in all a good day. I was planning to give To the Strongest a trial tomorrow but I feel the call of VBCW and I need to tweak the rules

News from the front

No pictures today but things have been happening. Very, very busy at work so no painting for a whole week and not sure how much will be done before end of challenge. Hopefully my 500 point lead will be enough.
Anyways things haven't  stopped. I bought a copy of To the Strongest. It looks very professional, unusual for wargames rules, and Millsy should be proud of his design skills. Simon Miller has produced an interesting set of rules that I'm  keen to try, radically different from my usual mountains of dice.
I recovered my gaming boards with green felt and they look good, even with the bodged last 2 cm, my 1800 wide boards are 1802cm - very annoying. I have dotted them every 1500mm to create the boxes used in TtS and it looks fine.
Finally I  got an email from warlord today giving me a £10 discount so I bought some Russian  partisans for VBCW.
may actually go to the Dumfries  show this weekend
P.S. Blogger eating comments again so if I don't reply sorry but I still love you all

I have finished my Republican Romans, I do love that feeling when you have completed an army. There were 4 units to complete 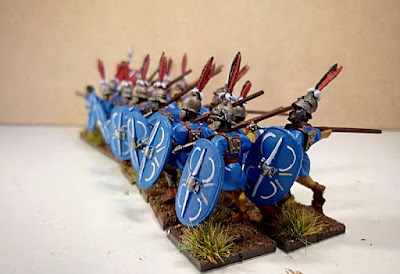 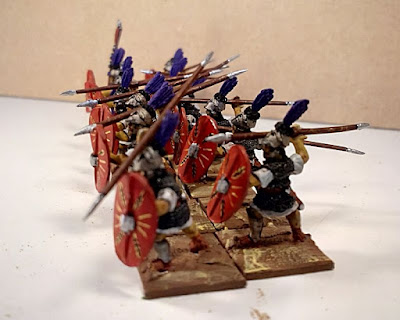 So this is my competed army, 2 units of velites and 1 unit of Triari were completed during the last challenge but the rest are all this one. 4 units each of Hastai and Principes, 2 Triari, 1 unit Equites, 2 units Velites, 1 unit of allied Volosci and 3 Generals. All the figs are Aventine, Crusader or 1st Corps 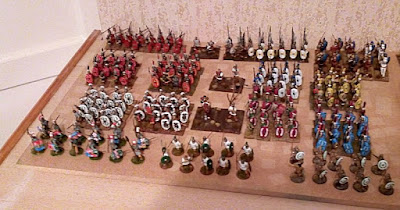 I also completed this unit of 12 Gallic Noble Cavalry all mounted on greys - seemed like a good idea at the time - by Wargames Factory. I really hated painting these and it has taken weeks to do them.

And finally 8 Gaul slingers, again Wargames Factory. Washed in Windsor and Newton peat brown ink, which works very well but leaves them a little shiny but varnishing will cure that.

I posted this very early, original post was only yesterday but I need to test out Blogger which is playing silly buggers with comments