Painting mojo still off so I've stopped trying to fight it and wait until it reasserts itself. Luckily it's summer, all be it an English one.
The postman did come today though and left me a really cool pressie 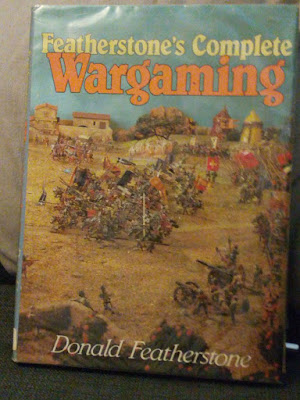 It's secondhand from Powys Library Service via BetterWorld Books a global book charity (This is the UK link but there is a US one - .com not .co.uk) that donates it's money to support reading and learning.
I've also placed a large order with Warbases to scratch build a terraced village for VBCW games.
No music this time but I have become addicted to the Fringe on Netflix - an X-files reboot that is both darker and funnier than the X-Files. Maybe that explains my lack of mojo

Posted by MartinC at 21:17 No comments: Links to this post

Out of Interesting Titles (for now)

This title seems appropriate as I've done no painting for 2 weeks. I picked the 2 hottest weeks of the year to do decorating and mainly I did decorating. I hate decorating, if it's bigger than 28mm I'm not interested.Anyway its done and I have new carpets, which is nice.
RoyW has just pointed me to Colonel Bills who have some VBCW figs and picked up a few interesting figs.
I also got Netflix and have been addicted to Continuum which to be honest is baffling. It is a time travel show and falls into the temporal paradox trap and disappears up its own ass.
I have done some wargaming stuff though and have designed my 2nd Schleswig war solo campaign


This is a stylised recreation of the 2nd Schleswig War between Prussia and Denmark in 1864 and was the opening conflict in the Unification of Germany. The Prussians and Austrians invaded Holstein in January and quickly conquered the pro-Prussian region as the Danes retreated. On 2nd February the Prussians and Austrians crossed the River Eider in 3 locations and entered Schleswig and the real war started.
This campaign will recreate that portion of the war and creates a campaign with 1 division of Danish troops and 1 division of Prussians.
The Prussians are numerically superior and therefore 2 days after each battle will receive 100% reinforcements. The Prussians also have the superior Dreyse needle gun which is superior in the rules. They are advancing and had a habit of keeping their artillery at the rear then in all battles except where the Prussians are defending then the guns arrive as reinforcements in D6 turns.
Danes have limited numbers and will receive 75% of casualties after each battle.
Both sides have not fought a major war for at least 16 years and have undergone significant reorganisation so at the start of the war there are no veteran troops.

Danes start at Apenrade with 1 full division and lose if the Prussians take Haderslben. Each turn is 1 day and Danes make first move once the Prussians decide which crossing to use. Subsequently Prussians move 1st and then the Danes.
Danish Rules
1.      Danes are unaffected by weather
2.      Danes are 1 division plus an independent  infantry battalion and Dragoon ½ regiment.  The independent unit starts at Hagel (50%) or Missuride (50%). May move in any direction including off road and may support defence of a town or attach supply column. Each town also has a battalion and possible artillery. Danes may hold against the vanguard or may retreat.
3.      Danes are unaffected by supply
Prussians start other side of Eider and lose if they do not advance past Apenrade after 30 turns or if the division is destroyed in battle or due to supply
Prussian moves are decided at Random with the following conditions
1.      Prussians must always advance or move sideways but can only retreat
2.      Odds of each direction are shown. For crossing 2 there is a 50:50 chance of advancing towards Hagel or Missuride
3.      Prussians advance as a brigade vanguard including Jager and Cavalry followed D10 moves later by the division. The Corps is always in the town behind and will not cross Eider until a town is taken
4.      Prussian Division carries 1 weeks supply and uses it at 1 day per move plus 1 day per major battle. A loss in major battle  costs 3 days supply.  A captured town contains 3 days supply.  Corps can send a supply train out once it has established a base and is stationary. Supply train contains 1 weeks supply and travels at rate of division. Only one supply train can be sent at once and is guarded by Jager Battalion. If the division is out of supply then it remains stationary. If engaged in  battle loses 1 to all dice rolls.
5.      Prussians throw for move, where appropriate and then a weather dice is thrown. A 6 on D6 is bad weather and division must halt for that turn.
Battles
1.       Major battles occur when 2 sides meet on the map
a.       If both sides move it is a meeting engagement with vanguards meeting first
b.      If one side is stationary then they start fully deployed and pick the ground
c.       If one side is stationary for more than one turn then they start defensive positions
2.       Major victory then losers retreat 2 full turns and victors may advance 1 turn
3.       Minor victory then losers retreat 1 full turn and victors halt


4.       Draw both sides retreat 1 full turn
Once I've finished painting I will post campaign updates as it progresses and evolves.
Finally I went to see Modest Mouse last week and they were great

Posted by MartinC at 00:08 No comments: Links to this post