I had planned to fight a VBCW battle this weekend but felt the urge for ACW so I fought that instead using my own rules. I got 1/2 way through the battle and didn't like how my rules were behaving, messy, complicated and just didn't feel right. So I rewrote the rules (still very old school but then so am I). Basically 5 or 6 on a D6 is a hit and all the shooting factors (range, cover etc.) are now added to save roll. These worked much better but then there was some very bad photography so I could only salvage a few shots 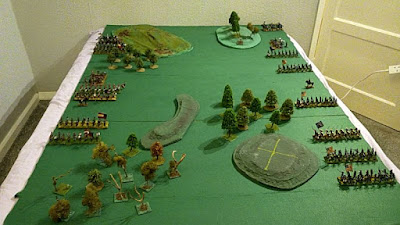 Open set up. Confederates on left, Hay's Brigade). The deployment was done using cards with 50% blanks. The Confederates were pretty evenly spread out whilst the Union forces (1st Brigade III Corps) were heavy on the left and light on the right and centre. 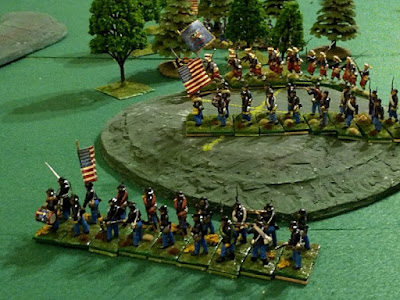 The Union advance on the left 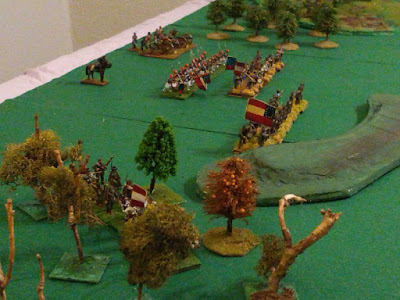 The Confederates occupy the woods to their right and advance across the rest of the field. Some cannon fire started to inflict light casulaties on both sides 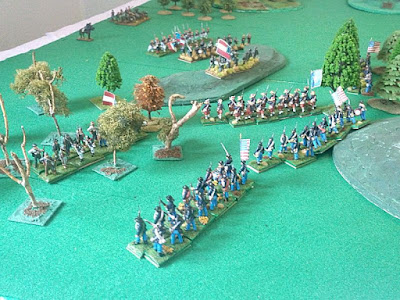 The 114th took advantage and charged them from the hill. With 2 routing units in front of them the entire Union flank advanced and drove the other 2 units opposing them from the field. The photography now packed up but with 50% of their army routed and a stuttering advance of their other flank the victory of the Union was assured.

Overall the rules worked nicely and they evolved through the battle. I do need more troops though, about 4 more regiments per side and a couple more cannon batteries.
I have reposted the tweaked rules above.