Disaster at la Makan - The Men Who Would Be Kings AAR

I fought my first battle using The Men Who Would Be Kings rules. The set up was a simple meeting engagement battle to test out the rules so I didn't use a scenario nor the Mr Babbage variant for solo play (sounds like a version of Mornington Crescent).
The forces were 19 points each and played on my 4x3 table so it was a little crowded. My standard British unit size is 10 and the rules recommend 12 for regulars and 16 for tribal units so I scaled them down to 10 and 13 respectively.
The British
50th Staffordshire (my old Scout Troop) under Captain Fitzjohn who was a weakling so can't fight in melee and has a leadership of 7+
1st Brigadoon Highlanders who are fierce. They are lead by Captain Kelly who was inexperienced so the Highlanders couldn't make a free move but he did have a leadership of 6+
Royal Artillery field gun under the "Jolly Good Chap" Lt Bowden with a leadership of 5+
The Mahdists
3 units of tribal infantry with leaderships of 6+, 7+ and 8+
2 units of irregular infantry. One unit was armed with modern weapons and had a leadership of 5+. The other had obsolete weapons and a leadership of 7+

Each turn is UGOIGO and you activate each turn. If you fail the activation then the unit is limited to a couple of prescribed actions dependent on the type. 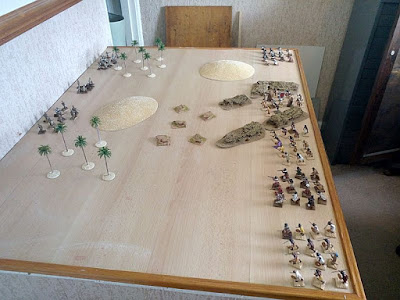 The set up, palm trees are soft cover but don't hinder movement and the walls of the wadi in the centre are impassible 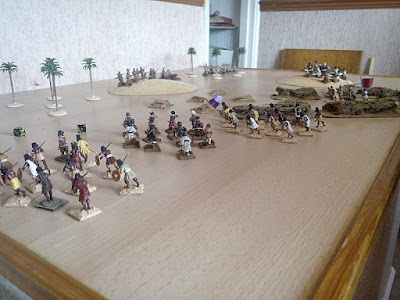 The 1st turn sees the side advance with the Staffs climbing the hill and the Highlanders entering the palm trees at the top. The plan is to hold the hill and butcher the upstart Mahdists. The Mahdists are strong on the left and will attack from there. 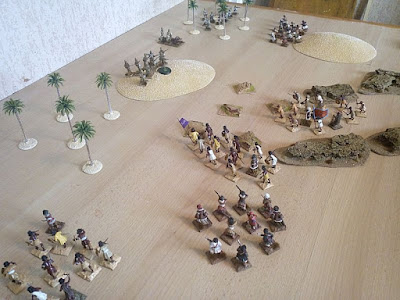 The Mahdists press forward and the Staffs open fire at long range reducing the strength of the good unit of Irregular infantry in the centre. But they pass their pin test and press on, returning fire. 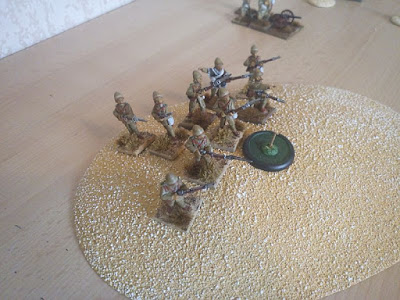 A lucky shot takes out Captain Fitzjohn and the Staffs are in instant deep trouble. They are now leaderless (8+ activation) and pinned. They must remove the pin in their next turn or retreat and continue to do so until they unpin. 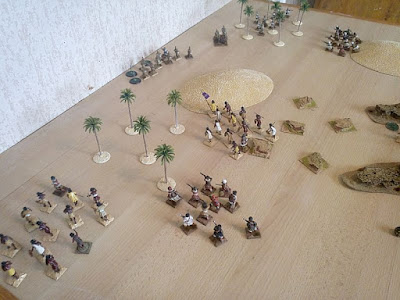 With the Staffs in retreat the Mahdists surge forward unopposed. The Highlanders are thinning down the irregular infantry at the top but are firing through soft cover so need 2 hits to score a kill. THe field gun is epic, it rolls 8D6 and kills on a 4+, the tribal infantry in the centre have been hit and stopped for now. 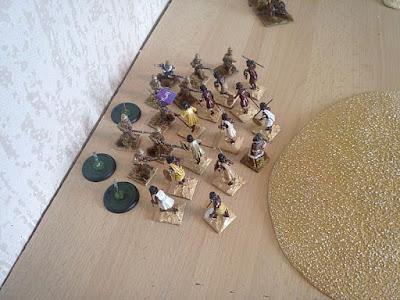 A unit of the Tribal infantry smash into the Staffs, kill 4 and they leave the table. The extra pins are a mistake (the rules are a little confusing here) but it made no difference as their rally rolls were shocking 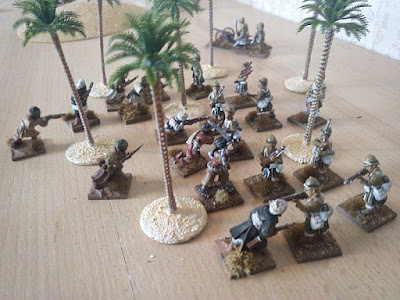 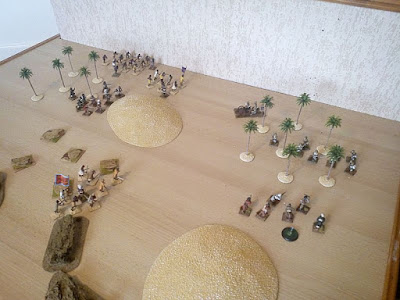 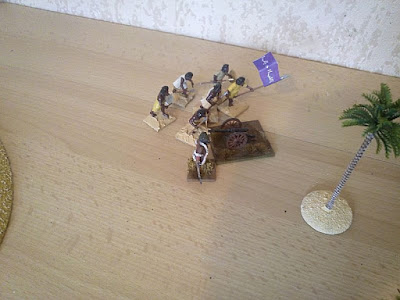 The mahdists charge and butcher the crew. Only the Highlanders are left now 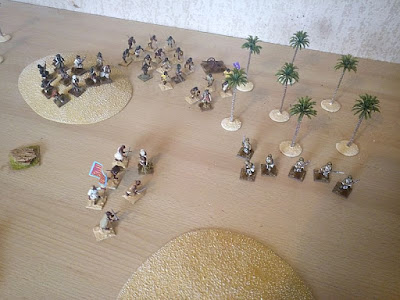 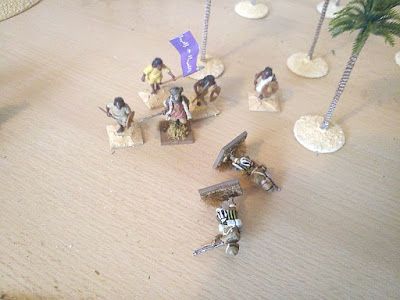 The final attack finishes them off.

So what do I think. It was pretty good, IHMN is better and my big unit mod was more fun. It smacks a lot of Lion Rampant and Dragon Rampant. The activation is generally irrelevant unless you are pinned then it is vital. I lost an officer (roll 2D6 if your unit takes casualties and on double 1 it's your officer). This made the Staffs useless.
The firing and melee work well.
What would I change, the instructions around pinning and rallying are clunky, the QRF is rubbish. There is no overall leader. This is wrong. All forces have a boss. This guy could then be attached to leaderless units or used to reroll a failed activation if his leadership is better. There aren't enough unit types and this could be solved by increasing the racial variations etc.
What is good. It has real potential with more practice and some minor tweaking to be a fab set of rules. It will work well with big battles and lots of dice, think Warhammer 1880.