The Battle of Greenhead - a tale of Treachery

Today I went over to Matt's Dungeon for another epic VBCW battle. The Fascist Northumbrian Army was launching another assault on Carlisle. The Carlisle Royalists met us at the village of Greenhead. This battle was unusual as both sides contained fascists and forces from the local Constabulary. Matt had written some blue on blue rules which were activated by drawing a die from the dice bag (we were playing Bolt Action as usual). The terrain was beautiful as usual and dominated by an urban environment split by a railway cutting what could only be crossed by vehicles at the humpbacked bridge.
Let battle commence 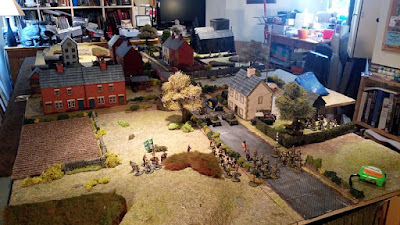 The view from Matt's side, a mix of regulars, irregulars, armoured cars, motorbike MMG,, an AT gun, a mortar and a plane 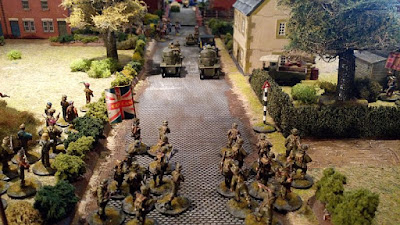 The regulars and the Women's Institute 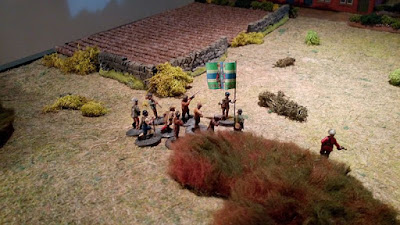 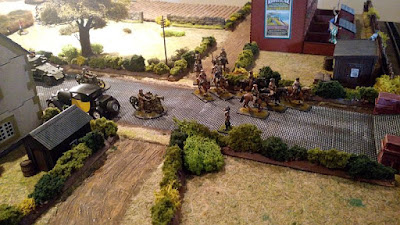 Cavalry and motorbikes to the fore. Standing alone is a communist agitator, Svetlana, who is one of the objectives She will move randomly each turn 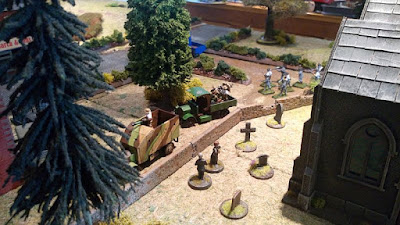 My forces advance around the church, Northumbrian Special Constabulary (The Alnwick Vampires), 3 squads of paramilitary thugs 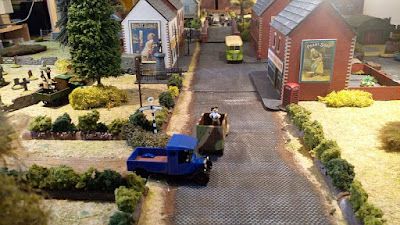 More Vampires and a truck full of Police 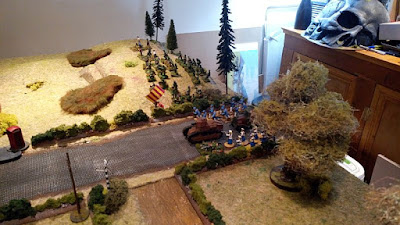 THe rest of my force arrives, mortars, the Northumbrian Rangers, Marines, female sailors, a Renault FT tank and an Eberhardt armoured car. 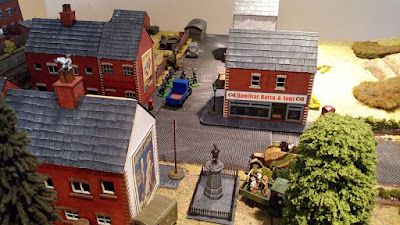 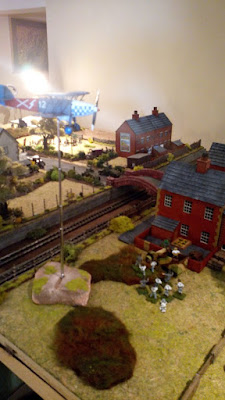 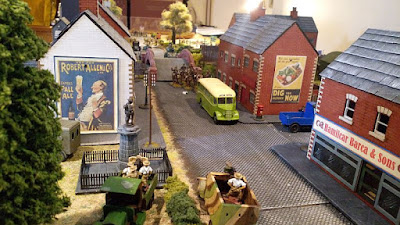 My truck mounted AT gun and a Lancia full of Vampires guard the approaches as Royalist cavalry makes a mad dash across the bridge. A direct hit of HE stops them and they dismount and enter the house. 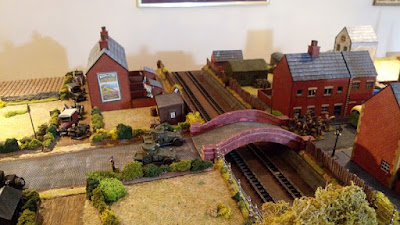 The Royalist AC's and infantry take up position across the bridge 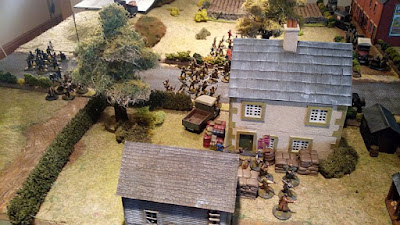 as the rest of the Royalists advance 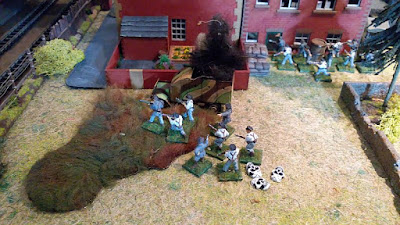 The Royalist mortar tries a specualtive shot at one of my Lancias and brews it up. Note in Bolt Action mortars are pretty poor needing a 6 to hit on 1st shot. Lucky boy 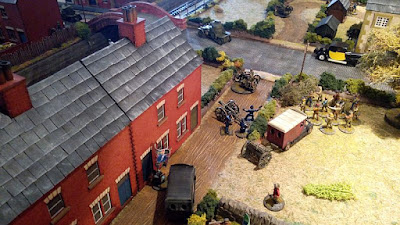 The Royalist AT gun takes up position covering the bridge. I have plenty of stuff to capture the town but this is bound to slow me down. 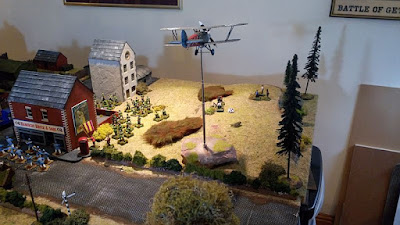 The plane attacks again and strafes the mortars. This is slowing me down and becoming a pain 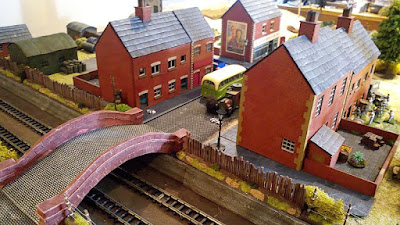 Still no problem, I advance my AC to pin the dismounted cavalry in the house. No luck this time but plenty of ....... Boom the mortar fires again and the AC is immobilised 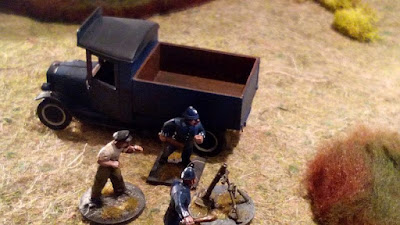 This bloody mortar - yes this one - has hit and wrecked 2 armoured vehicles with 2 consecutive first shots. 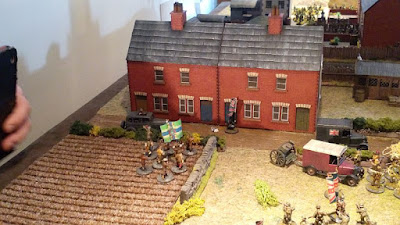 The Blue on Blue dice is drawn and the result is that one of Matt's fascist units swaps side, Better still it's a regular unit inside a house on the middle of Matt's left. I have wrecked his defence and I never had to touch a dice. Matt's infantry converge on the traitorous unit as I lay fire into the Golfers, bloody stupid game. 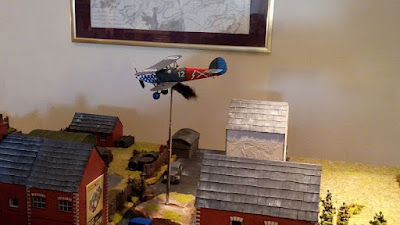 A burst of fire  from my remaining Lancia takes out the plane, I do like shooting down planes and it happens alot. 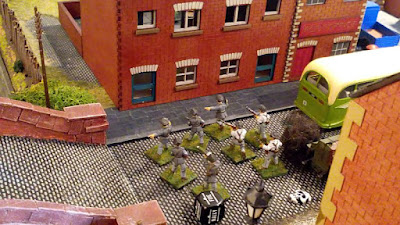 One of my sections of Vampires assaults the dismounted cavalry in the house and clears it easily. I own all of this side of the railway 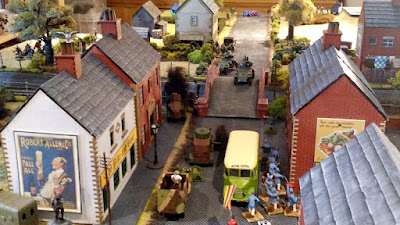 My Renault takes the opportunity to advance and open fire on one of the ACs. I miss and the Royalist mortar fires again and brews it up. I've lost 3 of my 4 armoured vehicles to this mortar. They will have to be punished. At the same time the golfers assault the turncoat fascists but are killed. However another squad of Royalists follows up and kills my brave and wise allies. 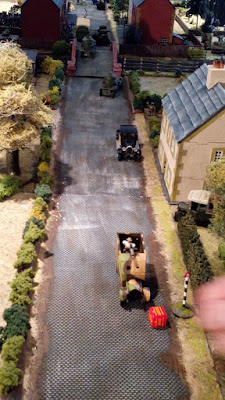 I am rocked back but Matt takes is AT gun off ambush and I spot an opportunity. I double move my Lancia down the road (48") and it swerves past both ACs and halts well through the Royalist lines with a full load of  Vampires. Matt is in trouble now and will have to turn 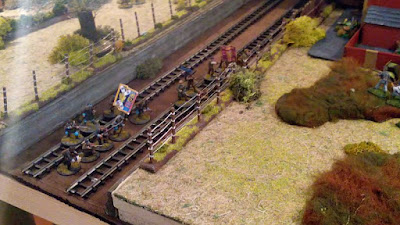 On my left Matt has launched an attack across the railway lines and although they get across and take out 2 of my units they are overwhelmed. 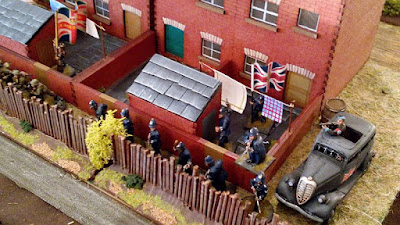 I'm stuck trying to cross the railway but then blue on blue action comes to my rescue again and another of Matt's units swaps side. Once of my mortars takes out the up-armoured car and Iown the row of houses 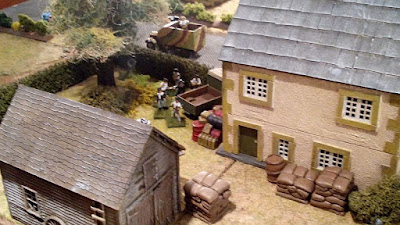 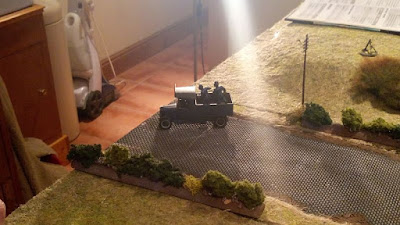 I've hit the mortar but when Matt goes to activate he gets a FUBAR roll and the crew leg it. 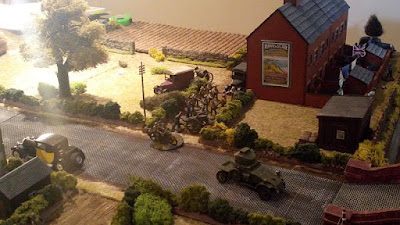 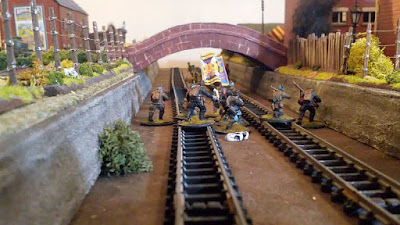 In the cutting there is a squad fight 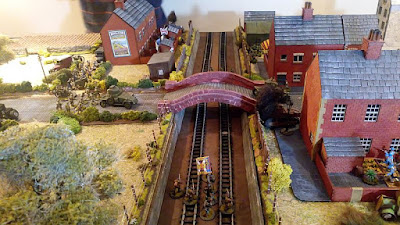 It was a great battle and a draw. To move forward will be too costly and there was no time to pound him to dust.
In reality the battle was defined by 3 mortar shots and 2 turncoat units. Carlisle is safe. for now.
As always Matt is a great host and the battle field was a joy to behold. Next stop Partizan