So me and Dave went down to Partizan on Saturday and were joined by Stig Kelly on Sunday for the main event. Saturday night we went for a curry with Simon Miller of To The Strongest fame and Andrew and Ian, partners in crime. Great night. At the curry Andrew declared that I've always found lamb curries disappointing,
Bright and early Sunday morning we trotted off to Newark  Showground to set up our demonstration battle. It's my favourite venue, spacious with great games and loads of stuff to buy - more of those in posts 2 and 3.
Dave had brought a couple of Mahdits (OK 750 inf and about 150 cavalry). 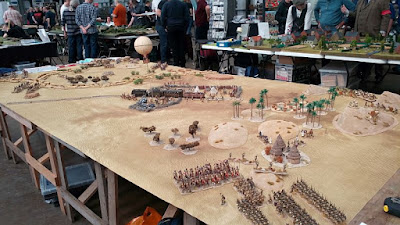 The set up. The Britsh are building a railroad across the desert. There is an observation balloon keeping an eye on proceedings. This was the most photographed item inn the whole show and was loved by all 1000 visitors. 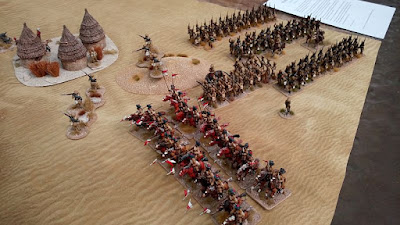 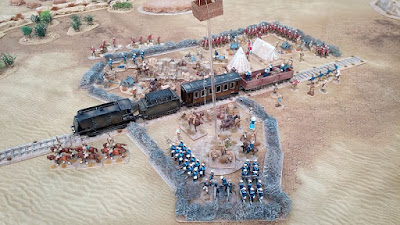 The Railway defenders have built a zariba to defend their position and are a Naval detactment with 2 Gardner guns (one on the train), the Irish Guards (could have been the Scots Guards) and the New South Wales Artillery. There were lots of colourful characters dotted around including engineers, signalers, the press and the dirty postcard sellers. 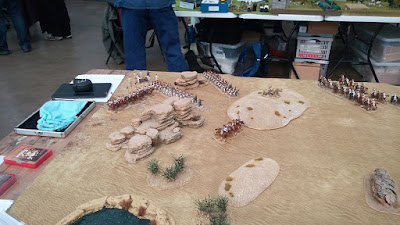 In the opposite corner was an Egyptian column, the survivors of of a losing battle, making their way to safety. A couple of Mahdist cavalry units have appeared in turn one to block their advance 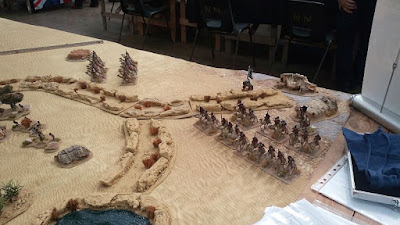 The Mahdists have stated to appear. We were playing Black Powder, a nice cinematic set of rules, and Dave was driving the Madhists using random activation rules from Sands of the Sudan. They worked very well indeed. Me and Stig were the Brits. 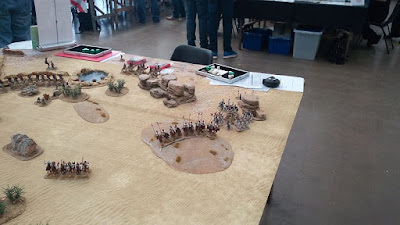 The Mahdist cavalry charged the Egyptian column and routed 2 battalions of the shell shocked infantry before the Egyptian Lancers saw them off. The remaining battalion and a field gun formed a square and tried to hold out for the rest of the battle. As for the Lancers.... 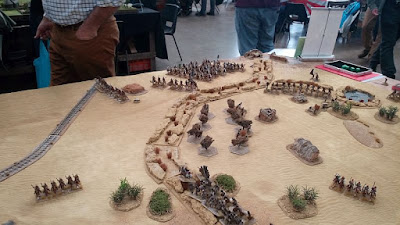 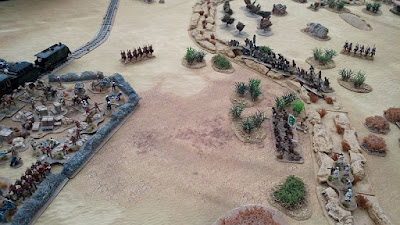 "Stand To". The train defenders man the barricades as Fuzzies rise up and start to advance 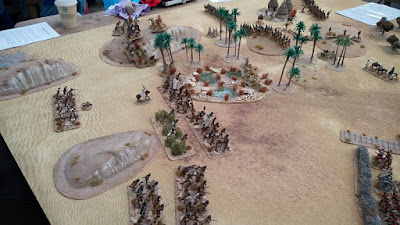 Further away another large force of Mahdists attack the other end of the zariba and the Indian brigade moves into position. I have a lot of firepower but there are a lot of enemy and they are everywhere. The Gardner gun on the back of the train opens fire and jams immediately. This sand is going to be the death of us. 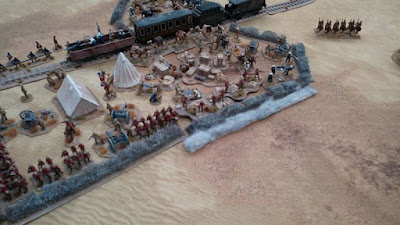 There is a gap in the defence. One end of my zariba is only manned by 3 skirmish sections and a field gum. A unit of mtd infantry is providing some support but will it be enough 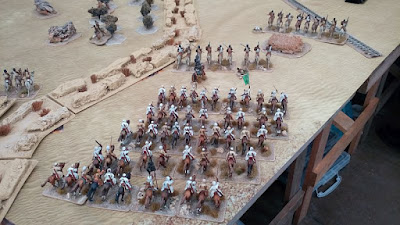 The Mahdist cavalry is massing for an attack 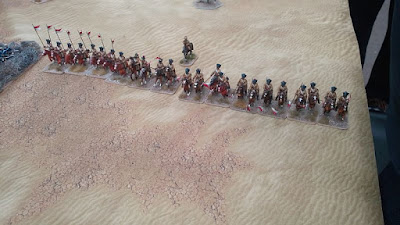 They are faced by 2 regiments of Bengal Lancers 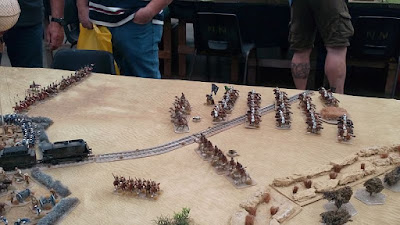 The Mahdists fail their activation and the 2nd Naval Gardner gun unleashes a devastating volley, 9 consecutive rolls of 4,5 or 6 routs the front unit. 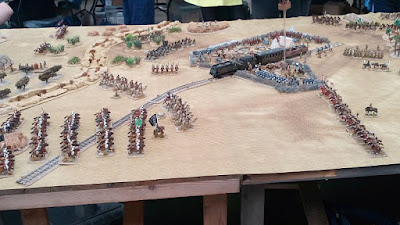 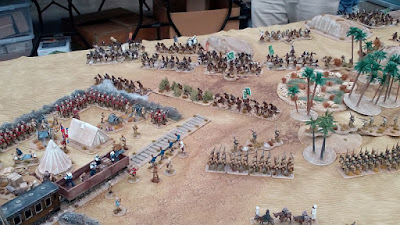 Mahdists launch a full out attack  but the Indians are in position. Could they stop the attack 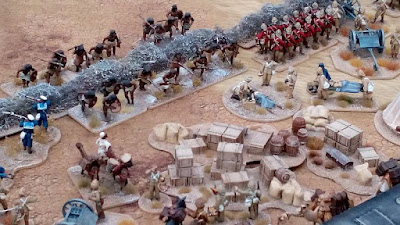 The skirmishers holding their section of the zariba are killed and the Mahdists are in amongst the baggage. 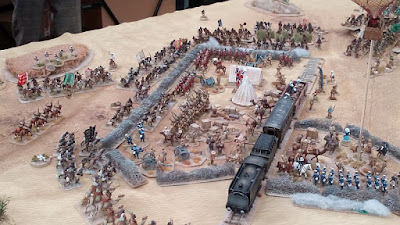 With Mahdists pressing on all sides a spectacular activation roll allows an Indian battalion to rush to the gap in the zariba and hold the line. Phew 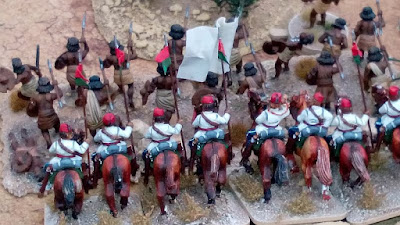 The Egytian Lancers have left their infantry and are attacking the Mahdists from the rear and creating bloody hell with the rear of the Mahdists, 2 units gone, about 10,000 to go. 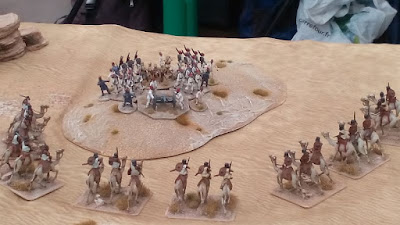 The remaining Egyptian infantry are trapped on a hill surrounded by skirmishing camel riders. They will be fine and medals will be awarded 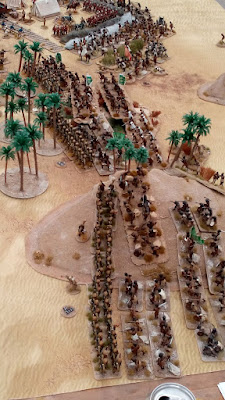 Faced with a huge and growing Mahdist horde the Indian brigade, 2 huge units in line, advance and attack. The railway must be saved. Doesn't go well but the Indians hold their own. The Mahdists break into the zariba again but face another Gardner gun that manages 8 consecutive hits and they are stopped. Gardner guns are fab when needed 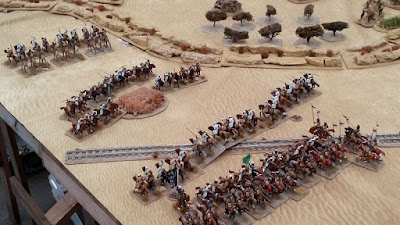 With the infantry holding on, just, the Bengal Lancers decide it is their time for glory and they charge the huge enemy cavalry force. 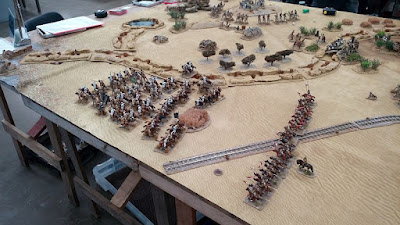 The 1st two lines of the Mahdist cavalry are completely routed leaving only 2 more lines left. They have watched the 3 lines in front of them rout through them. Time to leave. 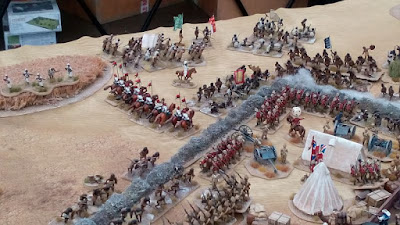 The zariba is holding, just when in true Errol Flynn style the Egyptian lancers smash into the back of the attackers taking out 2 more units. The Indians are beating their oppostion. The Brits have won.
This was a fantastic battle and a close run thing. Heroic actions by the Egyptian Lancers, the Bengal Lancers, the Gardner Guns and a single Indian Battalion saved the day.
We talked to a huge number of people, they all loved the battle, The battle mat from Tiny Miniatures was a resounding success and Dave should have charged commission. And then at the end we were told that we had come 2nd in the best club demonstration game. There was no 2nd prize but it was nice to be appreciated. The table that won was, in my opinion, better than ours (more of that in part 2) but I think that there were better games than it. The standard was very high.
My best convention day ever and we will be at Partizan 2 in August and at Battleground in December.