I've been adding to my VBCW forces recently and have now completed the Fascist forces of Lord Percy as he strives to reform the Kingdom or Northumbria. I say finished but obviously that isn't true Let's say finished for this campaign season. As we left it Lord Percy had sent for German reinforcements to counter a rebellion on Lindesfarne. The Germans captured Lindesfarne but got butchered in the follow up battle of Belford Wood by the Belford cricket team and were forced off Lindesfarne to regroup further South.
This sordid affair caused a much larger uprising in the south around Hexham where the Anglican League seized control. I now have 3 factions in action with the Dinnington Miners Collective between Percy and the free city of Newcastle.
The final figure is Lord Percy's personal standard waving the Northumberland Flag 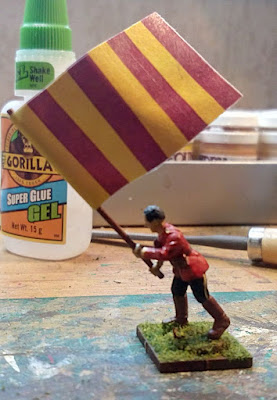 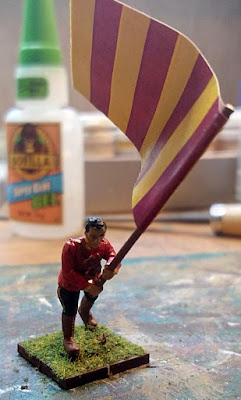 Clockwise from bottom left. Northumberian Rangers, armoured cars and tank, German naval brigade, Northumbrian Police immediately below them (Police are always tricky as they are the good guys but are in favour of law and order so have to end up with the Fascists), Lord Ridley's estate workers, mortars, the Hellfire Club (upper class asshole types) and the BUF bottom middle.

Next time the miners.
On a more personal and real world note, last night MP Jo Cox was murdered. I did not know her and she wasn't my MP but I am personnaly offended. This is not how democracies work. Our representatives are sacrosanct. With the EU referendum coming up I find myself becoming more political. Normally I don't trouble others with my opinions, and relax I'm not going to now, but this vote is the most important one in British history and the consequences will decide the future well being of our country. If you are a Brit then don't forget to vote on the 23rd