With the exception of some Bengal Lancers I'm getting for Christmas I have now finished my British Colonial Forces and plan to run a campaign in the near future. The campaign will be very much in hte style of Ryder Haggard and merge Zulus, Mahdists, Jungle natives, Boers and NW Frontier Pathans onto a single continent and launch my army at them in a series of skirmishes and large battles.
Enough waffle onto the figures which are fairly generic men of stout heart (i.e. I made the uniforms up somewhat).
Once again the photographs are pretty poor but I declined a camera for Christmas and will work on the lighting and set up before the Challenge starts

Bengal officer and some rugged types (Artizan and Foundry) 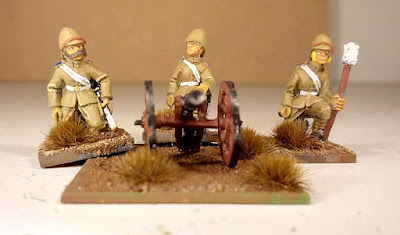 Not feeling very musical today but I am reading "The Martian" by Andy Weir and it is fab. Really well written. I don't do Sci Fi books, nor Fantasy, but this is Robinson Crusoe on Mars and is a cracking read.
Posted by MartinC at 21:19