Successor Action little bit South of Troy, off the A684

The Old Guard met today for a massive 15mm battle using Hail Caesar. Me, Stig, Pete, John and Stu brought our armies and Angus rocked up as a mercenary general.
We fought Seleucids vs Antagonids with me, Stig and Angus being on one side and the other 3 reprobates the other side. 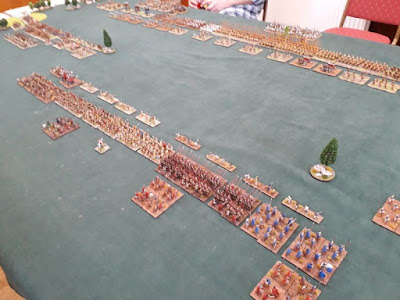 It was a fairly large affair. This is our centre, Angus, and Stig's left wing, facing John and Pete. 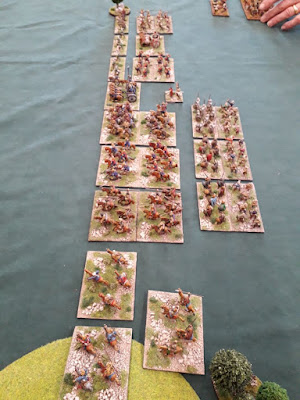 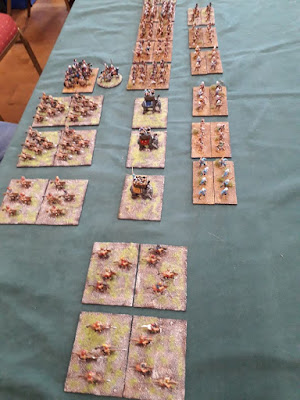 Pete is a mix of cavalry and elephants 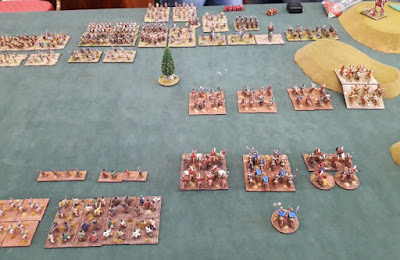 Over onthe right I'm facing Stu. We both have lots of cavalry and while I have some light infantry Stu has elephants and Galatians. I'm out gunned and out matched. This could be tough 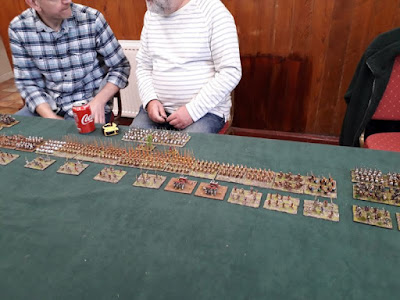 John and Pete discuss tactics. John's will be to sit still and wait for others to do the fighting 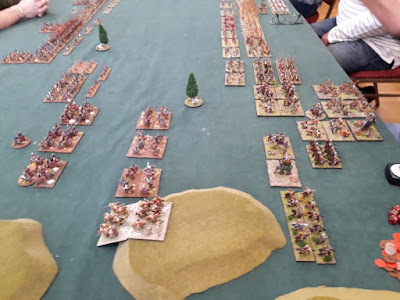 I advance and my horse archers open up 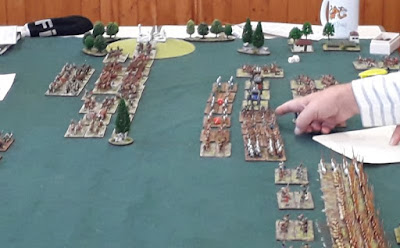 Stig and Pete both advance and square up to each other 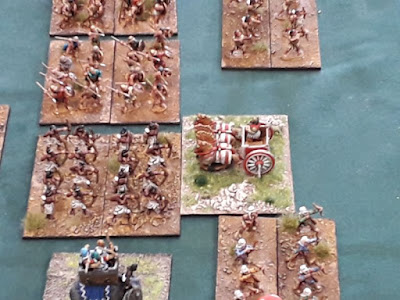 Stig unleashes and scythed Chariot which does bugger all 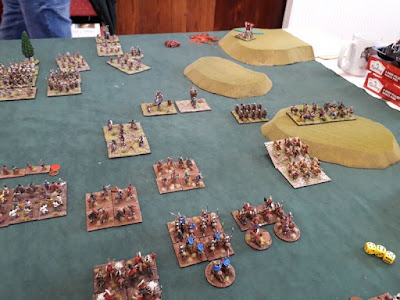 Stu advances and i fall back. He has moved his medium cavalry and elephants forward against my light cav. A mistake 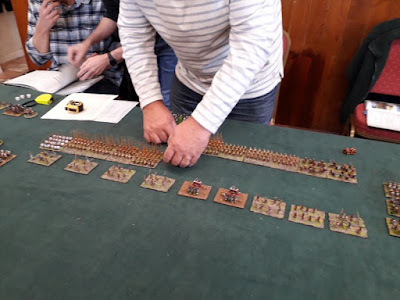 Stop the presses. John is advancing. All plans are now out of the window 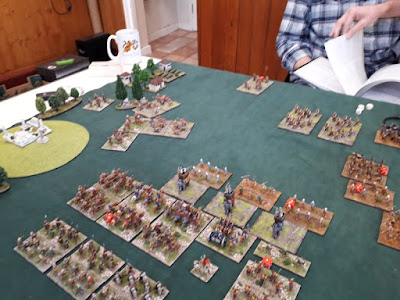 Stig and Pete get to work with a massive melee 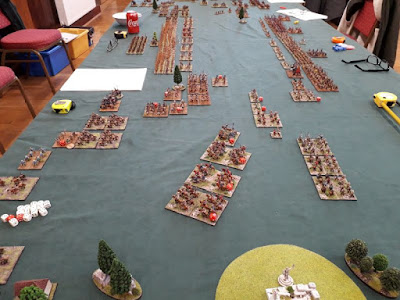 Stig wins and Pete is on the ropes 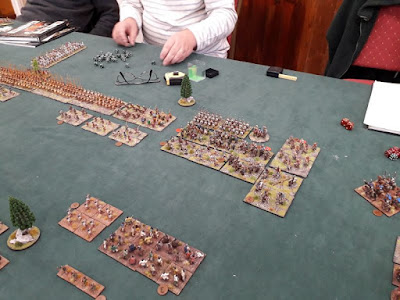 Stu is moving up his medium cav, Galatians and phalanx against my single unit of light infantry. I am Daffy Ducked 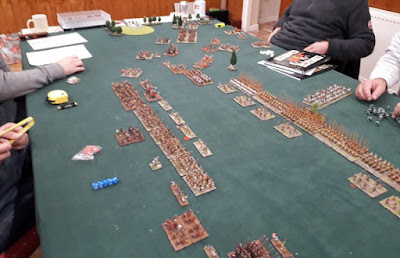 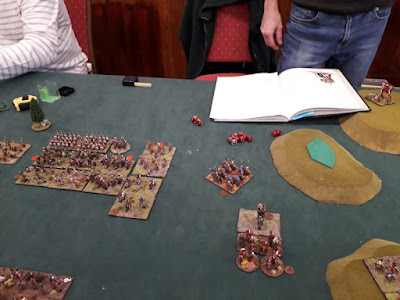 On the right it's become a chaotic scene but I've burst through the elephants  and am about to hit Stu in the flank.Better than that Stu charged my light infantry and not only did the buggers stand they forced him to retreat disordered. Next turn my catephracts will do him over 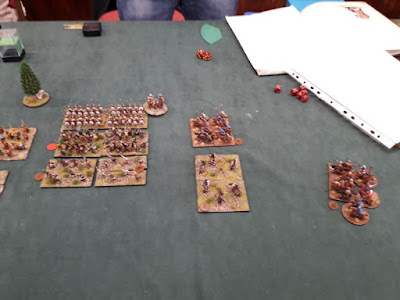 And they do. 1st the medium cavalry go home. If i can smash his flank then I can stop this 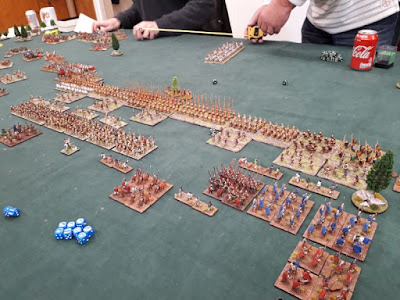 THIS. John has launched is scythed chariots and an entire pike block has melted. Angus has charged Johns elite phalanx with Galatians and Basternae and John killed them all without breaking sweat 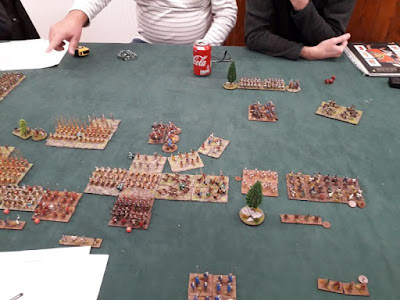 I'm round the back, Stu's division has broken but the melee in the centre has been brutal and I'm too late, i turn too late 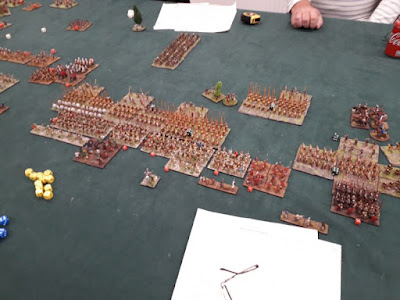 because John is stomping all over Angus 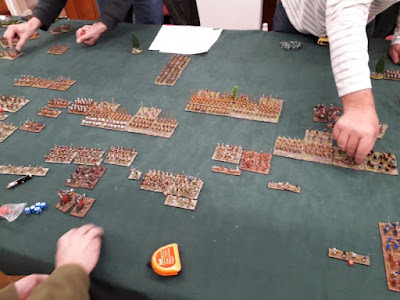 We lost, we made loads of mistakes in the rules but by the end had got to grips with it. A fantastic game and a close run thing.
On the other table James and Dave and ian fought a Falaise Pocket battle, looked good but didn't take a photo
It was supposed to be a double gaming weekend but catastrophic weather on Saturday meant that i couldn't get to Matt's dungeon for the Scottish invasion of Cumbria. Very disappointing indeed