The weather broke, still nice but less mad hot. So I managed to get some painting done. I'm back on the army of Mithridates and his quest to destroy the Roman Empire. He had a very diverse army, interesting to paint and gives me options for different army. The damn varnish went cloudy, on a bright and sunny day. I've spent 10 years varnishing with matt car lacquer and never had a problem. Move to proper modelling varnish and it's rubbish. Back to Halfords I think. I had to go back and touch up the black bits, hair mainly, post photos and they look OK. 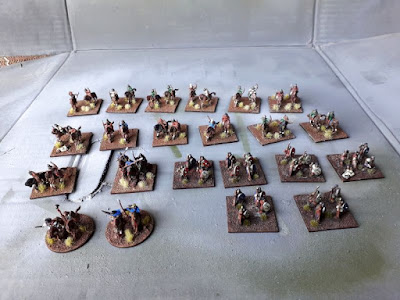 All the figs, on 40x40 bases with a couple of generals on circular bases. These can used for Impetus  (don't like impetus), KoW (keep losing at this), Too the Strongest (yet to play and looks a bit linear) and Hail Caesar (never played).

Sarmatian Horse Archers - enough for an army on their own 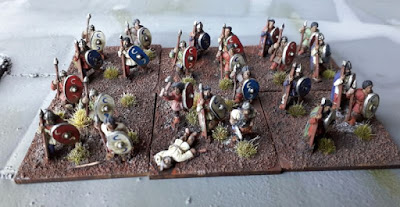 Couple of bases of Generals and a base of Cataphracts

All are Forged in Battle with the exception of a couple of horses from Col Bills. Really loving this and have plans to buy some more 15mm at the Other Partizan too give me a couple of armies to fight each other or a really massive army.

Email ThisBlogThis!Share to TwitterShare to FacebookShare to Pinterest
Labels: Forged in Battle, Pontus