About 18 months ago I purchased some 10mm Danes and Prussians from Pendraken with the aim of trying out something new. I found the painting a pain and not much fun. I also didn't really like the rule set I'd picked (they Couldn't hit an Elephant from 2 Fat Lardies). So the idea petered out. You can see some of my work here.
Any way I was trawling through the blog of my Secret Santa recipient and he (or she) has a lot of 10mm stuff and it repeaked (is that a word?) my interest. So I dug them out and have spent a couple of days finishing of the Danes. I now have just over a completed division at 1:50 figure ratio. 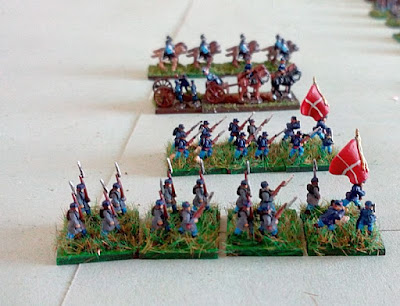 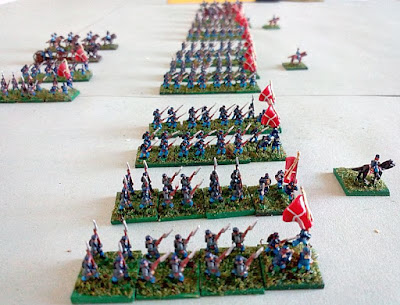 I have almost 7 infantry regiments, 2 half regiments of dragoons and 3 field guns with limbers. Not the biggest army in the world but should work well on my small table.
I have the same number of Prussians to paint and they have the challenge written all over them. The overall plan was to fight the beta version of WW1 set in the 1860s - and 1870s with the various powers resisting or supporting the the unification of Germany. Pendraken have lots of these forces.
I'm off today, had to fix the guttering whilst the weather was nice. That is hopefully done so I'm going to write some rules this afternoon, I find bought rules somewhat underwhelming and tend to nick the best ideas and incorporate them into my own.