The raid on Abu Qurqas by the Brotherhood had given them the map to the secret Tomb of Rameses, the hero of Kadesh. Caernavon, Carter and 3 of the Brothers raced to the tomb and stood at it imposing entrance 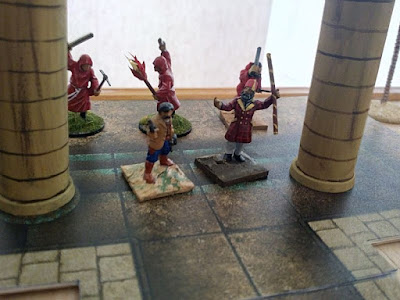 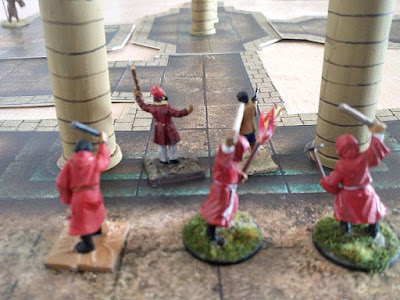 As the advanced into the tomb they were immediately confronted by a mummified priest. Carter fires his pistol  but missed and Douglas advances and attacks with his club and flaming torch. Douglas sets the mummy on fire but the mummy knocks him out. Henry steps forward and trades blows with the mummy before smashing it to the ground with his club. 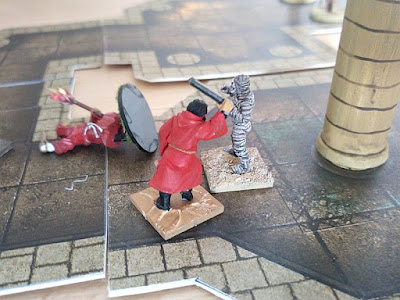 Carter searches the chamber and finds a chest containing the Spear of Osiris, the only thing that can kill the resurrected Rameses.
Douglas is revived and the party advances into a room with 2 statues of Royal Guards. The ground shakes and the 2 statues leap to forwards.They attack. Douglas quickly drops his attacker but Henry is KO'd. Carter fires his pistol and misses. Thomas steps over Henry and attacks the guard. They trade blows and Thomas kills the guard. 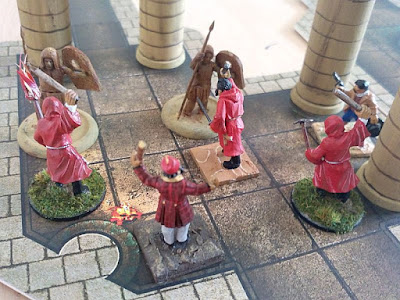 Further into the tomb the party stumbles a horde of skeletons. Doug is knocked down and Thomas and Carter draw their fights. Caernavon reaches over Doug and pushes the Skeleton back before he can kill Doug. Thomas kills his skel but Carter is getting nowhere against his. Douglas gets up. The fight continues furiously and Doug and Thomas eventually kill their skels. 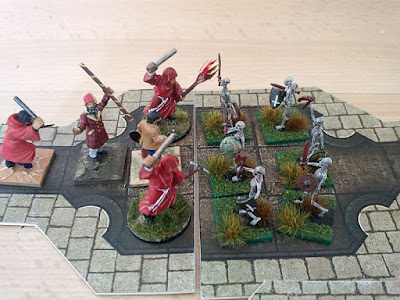 They advance and Thomas is knocked down. Carter kills his skeleton but Douglas is stabbed through the heart by his opponent and drops to the ground dead.. 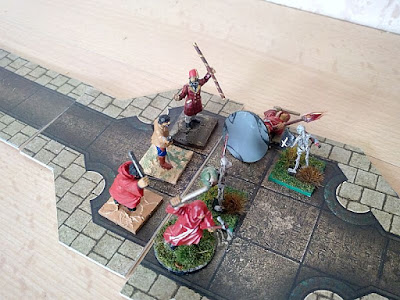 The brotherhood finish the last skeletons and Henry picks up Douglas' torch. They advance into the chamber of Sobek the Crocodile God and are faced by a 12 ft Nile Crocodile. Thomas and Henry run to either side and Carter opens fire with his pistol but misses. The croc turns to face Thomas but he stabs it in the mouth. Henry attacks the croc from behind but with a lash of it's tail it knocks him to the ground. Caernavon attacks to no effect and Henry gets up and tries again but misses. Thomas attacks again and stabs the crocodile in the eye killing it.
Carter searches the room and finds a chest with 2 glass spheres in it filled with a green liquid. 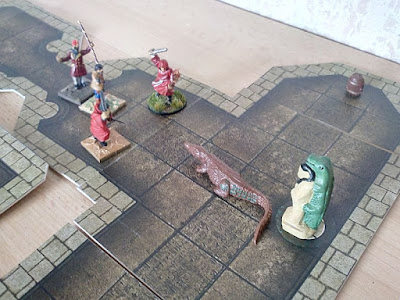 They advance into the next chamber and Henry hears a click under his feet. He looks down in horror as spikes shot up through the floor and pierce his foot. Henry is alive but is going nowhere. While Caernavon and Thomas tend to Henry, Carter searches the room and find as chest filled with a fortune in gems. Carter stuffs his pockets, this will free him from his debts and allow him to get away from Caernavon and the brotherhood 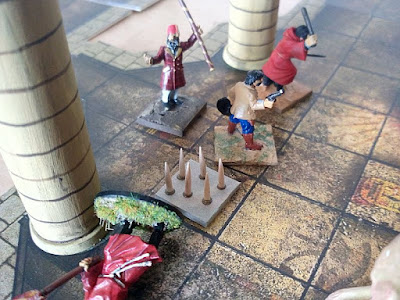 The next chamber holds a chest and Carter finds the Amulet of the Dead which Caernavon will use to resurrect Rameses. He gives it to Caernavon but keeps the Spear of Osiris to himself.
The remaining 3 advance to the east and enter the next chamber where without warning the roof collapses on Caernavon and Thomas. They dive out of the way and get up covered in dust but unharmed. 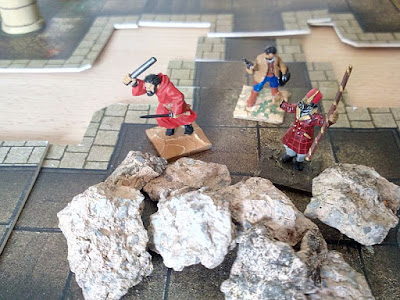 Moving downstairs then enter a split level chamber. At the bottom of the stairs a cloud of acrid gas rises from the floor. Carter looks to the left and sees a barrel filled with milky liquid. He kicks it over and it flows towards the gas. The 2 mix with a fizzing and the cloud dissipates. Caernavon nods towards Carter, glad to have brought the archaeologist along. 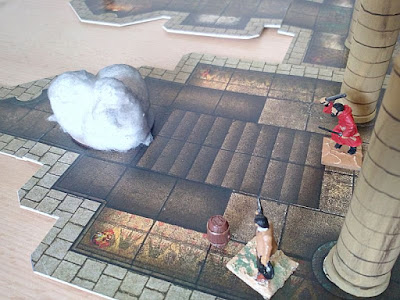 They advance through a series of narrow passageways when in the distance they see a mummy (no pictures). Carter throws one of the globes at the mummy and misses. It strikes the back wall and explodes into a ball of flame. The mummy attacks Thomas who beats it back. Carter throws the last globe and it hits the mummy, engulfing it in flame and singeing Thomas' beard.
Moving forward the ground starts to move and shimmer. A swarm of scarab beetles emerges and moves towards Thomas. He jumps out of the way and they run back up the passage 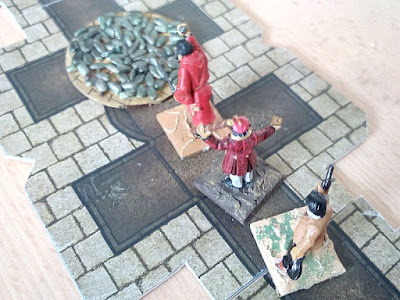 Caernavon turns left and enters a chamber where he runs into mummy. 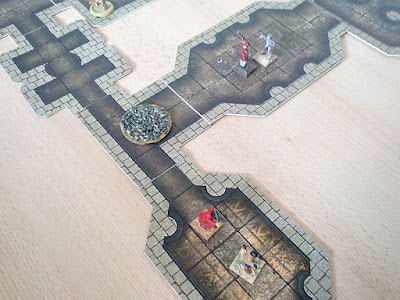 The mummy smashes him to the ground and as he attempts to rise he is engulfed by the swarm of scarabs, writhing and screaming as they devour his flesh. 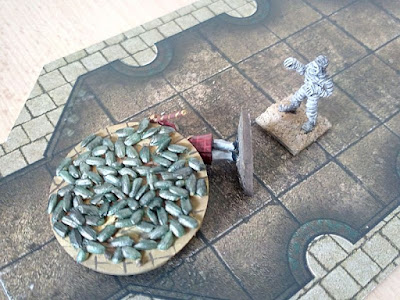 Further up the passage Thomas yells to Carter "Stop! We must go back.
"Are you Mad?" Caernavon is dead and there is nothing we can do"
"We can't fail the Brotherhood. Rameses must rise."
Carter turns to Thomas and shoots him in the stomach. 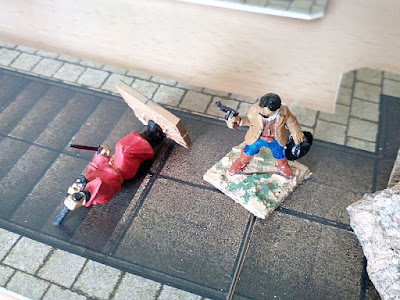 Carter flees the tomb. Hidden in the rubble of the collapsed roof Henry watches Carter kill Thomas. He begins to crawl out, knowing that he must get back and tell the Brotherhood of Caernavon's failure in the penultimate chamber and treachery of Carter.
The Brotherhood will return.
This was played with my Hack rules (I will post them eventually) and was great fun

Email ThisBlogThis!Share to TwitterShare to FacebookShare to Pinterest
Labels: Hack, Rush for Africa