With Blaxkleric getting out Lost Patrol I thought I'd have a go myself. The problem is I don't own the game, have no hex terrain tiles and no Sci Fi figs at all, never mind any 40K.
Still not to be deterred I made my own tiles with sides of 6cm, if you don't know how to cut hexes you need a compass. For 6cm sides make the circle 6cm radius. once you've drawn your circle move the compass to the circle edge and make a mark 6cm way on the circumference. move the compass to the new mark and make a new 6cm mark on circumference. Repeat until you have 6 markes and returned to the start Join the dots and cut out. I made my tiles out of thick card from the covers of ring binders.
Once cut out I painted them with Wilko tester pots and some poster paints. Leaf shapes were stamped on using a carved potato, I was channeling my 10 year old self with making shapes and potato printing. 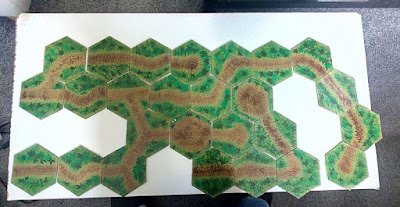 Of course the genius thing is that tiles can have 2 sides so I painted the other side grey and drew rocks with a marker pen. DaDaah a cave system 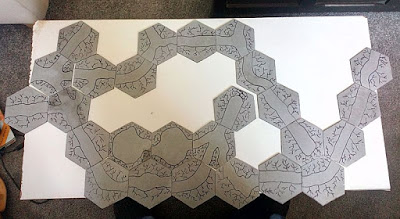 I then lacquered both sides and left to dry for a couple of hours. This was not long enough and they stuck together, which was very very annoying and a schoolboy error. The tiles are ok but have plucked a little bit.
So the next move was to play. I decided to have a safari of 3 women - Hetty, Hilda and Helga - with a female scout, Hebe trying to find their way out a Pygmy "infested" Jungle.
Tiles would be drawn at random and visibility was a maximum of 2 tiles down a straight path but blocked by curves. Once a tile was out of sight it would be removed and added to the pile.
Everytime a European entered a tile or remained in one a D6 was rolled

The Europeans started in clearing with 2 exits 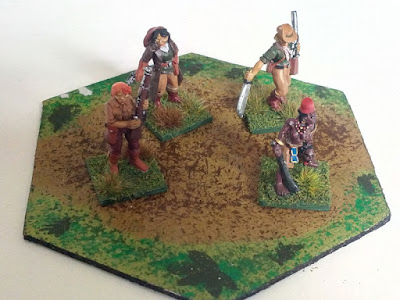 They returned to the starting clearing only to find it was no longer there, damn jungle. As they advanced around a bend Hilda was faced with a belligerent Pygmy but their fight was a draw and this stalled the advance. 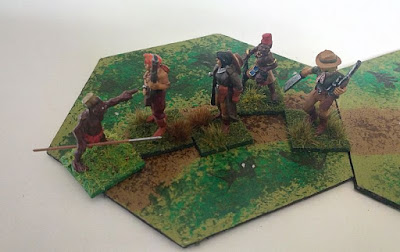 The next 2 turns saw Hilda still unable to kill the Pygmy and 3 archers and a spearman appeared to kill the Europeans. The Pygmies shooting was poor and the fights with Hilda and Hebe were again draws 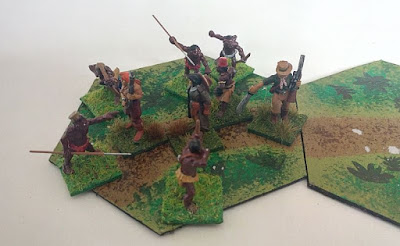 eventually Hilda killed the Pygmy on the path and the other 3  killed 2 more and advanced past her as she fought the last Pygmy. Helga advanced further and Hilda was faced with 3 more Pygmies. The Europeans were now spread out over the path and were facing Pygmies everywhere. Hilda was in deep trouble out numbered 4 to 1. Helga, Hetty and Hebe killed their opponents and Hebe ran back to aid Hilda, 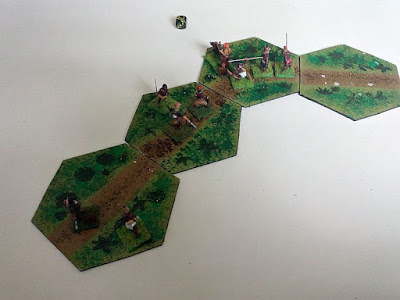 Hebe was killed but Hilda was still in their swinging. 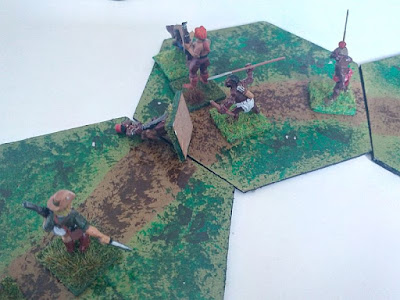 Helga is downed by an arrow from a hidden archer 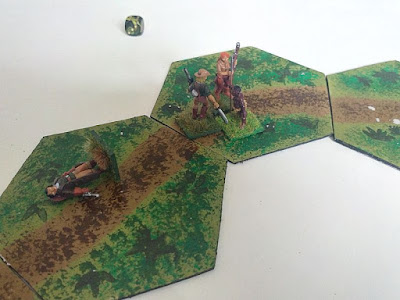 Hetty is then speared by a Pygmy and Hilda is finally overcome and falls to her knees with here arms reaching for the sky. 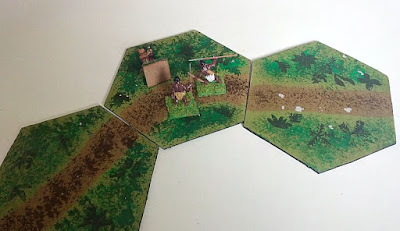 This was very enjoyable but needs tweaking. It was too hard to kill once you had one the combat and I will tweak that so that you can advance to the jungle faster.