Whilst I wait for the postman to deliver the next Vietnam upgrade I've decided to start my 1st Italian Wars ImagiNation campaign. This is based around 5 city states in Northern Italy circa 1500CE and uses my hex random map generator. This afternoon I set up the map 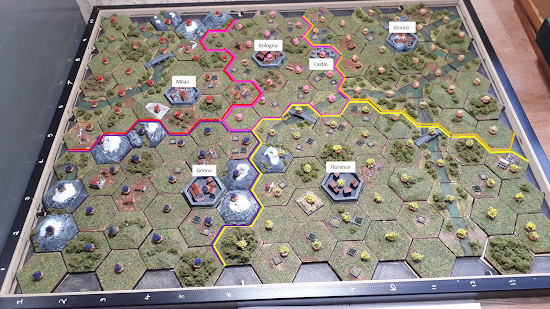 The map is built by positioning cities, at least 2 tiles apart. Then the terrain is randomly rolled with rivers and mountain ranges being filled in as they occur. Once all the tiles have been placed and any geographical irregularities removed the castle is added on a random grid location roll.

With the map finished the states begin to occupy their terrain, using coloured flower markers. THe capital and its 6 surrounding tiles are occupied first. This provides the standing army. The size of army that can be supported is based on the type of tiles for the capital and the 6 tiles.

all other tiles = 1 point

Each point equals 1 base of troops. Using Kings of War rules a troop = 1 base, a regiment 2 bases and a horde 4 bases. This standing army occupies the capital but can create a clone army ( that may be a different movie) that can move about the map. There are many towns on the map and 2 towns can make another standing army. Finally the castle is always occupied by a clone of the standing army and can also generate a clone army. Confused. Basically a country with a capital, 2 towns and a castle can field 3 armies as well as having permanently occupied capital and castle.

So the next move is to build your state. This is done by placing a marker on a tile that is adjacent to a tile you own. Mountains and rivers can be owned but can only be crossed at passes and bridges. It is therefore a mad dash to get towns, mines, river crossings and mountain passes.

The number of hexes owned by a State is important as they can be converted into mercenaries to fight battles along side your standing army. Points can only be used once per turn so if you are going to be fighting 2 battles in a turn you will need to split your forces.

So that is where I have got upto. Next is diplomacy (the bane of solo campaigns) and painting heralds to represent the armies.