Some random gaming and painting

Old guard met last weekend. Unusually for us we played different games and not one massive one. Ian and I played Lion rampant using 48pt Norman armies. 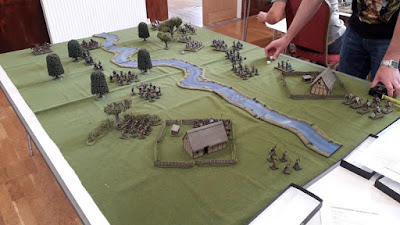 We played 3 games - 1st up bloodbath as it had been a while since we'd played. Ian won but it was pretty much last man standing 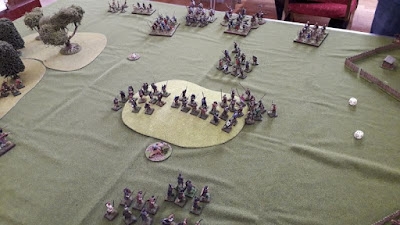 Next we played defend the hill and I won that pretty easily, hard to shift a shield wall from a hill. For the decider we play blood feud (think that's what it's called) and I launched an all out attack to kill Ian's leader. I got within about 18 inches and that was the high water mark. Properly slaughtered. So Ian won 2:1 and it was a fab gaming day 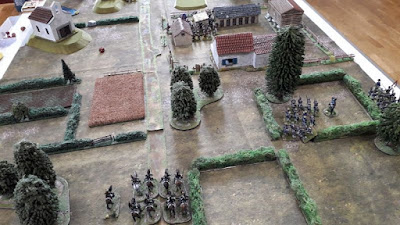 While me and Ian played 3 double sized games of Lion Rampant Angus and Stu played a single game of  Sharp Practice. Looks pretty but to be honest neither of them seemed to have control of their forces and they appeared to have to act in response to the random actions in the rules. Like random acts but they shouldn't define the battle - see Oak Ridge for the charge of the drunken union forces 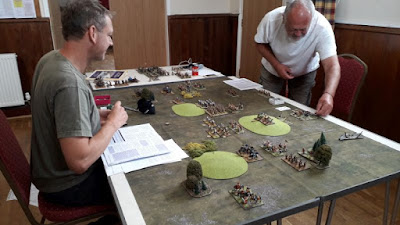 On the other table a couple of random old men play several games of To the Strongest. Pete was doing well until John got the Romans out.

Speaking of TTS. Pete has invited me to his palatial chateau at the end of August for my 1st game of it. I will be bringing my virgin Indians so bound to get slaughtered. Indians have lots of elephants and chariots but everybody else just rocks up in underpants. I have loads but typically needed some general types.I had some Xystron cavalry to paint so have used them 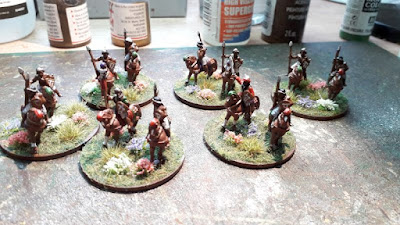 The 7 years war project continues slowly, not in the mood for lots of painting 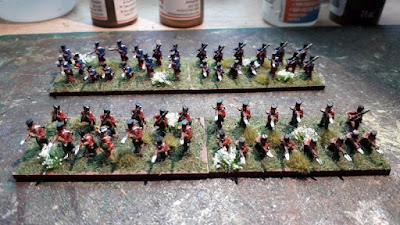 2 regiments of Grenzers (Hungarian border and mountain types. The Karlstadter-Lykaner Grenzer (in red) and the Banal Grenz-infanteri Regiment (blue). The figures are Old Glory and are OK but came with no command so I nicked a couple a figures from Pendraken artillery sets. These will function as light infantry but generally there isn't a lot of difference from regular infantry.
All good armies need artillery and the Austrians get loads. I've painted a couple of 12lb cannon and limbers. These are massive and on same sized base as an infantry battalion 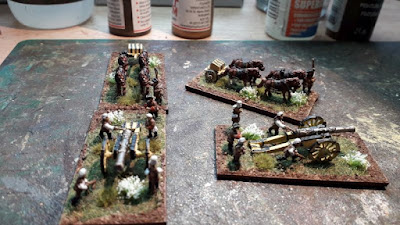