you left us last time with the map completed and the forces massed. Next I needed to work out the diplomacy. This was simple. There are 8 levels of diplomatic relations from 1 - Allies to 8 - War. I simply rolled for these on a D8

I have added the Pope, seems like an important chap, and I randomly gave him a Nationality, Bolognese. Whilst not taking an active roll in the fighting the Papal States will influence how others see each other. Diplomatic status changes each turn based on a D6 roll (1,2 improve, 3,4 remain same and 5,6 worsen) with some factors based on current status.

Being at war the strong Milan immediately attacked Bologna and Bologna moved to intercept. 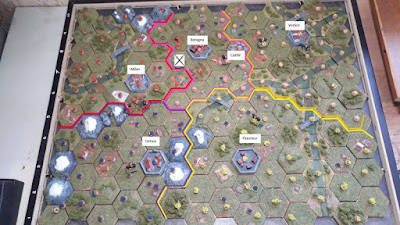 The 2 states met just outside Bologna and as the Bolognese moved in to the hex occupied by Milan they were the attackers. The hex was farmland so i limited the terrain to 1 hill, 1 wood and some fields. Other terrain types will be applied depending on the hex, for example a hilly hex will have minimum of 3 hills, etc.
So a battle was fought. Both sides could call on the full value of their terrain to buy mercenaries. As a result the Milan side was 50% bigger than Bologna. This will be a major problem. 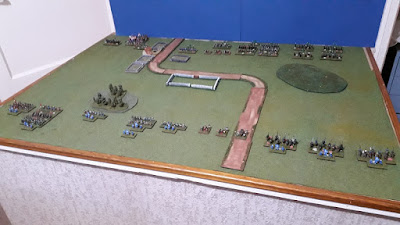 Bologna are the closest and are outnumbered in everything. They have cannon and aquebusiers in the centre, cavalry to the right and a pikeblock and halberders to the left. Milan's cavalry is mainly facing the Bolognese cavalry, they have cannon and 2 pike blocks inthe centre and a further pike block and knights on their right. There are 3 objectives, hill, wood and farm. 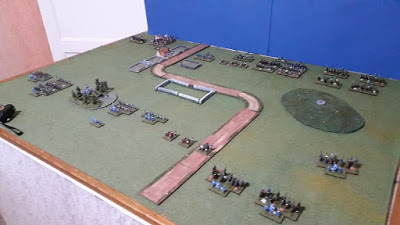 I should have set up the Bolognese differently as they are too spread out. But they make a general advance 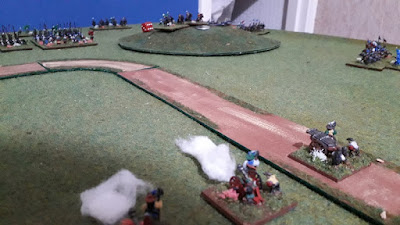 Milanese mounted crossbowmen take the hill and are immediately hit by cannon fire, wavering them and causing them to retreat. Once a cannon has fired it must roll a 4+ each turn to be able to fire again 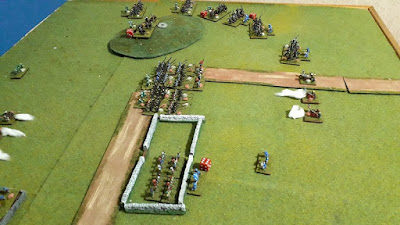 THe Milanese cannon have routed a troop of aquebusiers and they advance in the centre and with their cavalry. 2 regiments of stradiots clash and the Bolognese win but there are knights following up. 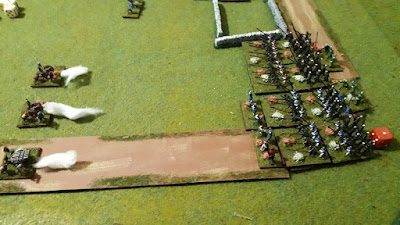 The Bolognese cannon  fire on the advancing pike blocks and inflict only 1 casualty. This could get very bad very quickly 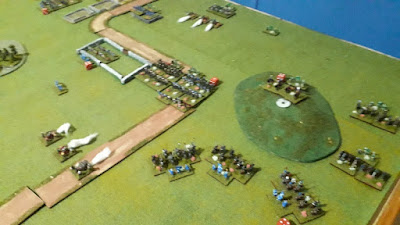 THe Milanese cannon are butchering the aquebusier units in the centre. Bologna are losing badly. But they have set their knights to attack 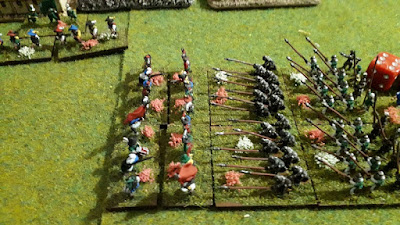 On the left the 2 pike blocks attack  sending out forlon hopes to cause a mess. THe Bolognese Halderders have been wiped out by a single charge of knights 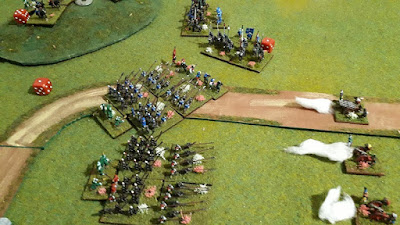 The Milanese pike blocks are ready to strike 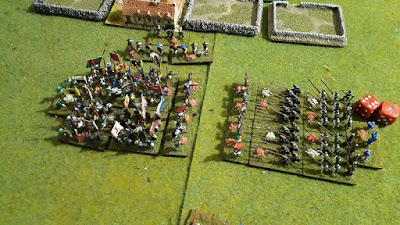 As are the knights and pike block.
THe writing is on the wall and the Bolognese leg it back to Bologna. A crushing defeat and Bologna is beseiged. Bologna (me) made a pigs ear of this. But is was the 1st battle and takes a while to understand the various strengths of the units.
Turn 1 ends. Turn 2 begins with diplomacy and Genoa come to the end of their allies and declare war on Milan. Milan is now fighting on 2 fronts against 3 armies (1 Bolognese army is trapped in Bologna)
On to turn 2, will Milan storm Bologna, Will Genoa