I know, you want to know what happened to parts I to V
Having bought a very large Pontic army in 15mm from Forged in Battle - lovely figs, over the last month I thought I'd start to paint them. I've never painted 15mm ancients before and these are a cross between Successor Greeks and Persians so they are going to be have to be pretty.
I have used a hybrid basing system. Most, well some, of the Old Guard play Impetus, only played twice and yet to be convinced, but some also play Hail Caesar and I'm a fan of Black Powder, so I needed to base them for both. That was a long and rambling sentence with suspect punctuation. So I've decided to base on 40x40 bases, 2 of which will combine for Impetus and individuals can be used for Hail Caesar, with skirmishers on 40x20. This gives an immediae problem for Impetus as skirmishers are 3 figs on an 80x20 base. That would give a stupid mix of bases with 2 and bases with 1. So 2 figs per 1/2 base it is.
I started with some Armenia skirmishers with slings and bows

2 or 4 bases of slingers 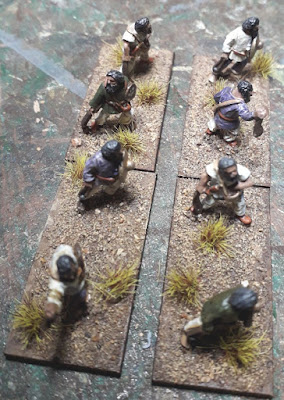 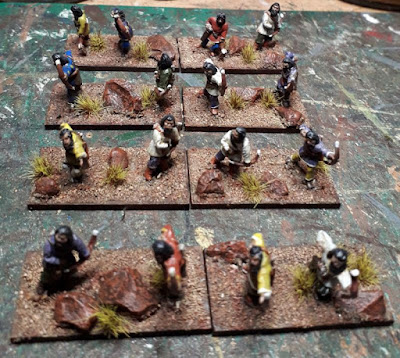 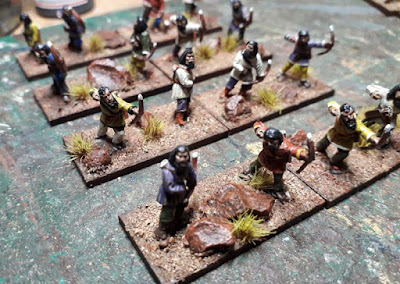 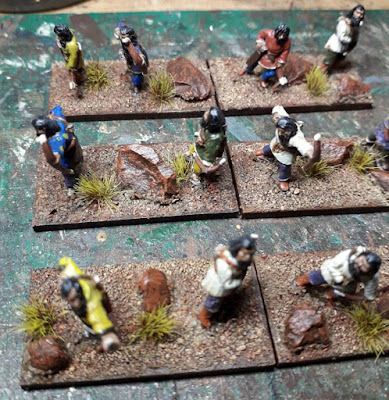 Overall I'm pretty chuffed with them, they are not as fab as I would like but they are, as always, better than the photography. I really can't be arsed with photography - which is weird as I have a blog to show my photos.
The varnish I use, Matt lacquer for cars from Halfords is slightly shiny but not too bad.
Galatians next, 5 figures per base giving Impetus units of 10 figures. I have enough for 6 bases, this is going to be a very big army, at least twice the size of a Basic Impetus army.

Email ThisBlogThis!Share to TwitterShare to FacebookShare to Pinterest
Labels: Forged in Battle, Pontus