Today I went over to Matt's dungeon for another massive ACW battle. This time we were recreating the battle of Seven Pines in 1862. The day started ignominiously as my foot slipped of the brake onto the accelerator as i was parking and I drove into the back of Matt's car - Mortified but no real damage.
On to the battle - it was another massive one with 20 infantry regiments aside plus cannon and cavalry. we were using Matt's reinvention of Bolt Action rules and they worked really well. Infantry run off as a result of casualties and return when rallied - very much in line with the ACW. Activation was by the dice bag and we had more units than dice meaning that you had to be a proper general and manage your forces. They are great rules.
Right are you sitting comfortably, this was a 7 hour battle 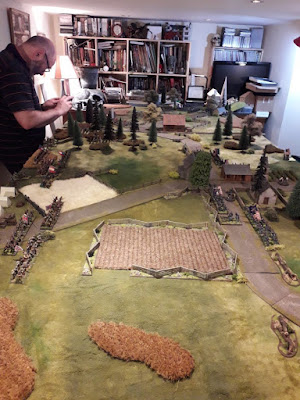 The 11ft by 5 ft battle field. I'm union on the right and have to defend the 7 Pines cross roads. I only have 2 brigades with another at the top. I am outnumbered by Matt's rebel scum. We both have 3 brigades as reinforcements and Matt has to capture the cross roads. 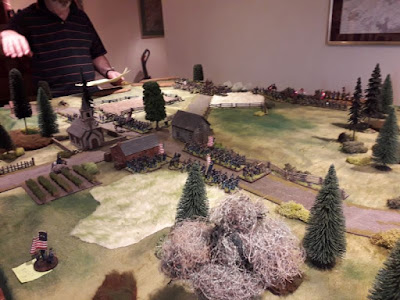 The cross roads, i have taken up defensive position behind the snake fencing 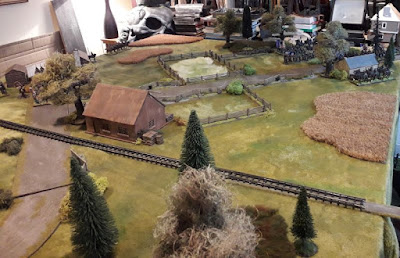 Entering from the North my brigade. if i can find room I can bring on 3 more regiments - I never found room 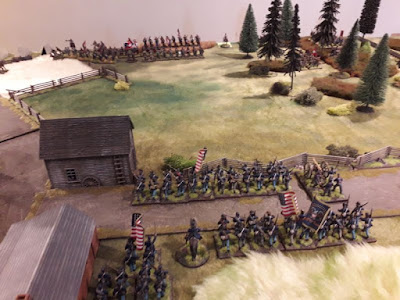 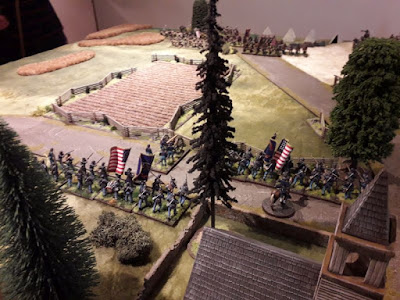 My left flank, couple of regiments and cannon. The rebels have advanced through my camp and I'm to hold the line and prevent a disaster 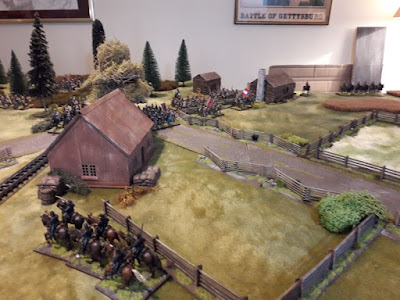 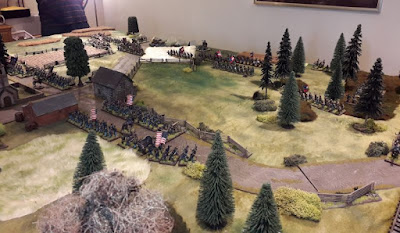 THIS IS GOING TO BE BAD. Matt has brought everybody 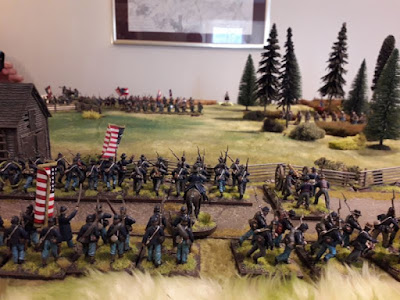 "Gentlemen. Prepare to defend yourselves" 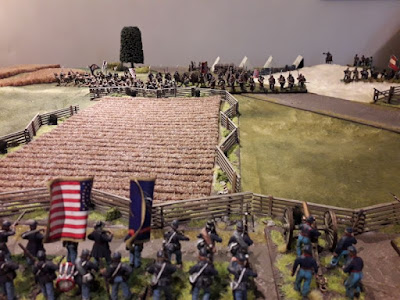 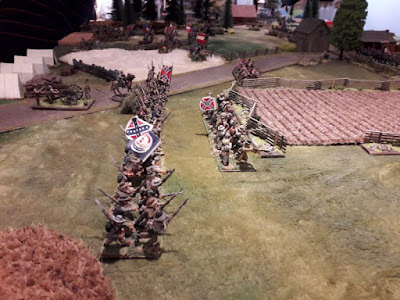 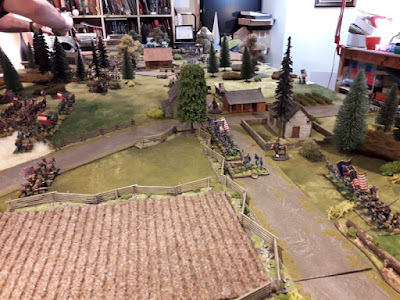 Te view down the line was awesome, we kept stopping and staring 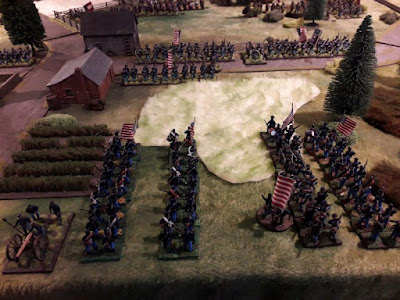 Just in time my 1st brigade of reinforcements arrives 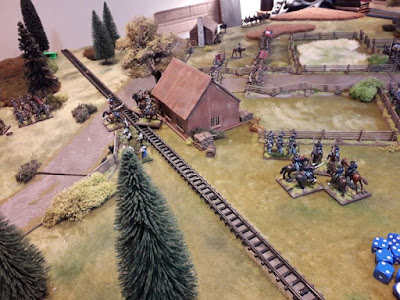 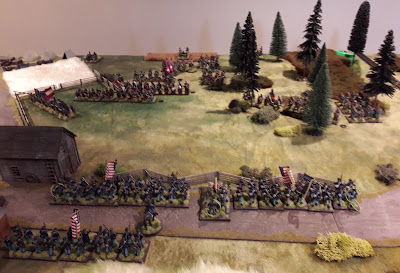 The rebels close in the centre 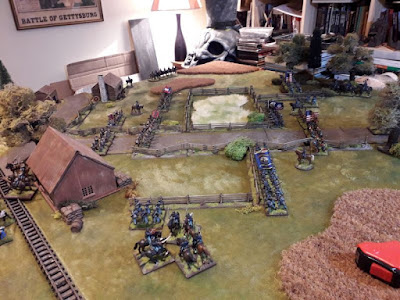 We face each other off  on the right 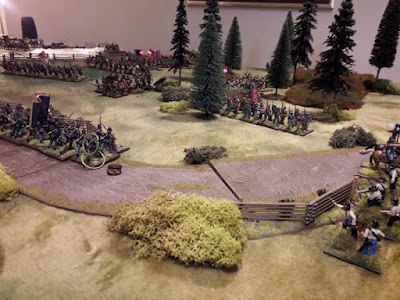 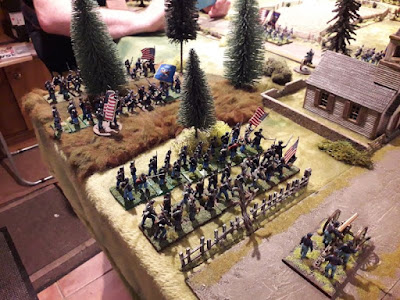 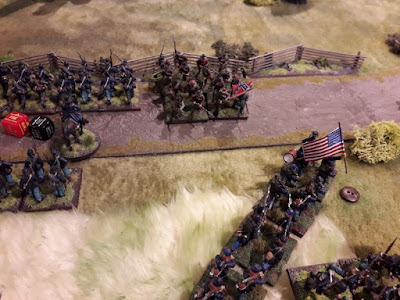 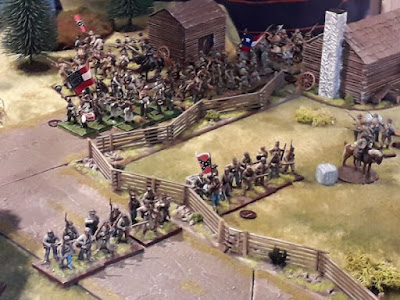 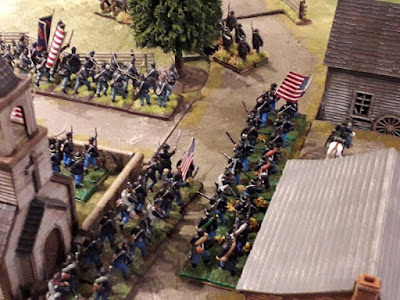 In a reckless move I advance 2 regiments up the road to face the enemy in march column, can't fire and crap at fighting 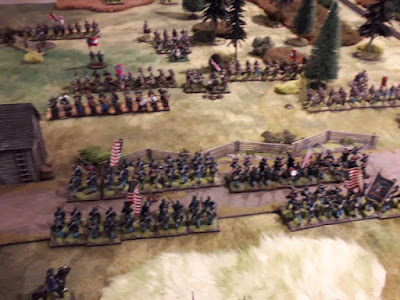 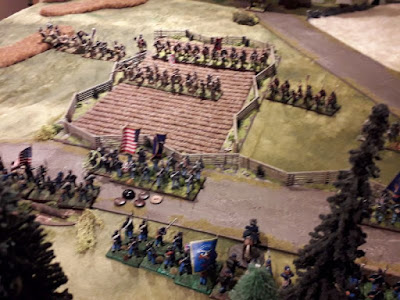 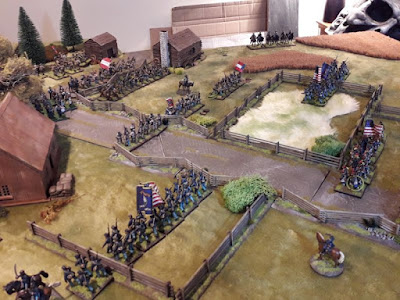 On the right I have routed a regiment through the reserves inflicting a pin on all of them. I use the opportunity to advance - seems like a good idea 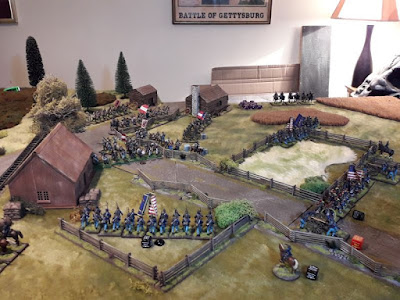 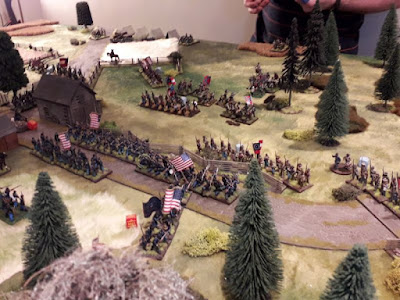 In the centre Matt has mad the fence. This is going to to tight 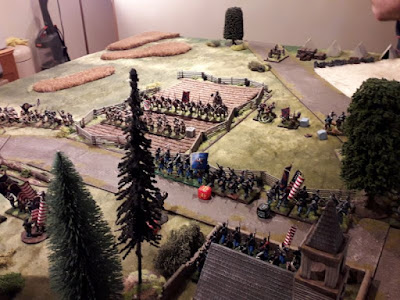 Worse yet my left has started to crumble 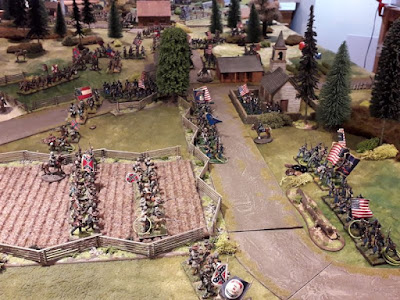 The 2 units in march column have deployed in line a and pouring enfilading fire in 2 directions, it is very effective in the centre and Matt's attack stalls 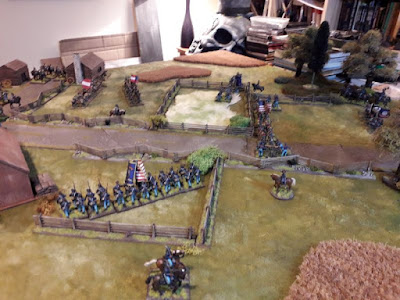 The right - all me. I have 1 routing unit but Matt has little left. I still have 3 regiments to bring on 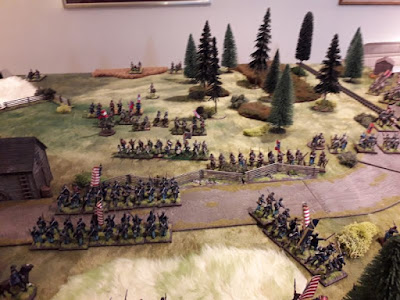 The centre. Matt is still at the fence but only has 2 units not routing 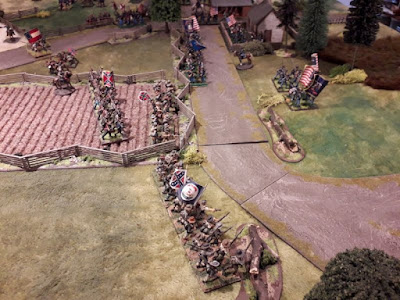 The left. Matt has won here but won't get to the crossroads.

Brilliant battle and a minor victory for the Union. The rules work very well indeed and could be the best I've played. Quick (I know 7 hours but it was a vast battle) and with the proper feel for the period.