Today most of the old guard met and fought the next battle of Operation Pomegranate, the taking of Noyers Bocage. This is James' main focus of his collect and he put on another great battle. James was the Germans and umpire, fielding constant multiple questions from the Allies - Me, Angus, Ian, Roy, John and Pete. The German deployment was done by Dave from London. We each received an infantry platoon and a 3 shermans with me and Ian under captain Angus getting a HMG platoon and a pioneer platoon. John and Roy under Captain Pete got a heavy mortar platoon. 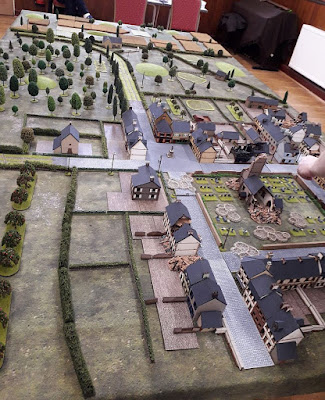 The beautiful battlefield. Noyers is to the bottom and we will enter from the top - Pete's command and the left - Angus' command 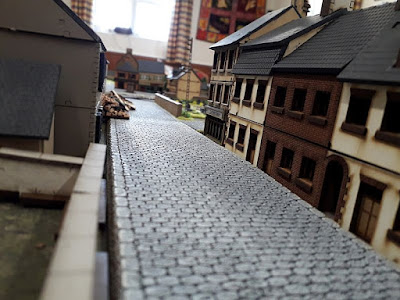 How cool is this 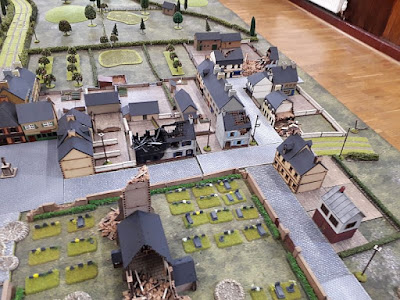 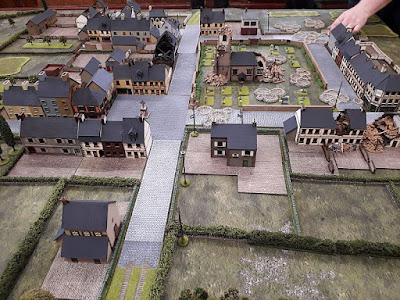 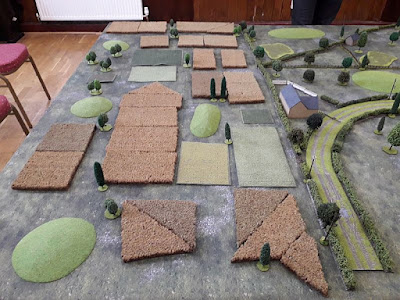 Pete's force will enter through these fields 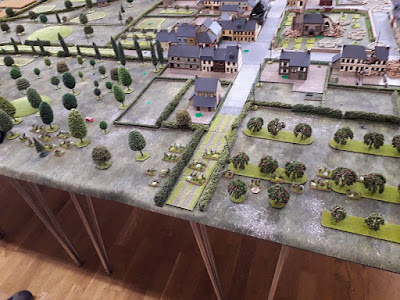 We decide to attack before dawn so infantry only - Shermans can't see at night. We (Angus' lot) advance close to the town 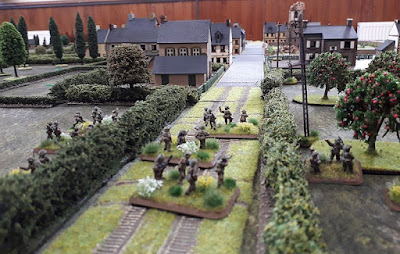 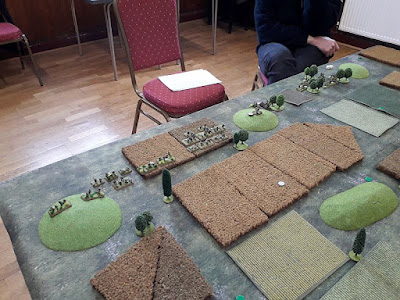 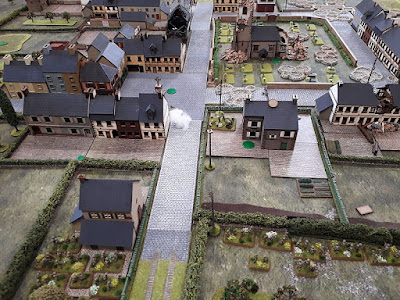 We advance to the hedge line and the empty house. German AAA and AT appear. THe single house is occupied by a german platoon 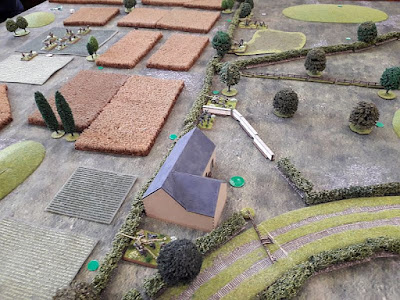 Pete's lot are facing lots of AT of various sizes inc 88s. THe counters are collected by the Brits as they advance and can be used to call up artillery or reinforcements 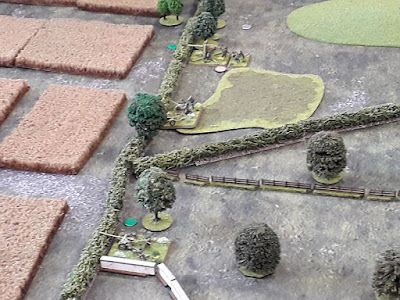 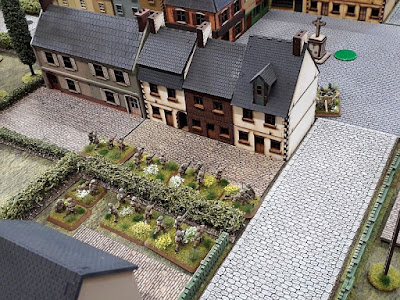 My platoon advances and prepares to assault the house. I have to pause to attack and take hits from next door. I charge home and the house is bloody empty. 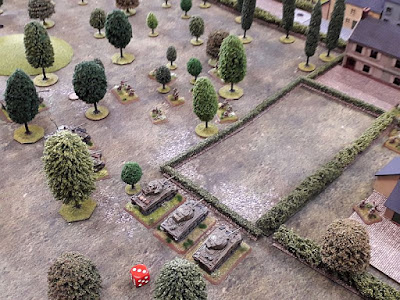 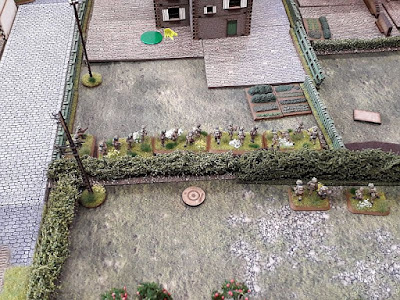 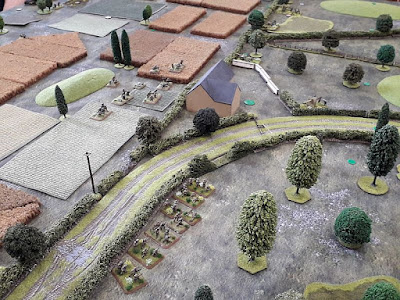 Supported by concerted artillery bombardment Petes force advances to the AT line and takes it. John is closest and most advanced. Roy charges home in the centre and clears the house. Pete's men have been pinned and are stuck at the top 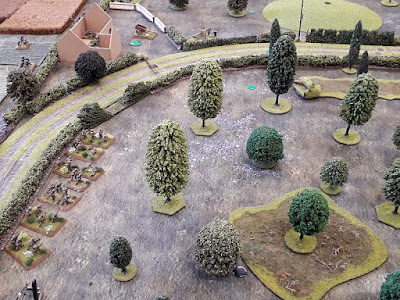 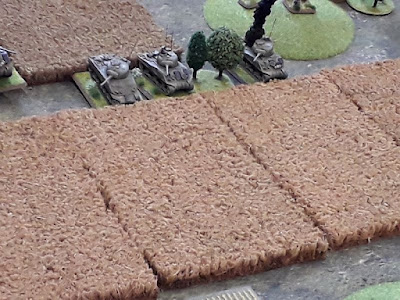 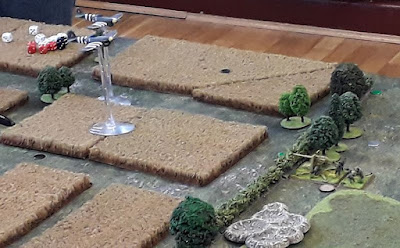 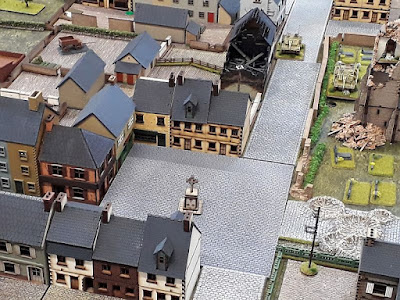 Stugs appear in the town 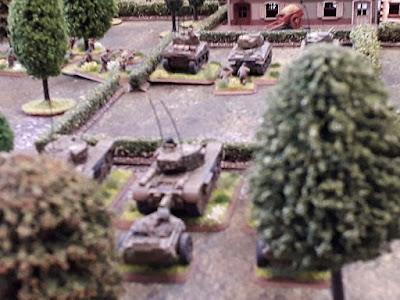 We are struggling to clear the houses and send for Crocodiles 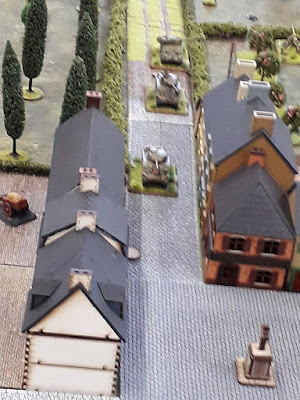 Ian advances his tanks down the street. I'm in the brown corner house and we've brought on our pioneers who are in the closest house 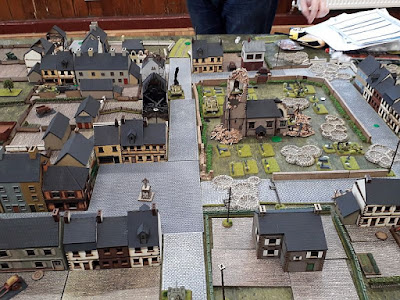 We take out one of the Stugs and have captured the lone house at the front. But SS have stormed out of neighbouring house and kicked us out. We have troops in the the houses on the square 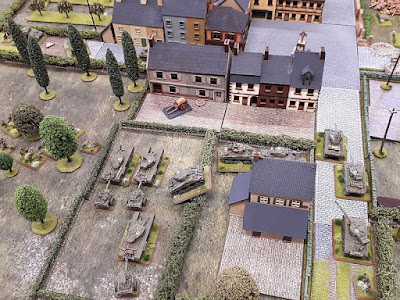 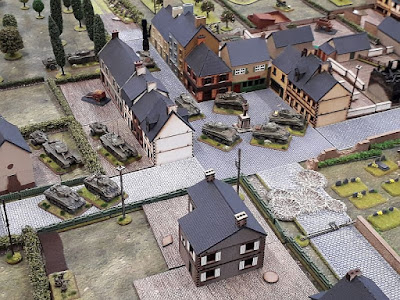 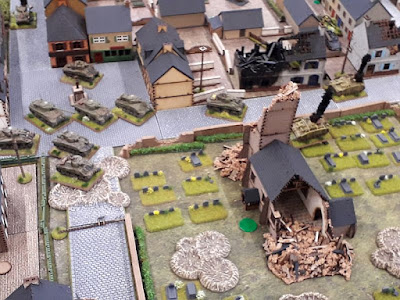 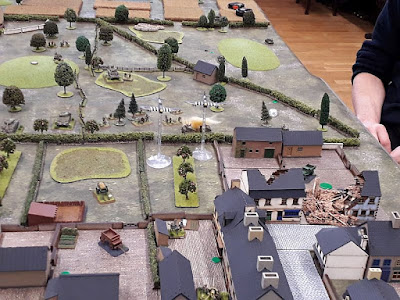 Pete's forces have cleared a 2nd line of defence. I say Pete. it was Roy, whose platoon, fired up on Dutch courage stormed the hedge line. John attacked the hedge flank and the Germans were toast. Pete however is still stuck at his jumping off point, right at the top of the map. He will be mentioned in dispatches for all the wrong reasons while Roy will get medals and Alker Sletzer for his hangover from all the dutch courage.

It was an awesome battle played in the right spirit, ran brilliantly by James. I'm so taken by the game that I've bought a British Para Company and support. Expect more battles