The Old Guard are a bloody nightmare. They keep giving me ideas. Pete has started painting 28mm Naps (very nice). Dave has millions of 28mm French Naps (very nice). John is keen to do the Peninsular War in 28mm. I've never done Naps, they just seem impossible to paint well and you need thousands and thousands.
It gets worse, I bought some in the flea market a few months ago. Just over 4 boxes of Victrix for £40. So I have an army, I have friends who want to to play. I had planned for this years Analogue Hobbies Painting Challenge I had planned to paint fewer figures to a higher standard. A perfect storm. Bugger.
So here we are. I have added to the collection with a box of Perry Light Dragoons, a regiment of Warlord Portuguese infantry and some bits to make up full regiments of Cavalry from Foundry on my visit on Tuesday. I've spend a couple of days making up figures

3 regiments of foot. A mix of metals from a Northstar lucky bag and Victrix Peninsular and Waterloo centre and flank companies. Obviously the Waterloo figs have the wrong hats but using oilskin covered shakos and bare heads I've made 3 full 24 man regiments. I really really hate making up plastics with 2 separate arms that connect to a single gum. It's the chore. Manged to do most with marching arms - much easier

Portuguese regiment (all marching - doddle and nice figs), Highlander Regiment (Camerons) with a couple of metal figs from a different Northstar lucky bag. The general is Perry Miniatures 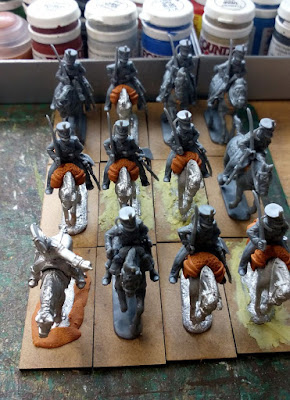 Perry Light Dragoons. These should have been Hussars but I bought the wrong box. There are enough men to make over 2 regiments but only 14 horses. Luckily I had some spare horses so I made saddles, sheepskins and bedrolls out of Milliput - really pleased with it. These are 1812 onwards pattern uniforms but they will be fine. Officer is from Perry Brtish Nap Command. 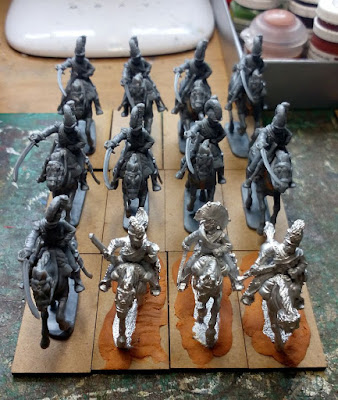 Finally the other 1/2 of the Dragoons box, in Peninsular war uniform and 3 command figures from Foundry.
I have enough figures left for a couple of regiments with later uniforms suitable for Waterloo and 3 foot artillery pieces that I will need to make up.
I done the boring and annoying bit. Now the really hard bit, will keep me out of trouble. Also ona really happy note I've been promoted at work to senior management. I'm in charge of post graduate studies in my new larger school. Yeah me.