The Martyrdom of Archbishop Braddock - By Jimmy Olsen our embedded reporter

It was a bright sunny Sunday morning in October when Archbishop Braddock preached war to the congregation in St Andrew's Church in Hexham. He warned of the sedition of the miners in Alston and how they threatened the peace of Hexhamshire. He called the population to arms and marched them in a great crusade to Alston. I was embedded into the Army and stood by Archbishop Braddock's side throughout the great battle
As they crossed Alston Moor a motorbike scout rode up to the column and saluted the Archbishop. "Your Grace the miners are holding a parade in the town, displaying their arms. We snuck in and stole their bunting though. It will be a meagre parade. There are supplies of lead all over the town that we can use." 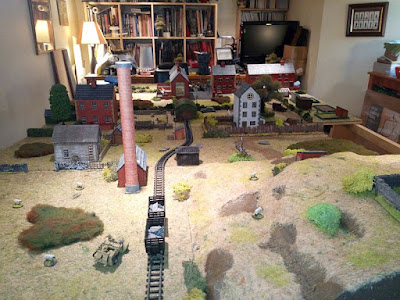 View of Alston from Alston Moor 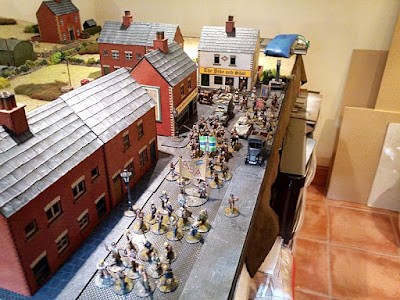 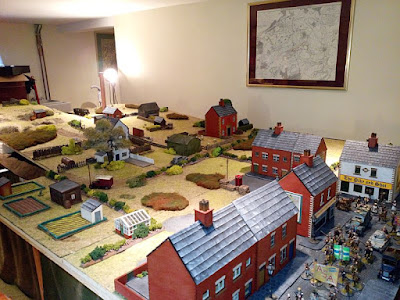 The approaches to Alston

Braddock asked "Is there anything else I should know?". "Your grace they have a 60lb howitzer, but I bet it doesn't work. Also they have a lot of pigeons, which is a little weird." 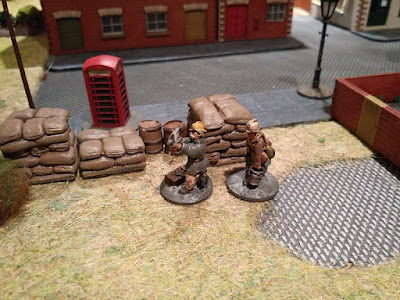 Braddock ordered the advance and the Army headed for the hills that overlook Alston. 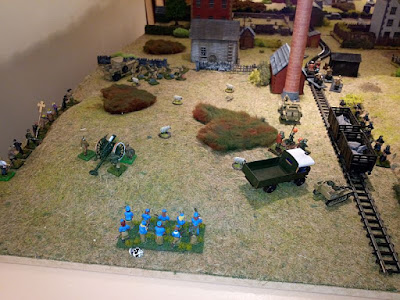 The Army advances. The WI have received a letter from home. It is a scandalous piece of gossip stating that Mr Ponsonby is having an affair with the chambermaid. All the women rally round to comfort Mrs Ponsonby and even put the kettle on. This delays their entry into the fray. 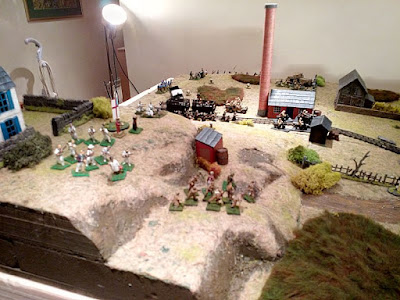 The motorbike scout section leads the way, with the Belford Cricket team 1st XI and the Coldstream Old Guard on the right. 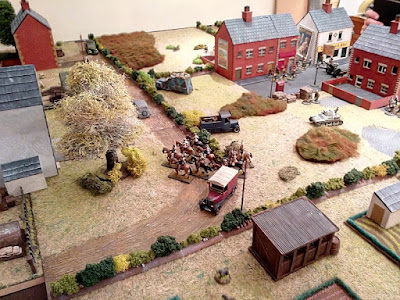 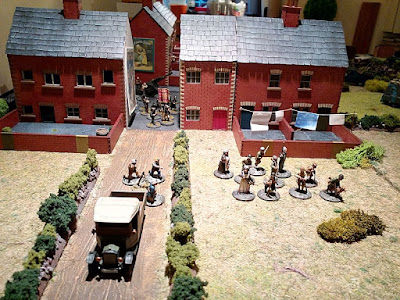 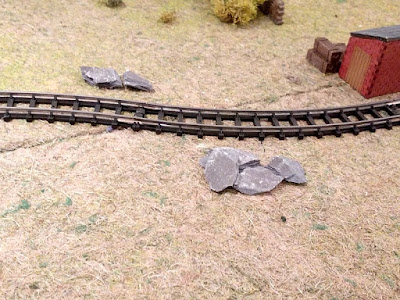 The 60lber fires and lands a massive shell into the centre of the motorbike scouts. They disappear in a cloud of red earth. Braddock drops to his knees and offers a prayer for their souls and then orders the Army forward. 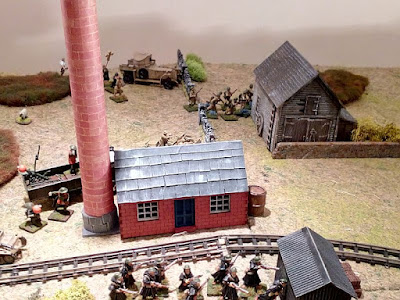 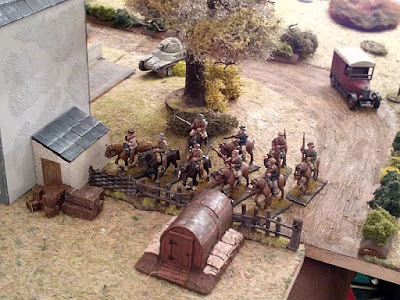 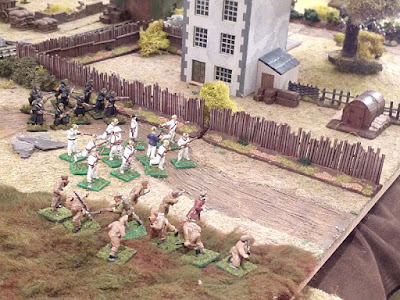 However the army advances in force with monks, cricketers and the Old Guard and quickly send the cavalry running 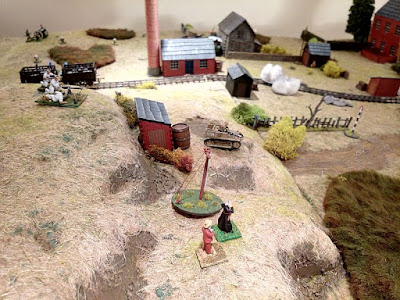 Braddock and your intrepid reporter advance under cover of machine guns. The machine guns are keeping the enemy pinned down allowing the army to advance 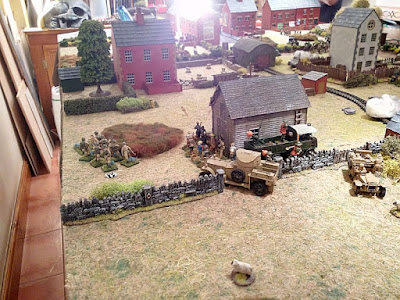 On the left the Army is advancing slowly. The light AT gun on the back of a truck has taken out the miners tank (top right). This valiant unit would also destroy the 2 remaining miners vehicles and deserve to be mentioned in despatches. 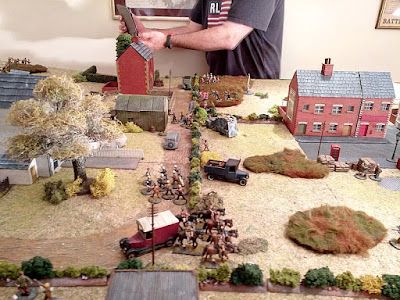 The miners have advanced to form a solid line of defence 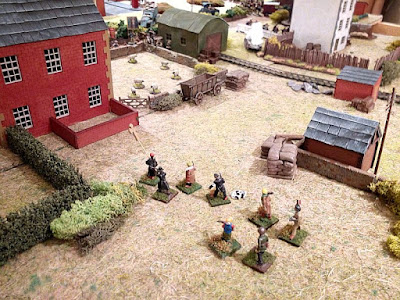 In a reckless charge the congregation attack the house on the left but are pinned down by fire from the right and from the house. 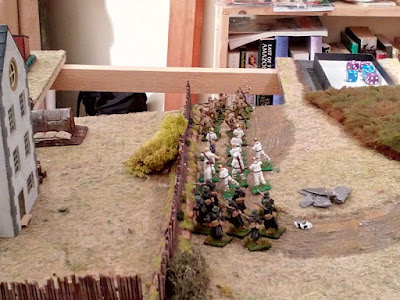 On the right the infantry are massed and the cricketers charge the occupied house and a vicious melee ensues. They are victorious but at great cost and the miners counterattack wiping out the cricketers. The monks attack and capture and hold the house. 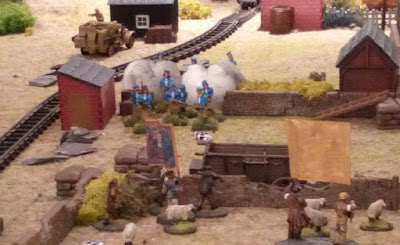 On the left smoke has obscured the miners in the field and although they are pinned by the Rolls Royce AC they are going to be tough to move. Through the smoke the WI advances unleashing a devastating volley on the miners, rendering them ineffective 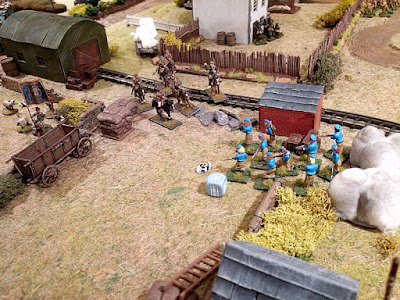 Seeing the WI attack the Cavalry decide to charge. The WI fire at the chargers and wipe them out. Even Mrs Ponsonby smiles. 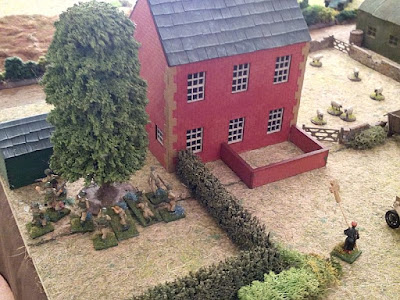 The middle Guard advance on the house and clears out the behind it and most of the militia within it, saving the congregation 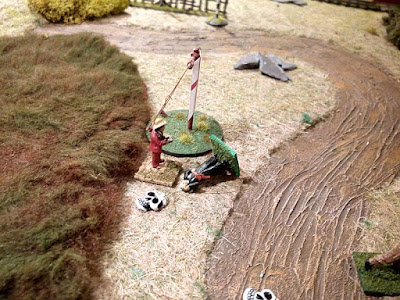 At the point of victory Braddock looks up to see a pigeon fly overhead and drop something. The bomb, for it was such, lands at his feet and kills him instantly, right in front of this reporter. 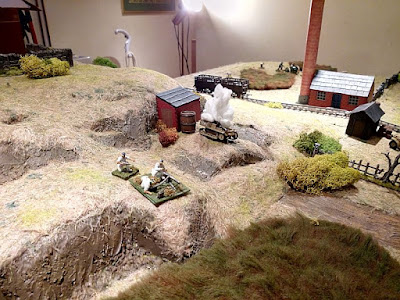 In the confusion one of the armoured cars brews up 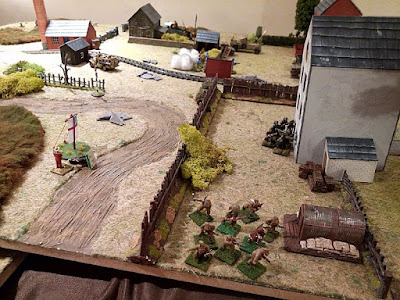 But it is too late for the miners and they have lost too many men. Whilst they technically still hold the ground it is now a mopping up operation.
It has been this reporters greatest honour to report on the valiant action at Alston and whilst the day was marred by the sad funeral procession of Archbishop Braddock one must not forget the brave actions of the Army, especially the terrifying charge of the WI, the true shooting of the AT gun and the sacrifice of the Belford 1st XI. The pitches of Northumberland will be poorer this summer .

I had a great day at Matt's and you can read the biased and barely literate report of the miners here. We are planning the 3rd battle shortly.