One of the first things I teach the students in the mining module is the difference between reserves and resources. Resources are all the model soldiers in the world and reserves are the one I can afford to buy and paint. In addition to this is the stock pile. Buy controlling the size of the stock pile you can manage the ups and downs of the market. We call it the Lead Mountain and I've been tinkering with mine.
Firstly I based them all up with weekend. To be honest most of them had a base all ready, I like them standing up waiting for me. However very few of the bases had a layer of filler applied to obscure the metal base of the figures. So I spent a few hours doing this each evening whilst watching seasons 1 and 2 of Peaky Blinders on Netflix. If you've not seen it I can strongly recommend it. 1920's gangsters in Birmingham (the one where they say "Awl Roight" and not "Y'all".)
Anyway back to the point. My Lead Mountain is big. So big I did a graph 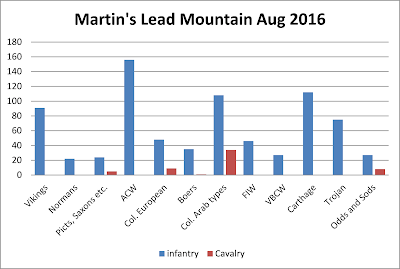 771 infantry and 57 cavalry. That does not include the ones in the bits box, nor the Dwarfs which need converting to stop them needing slotta bases (I hate slotta bases)  nor the still unmade Victrix Napoleonic Army I bought the other week nor the unpainted 10mm 1864 Prussian army that is a long way down the list. I have 8 full file boxes and it's the Border Reiver Show next weekend. I have space for more painted figures but not for unpainted ones, and the 2 must never meet.
On the upside I'd didn't spend that much on them, The ACW are 50% plastic and the rest bought from junk shops at about 20p each. Still at 70p average for infantry and £1.50 for cavalry (half are a prize from last years challenge) it's still a big investment of over £600
To alleviate some of the back log I've painted this brewery dray. It came with a 4 horse team but most drays have 2 shire horses. This one has 2 ordinary horses and I now have 2 horses to attach to a new cart once I've built it.
The cobbles are made of super sculpty, which I forgot shrinks a little so I had to recarve the holes for the horses, which was annoying.
I've left the brewery name off as I will also use it as a water wagon for colonial types. 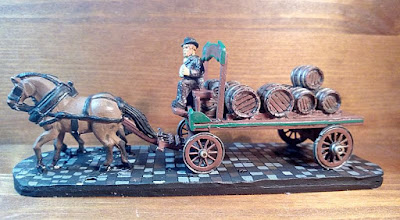 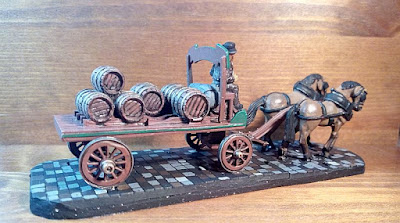 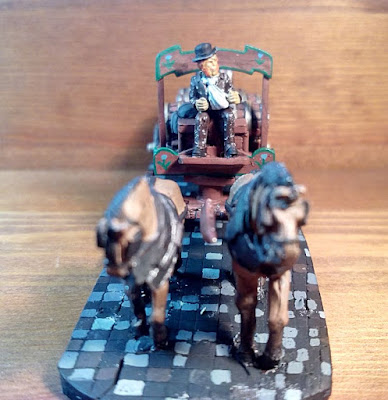 Right next is a video chat with Dave Docherty on the analogue challenge video chat room. Pop in and say hello