Today I was invited over to Matt Crump's dungeon for a VBCW battle. I had a fantastic day, Matt is a great host and the dungeon is pure gaming fantasy.
We fought a VBCW battle using Bolt Action rules, my first proper game with them and it was great fun. This is my version of the battle and hopefully Matt will publish his side of the battle.

"Captain, there is a large force of Scots trying to retreat back to Scotland over the river at Gilsland 1/2 a mile ahead".
Captain Smith looked at the scout and then round at his column. He had been tasked by Lord Percy to secure the road east of Carlisle and Gilsland was about 8 miles away, a little far but the opportunity to crush the Scots would please Lord Percy. "Gentlemen, there are Scots ahead and we shall have them this day. Advance"
The fascists arrived on the left and found the Scots split on either side of the bridge. Overhead each side had aerial support with the fascists having a machine gun armed biplane and the Scots one armed with 2lb bombs. I immediately swoop in a rake the biplane with lead but it passes harmlessly through the canvas. 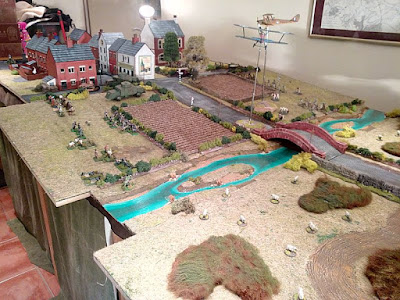 Smith positioned the main body of his force in the field next to the bridge where the Scots would wither under the  fire of his mortars as they tried to cross. 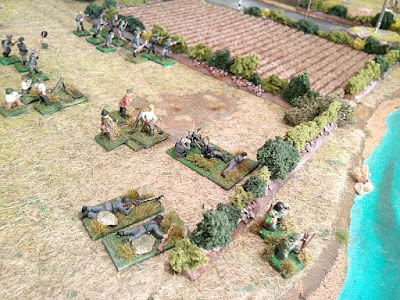 The crossroads was seized by 2 massive Bussing A5P armoured cars, each with 10 crew, and a light FT17 tank. Immediately facing them was the Scots AT gun and I immediately unleashed a volley of fire from my armoursed cars which sent glass flying but caused no real damage. The Scots immediately formed a barricade of trucks. 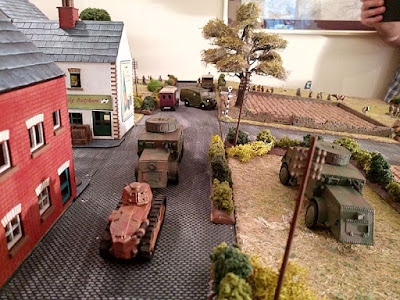 In the town my 3rd AC supported the Northumberland Rangers assault sections armed with SMGs and anti tank grenades. 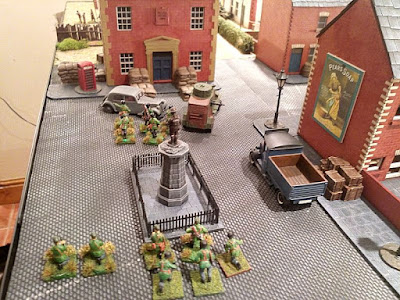 "Damn and blast". The trucks move and the AT gun brews up the front AC. The tank moves into the street out of shot of the AT gun. 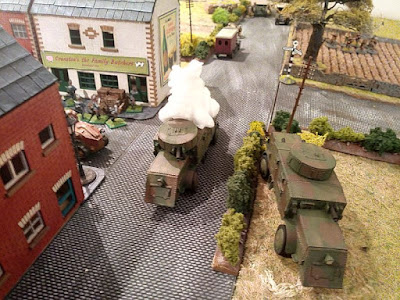 The Scots MMG armed Matilda rushes past my AC to strafe the infantry, only to be hit by the light tank and turning it into a burning wreck.  At this end a section of Rangers enters the Police station. 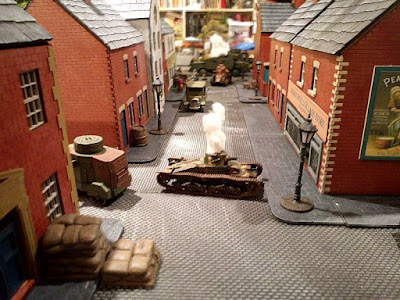 At the far end of the street at section of BUF enter the butchers shop and are immediately pinned by fire from the Scots on the other side of the shop. 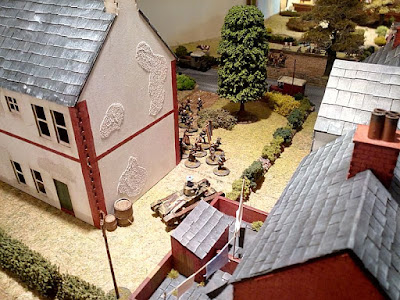 The Rangers in the Police station come under fire from some Scottish Militia but a deadly response cuts them down. 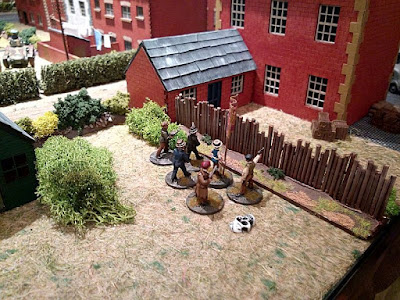 In the centre the fascists have taken up their positions and are starting to chip away at the Scottish infantry. The mortars are beginning their bombardment but have yet to find their range. 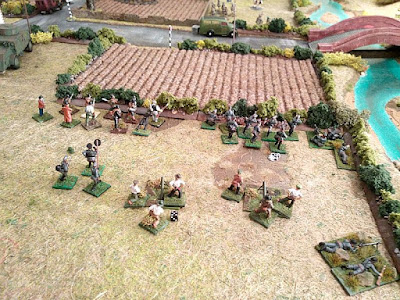 The Scots across the river are starting a flanking movement but I've get it covered with a Vickers MMG and a Boyes ATR. 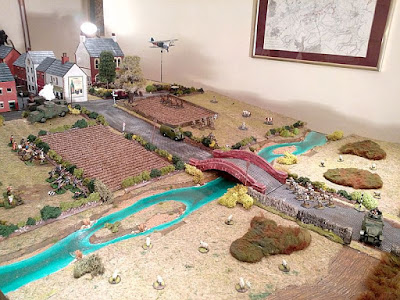 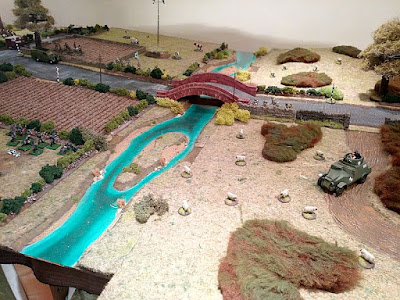 Back in hte village the Scots have occupied the white building in the centre but my AC is making them keep their heads down. The unit in the butchers shop is coming under relentless fire from the Scots and the pins are racking up, they now have 5 pins and are struggling to rally. 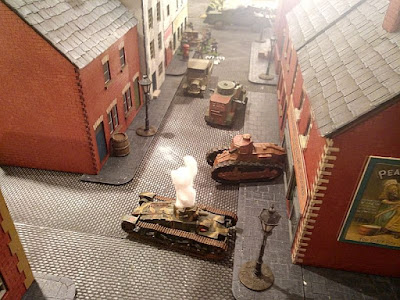 The Scots matilda have moved the crossroads and my stupid tank  has driven to the wrong end of the High Street. I have given up the most important position but I have a Ranger assault section who are ready to assault the matilda. However is is unsuccessful and in the aftermath the Rangers are wiped out. 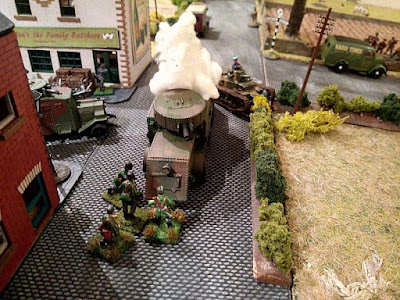 As the Rangers in the police station have wiped out the militia facing them they advance down the High Street but the Scots advance out of the house and destroy the Rangers section. 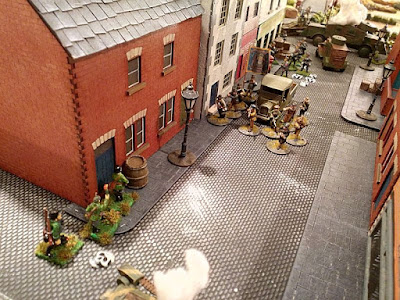 My tank is now isolated and surrounded by infantry. Luckily Matt adds a extra white dice into the bag for random events. It is drawn and I have intercepted an order. I can now command a unit of Scots to move where I want. The Scots on the high street are ordered to march down the high street towards the armoured car where they are promptly mown down. I need to get my tank back into the game 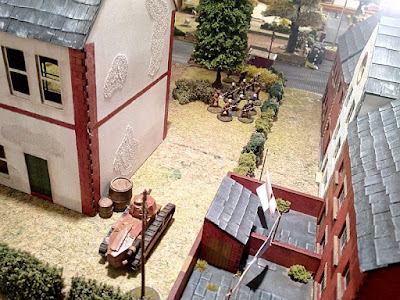 The Scots continue to probe towards my main position and I continue to whittle them down. I'm becoming concerned with my mortars who can hit anything but they do hit the matilda and cause 6 hits, all of which do no damage. Worse still the ATR is having no impact at all on the Scots AC. I am getting flanked. I move the AC from the crossroads and fire on the Scots advancing from the far side of the river. Firing on infantry is the forte of my AC. They can put down a devastating weight of fire. 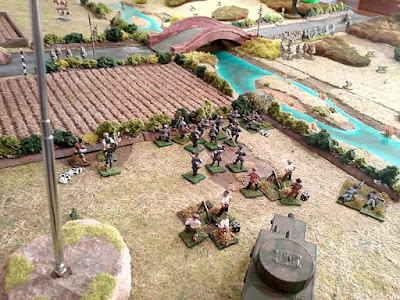 Overhead the Scots biplane circles and drops a bomb which blows up the AC. This is starting to look bad. I'm being attacked on 3 sides and the troops that can rescue me are no where. The BUF in the butchers shop now have 7 pins andcan only activate on a roll of 2 on 2D6 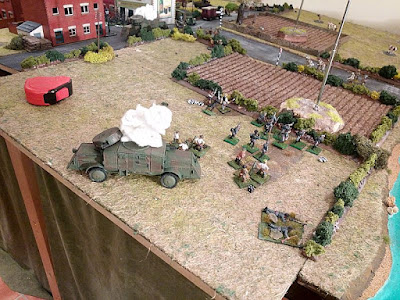 The Scots ACs on both sides of the rivers are doing real damage. 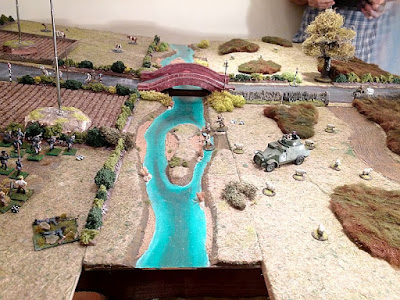 Mean while on the other side of town my tank is assaulted by Scots miners. They can do no real damage but I'm stuck 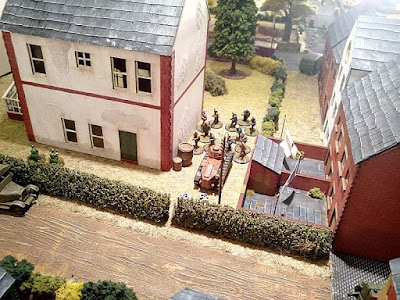 My BUF stronghold is neither strong not being held. It's time to retreat off the field with the remains of my force watch the remaining Scots cross the river. 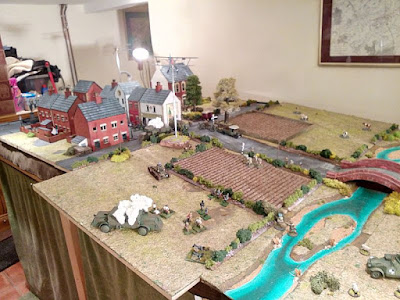 Captain Smith watches as the town is cleared of Scots. He surveys the remains of his force. It is time to send for the engineers to fortify Gilsland. a couple of miles away is Spadeadam airfield. The 2 main roads across country are nearby. Gilsland will do as a stronghold. Will his Lordship be pleased though.
I messed this up in the following ways
1. I was obsessed with the single Scots AT gun, It left the field across the river at the end of the battle.
2. I gave up the crossroads and ended up splitting my force in 2
3. My tank went walkabout at the crucial time
4. Mortars is rubbish, but are much better that ATRs

I had a brilliant day and would have published this sooner but my computer decided to update and I lost the 1st draft.
Hopefully I will get to go back to the dungeon soon. in the mean time it's the Border Reiver show on 3rd Sept and I need proper artillery and AT guns.
Depending on the weather tomorrow I may fight the 2nd battle of Belford or do gardening, hope it rains