I downloaded my copy of Dragon Rampant yesterday and played it today - yes I have done no painting today.
My first impressions of the rules were very promising. It is easy to pick up and the text is very funny. I have Lion Rampant but have yet to play it.
I picked out two 35 point warbands and have bound to have made some errors. As usual the light in my gaming room is shocking so excuse the dodgy photos.

Forest Dwellers lead by Saffron (her stripper name} who is charmed 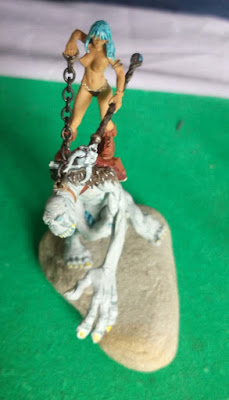 Next up 2 units of  Scouts 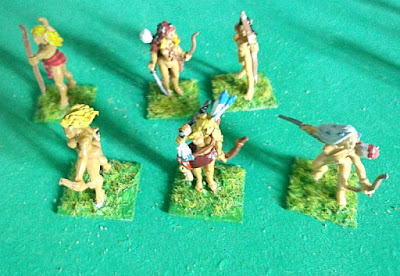 And a unit of Satyr Scouts 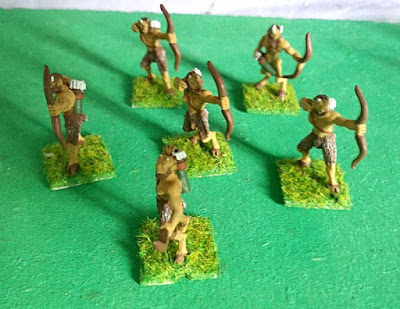 Infantry was 2 units of Light Foot, one with offensive option 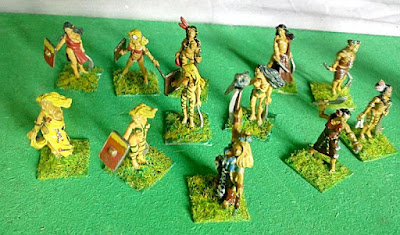 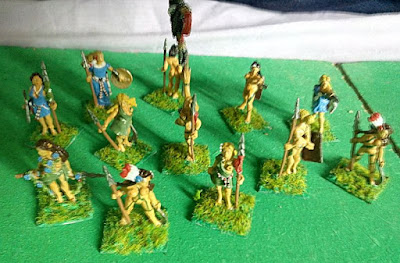 A unit of Elite Foot 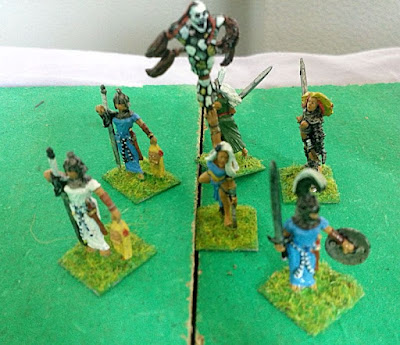 A unit of Belicose foot 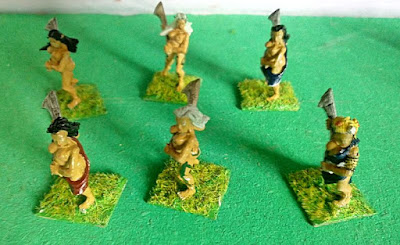 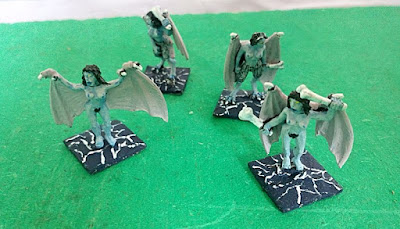 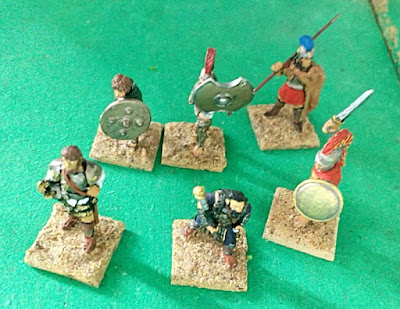 They had 2 units of Heavy Foot 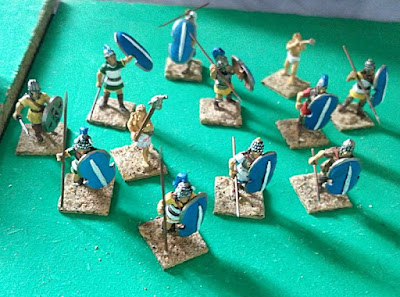 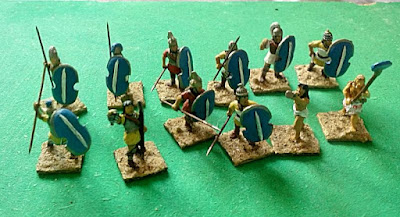 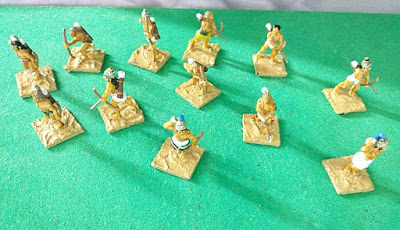 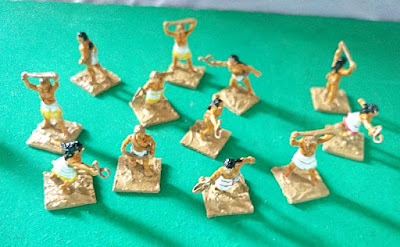 A unit of Chariots, elite riders 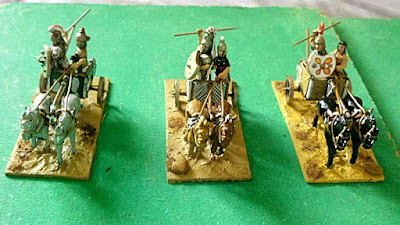 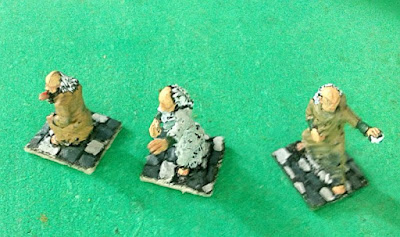 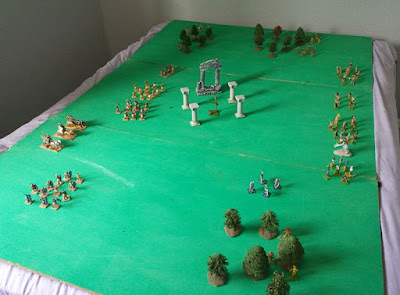 The Forest Dwellers started first and the action began on their left wing with one unit of Scouts defending a wood against a unit of Greek Heavy foot. 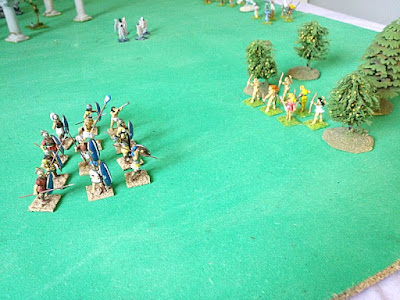 The Greeks attached, the Scouts evaded and removed 2 strength points causing the Greeks to retreat. 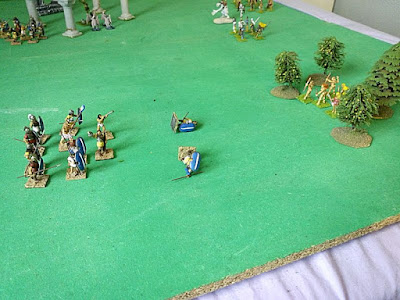 In the centre the Harpies attacked the 2nd Greek Heavy Foot but were pushed back. If the battle is a draw the attackers are forced to retreat (which is fine) but I think they become battered (which will be a problem later) 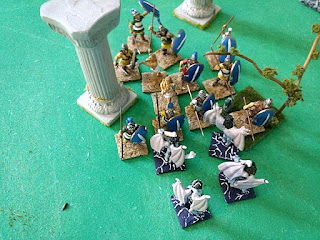 The Greeks formed a Wall of Spears as Saffron advanced 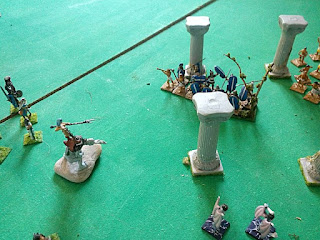 There were lots of very short turns at the start of the battle as I kept failing activation. It is important to plan your turn properly, which is good.
The battle was starting to focus on the centre as the forces struggled for control of the temple 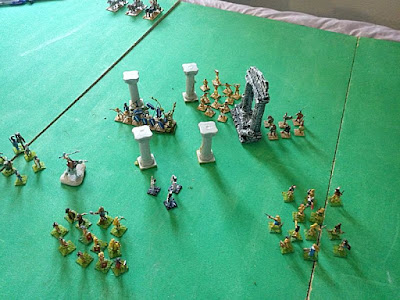 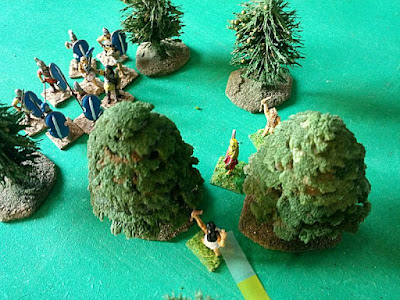 On the right it was a shoot out between the Witches and Archers and Scouts and Satyrs. The Archers and Witches got the upper hand due to failed activation roles by the forest dwellers 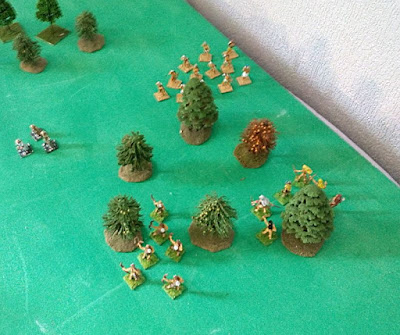 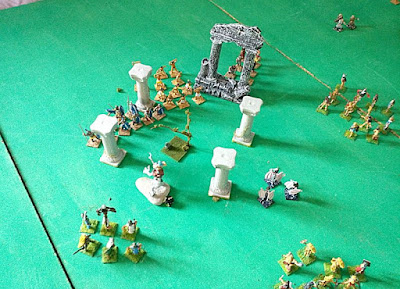 The Witches were having a great time casting spells on a unit of Light Foot, keeping them out of contact 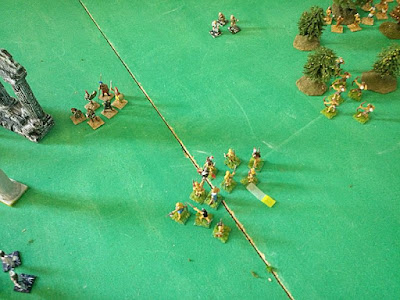 Up till now the rules were great, simple, taxing and pretty realistic. The armour rating was particularly effective. However I now have a problem with the rules. If a combat is drawn then the attackers retreat (fine) but as I read the rules they become battered.
The now battered chariots (even though they passed their courage test) were immediately attacked by the Elite Foot and stomped on. However they then passed their courage test and even though they only had 1 strength point left the Elite Foot with 4 strength points had to retreat and were Battered. They were then attacked by some heavy foot and beaten up. Again the elite foot passed their courage test and the heavy foot retreated and were battered. 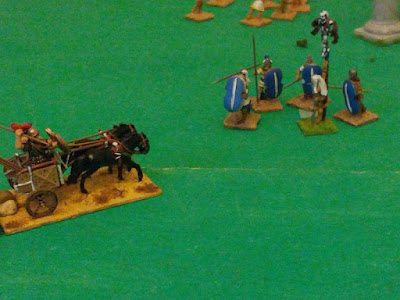 This all seems wrong. I don't mind that the attackers retreat but I do mind that they become battered even though they passed their courage test. In the future if they pass their test the retreating unit will not be battered.
Meanwhile Saffron had wandered to the Magic Faraway Tree and won the battle.
Overall the rules are great and work very well and unless anyone has a better suggestion I will not batter retreating attackers who pass their courage test.
Dragon Rampant is now my go to set of Fantasy rules, in fact all large scale battles pre gun powder