The rules wot I wrote

So today I cracked open the ACW armies I painted during the Analogue Hobbies challenge last winter. Can't believe that I hadn't done so before. I had been looking at rules for a while but couldn't really settle on a set I liked. I like chance to move the troops around. I like regiment level tactics, battles that are more attritional and not those that end all of a sudden, IGYG turns and I like lots of dice - Warhammer does that to a man.
So I decided to write my own. I start with a very simple set of rules and then play test them to make them work.
Today was the 1st play test so armed with some very simple terrain, a page of rules and a note book I set my self to a couple a days of very casual play whilst watching the rugby and listening out for the Port Vale score.
Set up 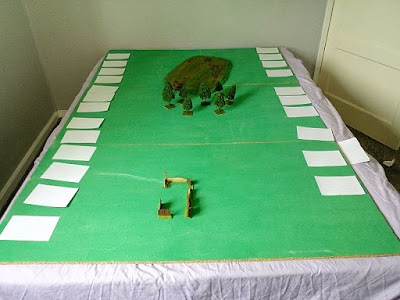 Set up is using blinds with 50% blanks. Blanks can be moved at infantry column speed.Once blanks have moved then all unmoved cards are turned over and the units placed. That ends the turn. The plan was for the confederates on the left to take the hill at the top whilst the Union side were planning a wait and see. With this in mind the Union side left 4 unseen unit cards off the table to bring on later as reinforcements.
1st turn  saw confederates advance towards the hill and Union towards the wall. 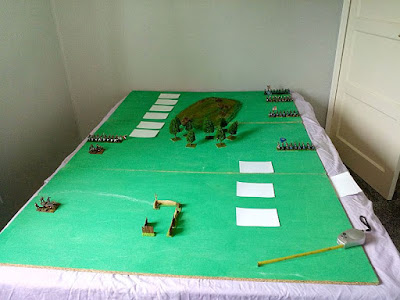 4 units of Union figures deployed whilst the Confederate right is very bare with only 2 cannon and a veteran Zouave regiment in centre. There will be a lot of rebel infantry on that hill. plan seems to be working
Turn 2 and the rebels advanced as 3 blinds onto the hill  with Cavalry on the flank and 2 regiments by the woods,while the Union uncovered 2 more infantry and a cavalry unit. No photo but looking very promising for the rebs, a definite numerical advantage which is a factor in morale in my rules. If they can not get overrun on right then should be able to sweep around the Union and roll them up.
Turn 3 and Union moves first and gets very close to the rebel blinds, can't fire as on wrong side of the hill. Confederate turn reveals 3 regiments in column on the hill (all blinds reveal as marching column) and pretty hopeless in battle. They are too close to the Union infantry and need to get the first more next turn 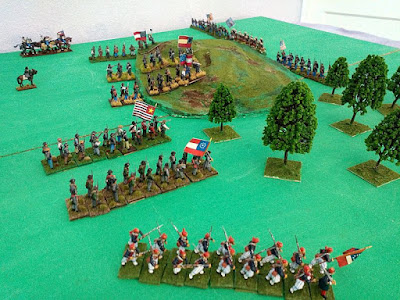 Union gets 1st move and advances on the Rebels in column. Only 3 casualties inflicted but the columns now have to redeploy under fire and 2 of the regiments fail to do so and are disordered. What would you do if you were less than 1/2 charge distance from a very messy line. Yip charge bt that is for next turn 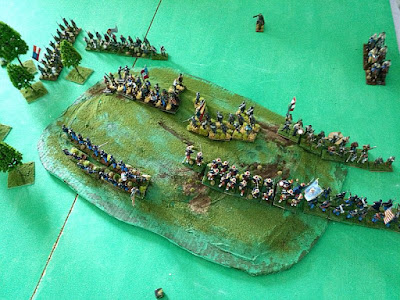 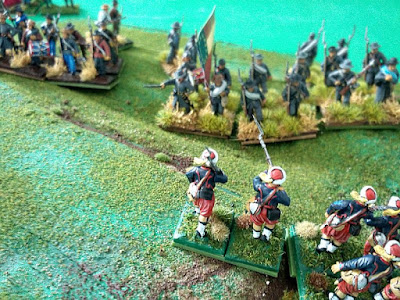 Turn 5 and the Union wins the initiative roll again and elects to charge the rebs. I'm no Hannibal but that was obvious. All 3 Union regiments pass their morale test for charging and all 3 rebel units fails theirs and route taking a random unit to the right with them. Union follows up, should the hill have been rough terrain or just a gentle rise 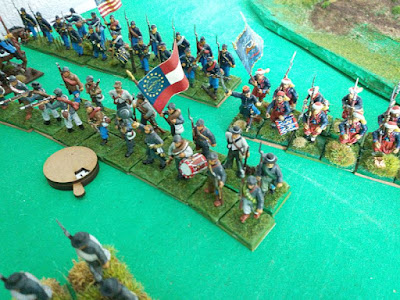 The rebel phase shows 2 units failing to rally,is is  although one needed a reroll from the general and leave the field whilst the other 2 recover but are disordered and are about to be annihilated.
What did I learn, advancing blanks is good,advancing blanks too far is dumb ass. The cannons worked well but need to remove the save. The firing was fine, 3 stages - Fire each eligible figure with 1 being a misfire, hit - 5 or 6 with range modifier and save -6 with cover modifiers.
Overall very promising but ended very very quickly and only took 2 hours from blank table to end. Will tinker and play again tomorrow.
Also there is a 1/2 price army sale at Dixon and I'm very tempted
This is the only Civil War song I know and the original is no longer acceptable as the singer is a nonce