In my last blog I posted a couple of Pict houses from Scheltrum I purchased at the Border Reiver. 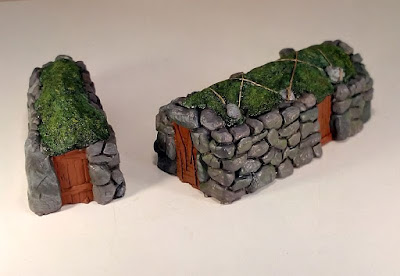 These are cheap and well made but I thought I could make some of my own; so here we go, my 1st how to tutorial.
I made the huts from normal polystyrene packing material that i cut to shape and size using a heated polystyrene cutter.These are cheap on ebay, mine was about £10 and it's a proper piece of tat but it works. It is important to use a cutter for 2 reasons. Firstly it makes much less mess than a knife. The second and most important reason is that it gives a smooth surface to work with that doesn't fall apart. 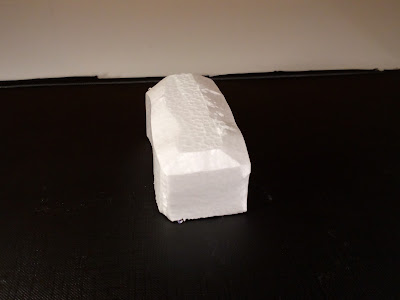 The next step is to draw on the bricks, the classical techniques of using a biro works best as it gives indentations in the polystyrene. If you have used a heated cutter then it's like writing on the sole of a slipper with a biro. 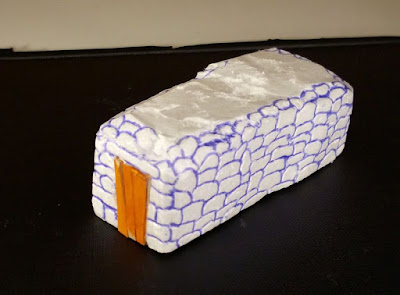 I cut a door into one end and added a poorly made door made with a lollipop stick.
Finally the paint job. The boulders are different shades of grey, chose a much darker of lighter shade for a few to make it standout. The spaces between the boulders was painted in black. The doors are Vallejo Mahogany Brown, my favourite and the brownest brown, undercoated in burnt umber, my favourite dirty colour.
The turf roof is a dark camo green with a dry brushing of lighter camo green and yellow. This didn't really work well so I gave them a light coating of flock to simulate the turf.

The central house has a missing boulder. One thing I've picked up about these houses is that they are rubbish places to live, crap doors, gaps in the walls and worst of all no chimney. I've been to Scotland and its cold and damp and that's the summer.
This is the most appropriate song about writing on the sole of your slipper with a biro on a Saturday night instead of going to the pub

Email ThisBlogThis!Share to TwitterShare to FacebookShare to Pinterest
Labels: How to, Pict, Scheltrum Miniatures