Attack of the Unsinkable Rubber Ducks

Bank holiday in UK today and my travel plans were cancelled. Typically the weather is shocking and so I fought a battle between pirates and Brits to test out my newly painted boats and a Warbases palisade fort I purchased at the Border Reiver event last year. The battle is nominally set on the American mainland around 1690 with the pirates landing on a beach and capturing a fort held by the British.
I was trying out my colonial rules adapted for pirate battles and for the first time special weapons cards that can only be used once. The Pirates, under Captain Pope, were 2 boat loads of musket armed troops and 1 of assault troops with pistols and swords, ladders and 2 special weapons,a volley gun (6 shots from 1 man but no reload) and a hand held deck gun to take out the gate (again no reload). I use pistols in melee combat as an extra attack (no reload) or fired mid charge to mess up the defenders.
The Brits also have special weapons in the form of 4 grenade cards that can only be used by the grenadiers, if they are killed the grenades are lost. The British have a volley fire rule where they roll for reload against the officers stats. A volley causes an automatic pin on the target unit but give the targets a +1 save.
The battle begins with the 3 pirate launches, Maisy, Jenny and Bessie from top to bottom, appearing on the beach observed by the British beach patrol under Ensign Watkins. 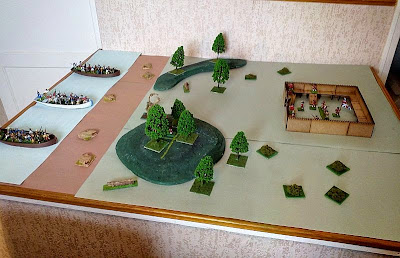 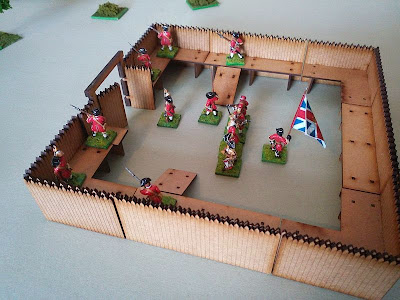 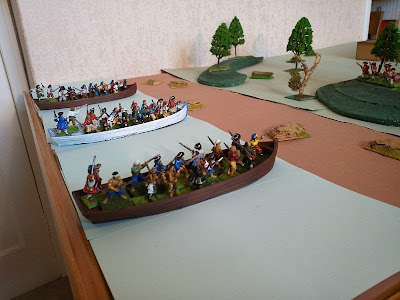 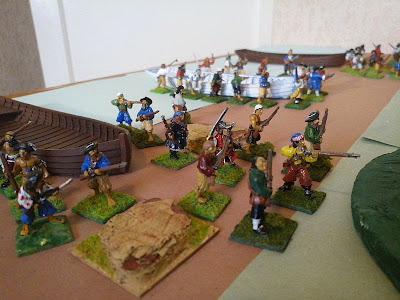 The pirates came ashore somewhat clumsily and faced a couple of ineffective volleys from Watkins patrol. 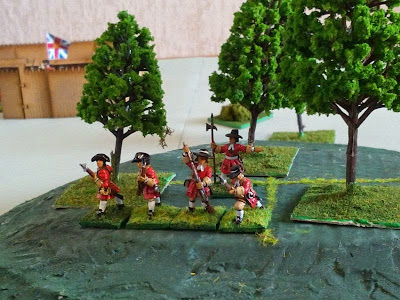 Ensign Watkins patrol
The patrol then legged it back to the safety of the fort, losing a man at the gates, leaving the pirates to advance. 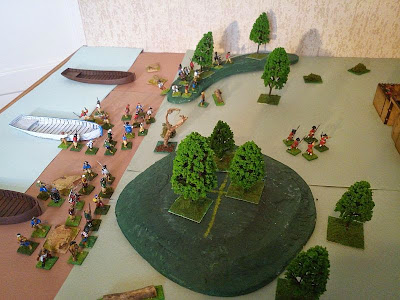 Race for the fort

Under covering fire from the crews of the Bessie and the Maisy the crew of the Jenny assaulted the walls. Boaz Shufflebottom advanced with his deck gun, fired at the gate and hit the wall causing no damage. The grenadiers on the wall lobbed grenades and killed 4 pirates including their leader, Bosun Israel Hands. This was a shattering blow and they needed a 10 on a D10 not to rout. 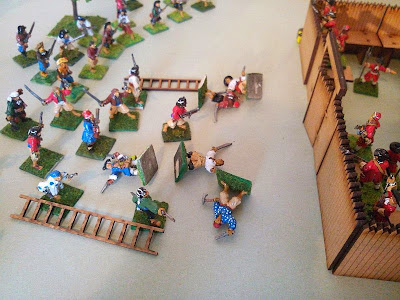 Which they achieved and supported by a devastating volley from the crew of the Maisy who killed 3 defenders including both grenadiers pressed home up the ladders. Mad Jack Calico made it to the to but drew his duel. The pirate on the other ladder was killed and the crew of the Jenny routed. I decided that Mad Jack was lost in the battle and if he passed a separate leadership test he would carry on.. 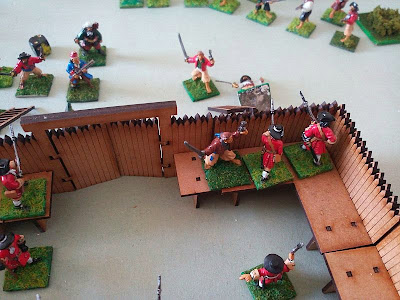 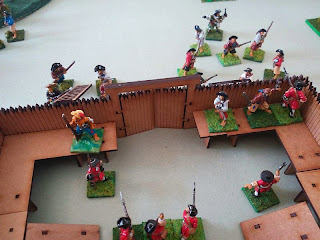 The Brits weren't finished and a series deadly volleys kept the ramparts clear. Ensigns Watkins and Williams charged the remaining pirates on the ramparts, killing them and routing the crew of the Maisy.
Captain Pope, having lost half his men decided the the fort could not be taken withdrew to the boats.
Thoughts were that it worked well but needed some tweaks to grenade rules. All the pirates are Foundry and were my first major purchase on return to the hobby. The Brits are from Dixons. Both forces are great sculptures and a joy to paint. The boats also looked great.
For those of you who are following the building of the Battle of Chunuk Bair diorama in New Zealand have look at this photo essay.  http://anzacdiorama.blogspot.co.nz/2015/05/first-pics-of-massive-gallipoli-diorama.html I would like to congratulate all involved it looks truley amazing. This seems an appropriate song to end on https://www.youtube.com/watch?v=cZqN1glz4JY