In the Kingdom of the Blind

Having a BBQ this afternoon so being an English summer I've hunted out my scarf and overcoat. Prep finished early so had a quick skirmish on my new mine terrain board. As suggested by Roy at RoyW's Hobby Blog it was a VBCW fight between the miners of Dinnington who occupied the mine and the BUF who had been sent to clear them out. 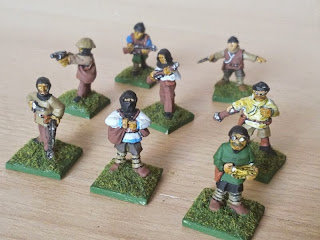 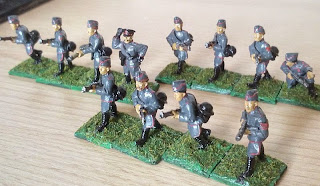 The miners locations were generated randomly using cards and the BUF would activate them when they came into view, at which point the miners would get 1st go. BUF had 3 smoke bombs and miners 3 grenades - let's not even think about gunfire and grenades in a coal mine.
The BUF fired a burst from a Lewis gun down the tunnel to pin any potential miners and chucked a smoke bomb down the tunnel as cover. They advanced to the first set of doors.
The rules which I made up on 10 minutes before the game enabled figures to look round corners and if pistol armed to fire round corners. Visibility was 6".and the lead BUF took a sneaky peak into both rooms. The south room was deserted and the northern room only contained the hapless Bert. 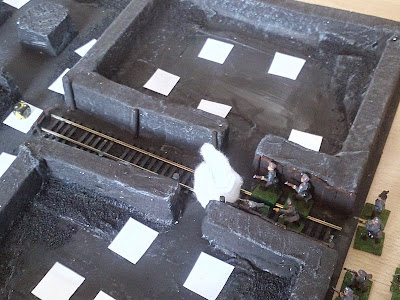 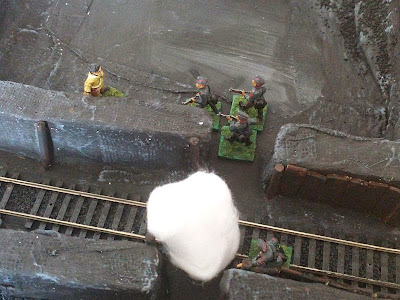 Bert is cornered
3 BUF advance on Bert and demand he surrenders, which he does. Leaving Bert under the guard of a trooper the rest of the BUF advance down the tunnel past the now dissipated smoke and reveal Bruce and Bill who opened fire and missed. The corporal of the BUF, Sid, opened fire with his SMG and killed Bill.
Under the cover of Sid the BUF continues to advance. Sid kills Bruce in the next turn and the BUF tentatively enters the main hall revealing Boris and Basil. 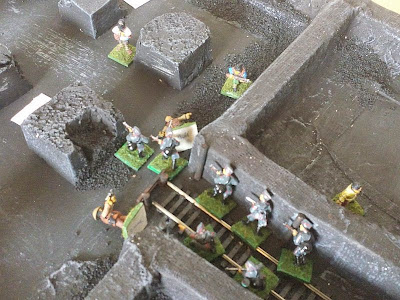 Boris throws a grenade to no effect apart from stunning the 2 lead BUF troopers. Basil opens fire and misses.
Boris throws another grenade and both BUF troopers save and Basil hits but another save. Third attempt bu Boris and he takes out one BUF but Basil misses again, something about cows arses and banjos seems appropriate.
Sid reaches the end of the tunnel and dispatches Basil. All dead miners are down to Sid and based on previous fights his days must be numbered.
The BUF burst into the hall and reveal Brian, Bart and Bob all of whom take aim and get 1 hit on Sid who saves. Sid takes out Basil. The following BUF troopers take out Bob and Brian. Boris is hit but saves and surrenders. 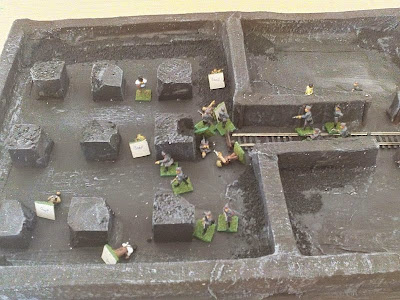 This was a fun 30 minutes and the BUF won because they had sensational roles and the miners were bleeding awful.