A Tale Etched in Blood and Hard Black Pencil

After a typical English BBQ on Sunday, vast amounts of Strongbow Cider and Red Wine, many unopened bags of salad and a fridge full of unused meat I decided to fight a large scale VBCW battle. Never fought one before and got out all my figures and armoured cars. I stretched out by table size to 8' by 4' (its the spare bed with boards on it and piles of books to act as extra legs. I was using my own I go You go rules with unit activation each turn and a roll to see who starts the turn
The battle was for control of the village of Dinnington, a key crossroads between the Fascists / Royalists and the Socialst mines. The Dinnington villagers had blocked the roads and the Fascists plan was to capture the village. Reinforcements would arrive at random (ish) with Socialists from the left and Fascists from the right and top.
The sides 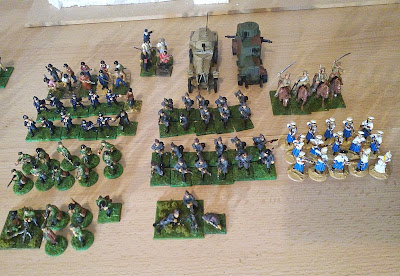 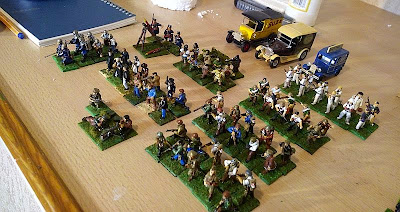 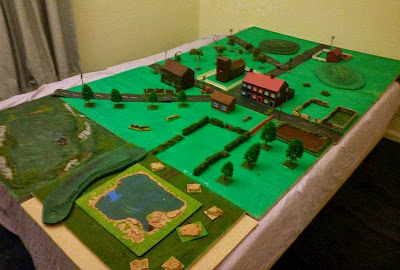 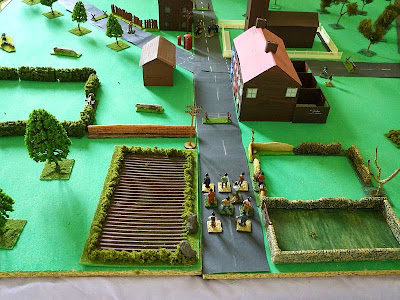 Fascists enter and kill the 2 guards manning the roadblock 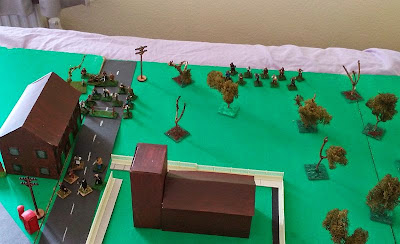 Miners enter and advance into the village .
Miners Vickers HMG takes position on the road to cover the crossroads.
There is stalemate in the centre as all units take cover out of range of eachother 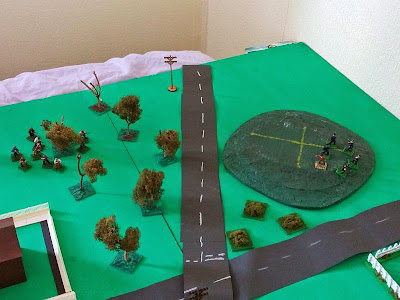 The police had arrived and taken a hill on the flank. Miners advance to kick them off.
Cross on hill indicates where slopes are and who can fire 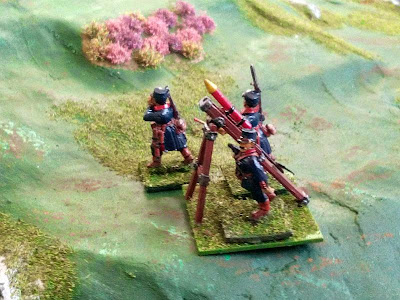 The Post Office Rocket crew arrived to support the Socialists.
Love this unit, a mix of Citadel Japanese rocket and 1870's Hungarian Infantry
36" range, longest on field with D10 variation in impact point. 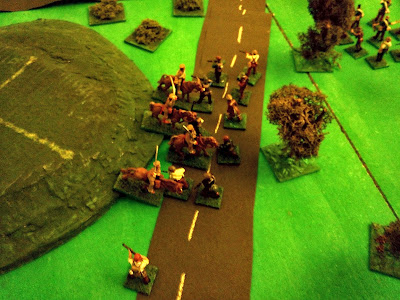 As the miners advance on police on hill the slightly deranged Northumberland
Yeomanry appear and charge over the hill catching the advancing miners
in the open. 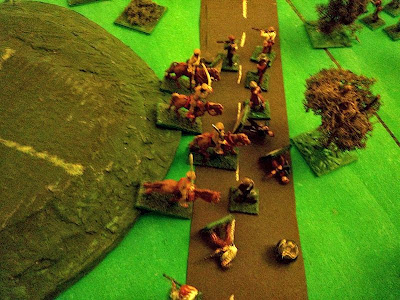 The melee was brief and brutal with 4 dead miners. The miners routed
off the table.
The 2nd squad of miners in the woods turned and fired on
the Yeomanry and routed them off the field 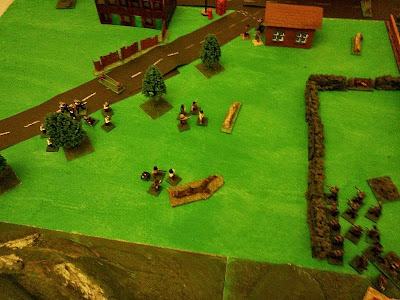 On the other flank the Border Reivers, desperadoes with dubious morals,
charged the BUF at the hedge. The BUF were under inaccurate fire form the Rocket
but were having terrible activation rolls, despite getting re-rolls from the standard. The
Reivers grenadier, who only had one grenade threw it during the charge and overshot
luckily taking out their squad leader. 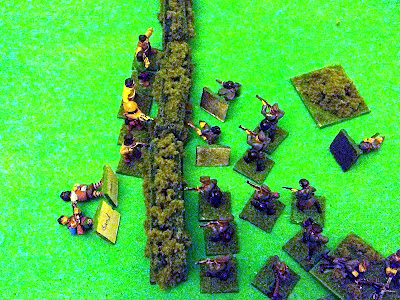 The battle was brutal and after 2 rounds the BUF retreated and exposed the Reivers
to fire from their HMG.
The rocket only killed 2 men in the whole battle, the BUF HMG crew this turn, saving the Reivers. 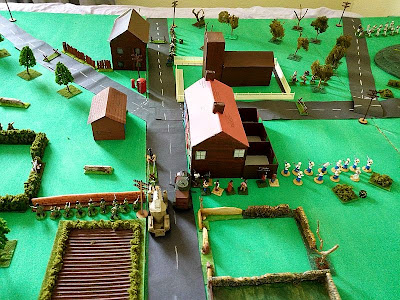 The 2 Fascist armoured cars arrive, the road block is removed and they
take out the miners HMG at the other end of the road.
The crew of the Valkyrie fire on the miners in the church grounds and cause them to
rout of the table. The centre is now clear except for the pistol and shotgun armed
Dinnington Militia. 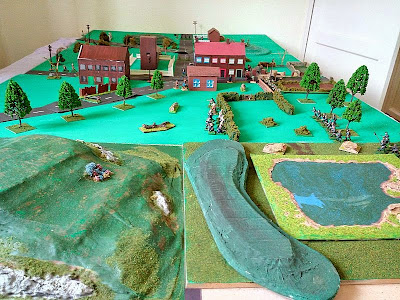 On the left the Socialist, despite winning all the fights are out gunned 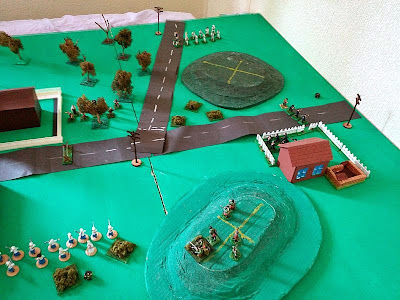 On the right the presence of the Northumberland Rangers HMG on the hill gives the
Fascists the flank.

The socialists are out numbered and outgunned and retire the field.
This was a a really good battle and took me 16 turns and  a couple of days to fight, to time limit when you solo game. The rules work well, need a run option, and the socialists are out gunned. Need more HMGs and rifles.
Off to eat some left over meat, heard this on the radio yesterday for the 1st time in years Take the Skinheads Bowling.
And finally I've just finished reading the The Strangler Vine by M J Carter, a cracking adventure book set in 1830's India, very much in the style of Bernard Cornwell.