It's been a month since my last post and I've not really been in the mood to post. I have, however done loads of stuff. I played a couple of games, another 7YW epic with Matt and a Bolt Action cold war gone hot battle of my US armoured infantry platoon vs Ian's Russians.

The 7YW battle was great, we are getting better at the rules and controlling our vast armies. This was the battle of Koln and once again I was the Austrians. 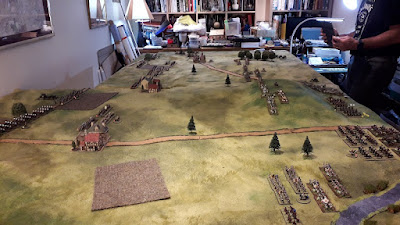 This picture is jsut a teaser and Matt's full write up can be found here. As you can tell still not really in the mood for writing.

The 2nd battle against Ian was fun. THe main issue with Bolt action is tat tanks are very hard to kill, generally you need 3 consecutive 5+ rolls to take out a tank. In the 1st battle, sorry no pictures, I killed both his T34s in the 1st turn! So we set up again and once more the tanks died easily but this one was closer, another victory for me.

The painting challenge is approaching and I have been restocking the lead pile. This challenge will focus on Sci fi and fantasy for a change. With that in mind I have started collecting and painting a Lizardman army using 3-D printed resin figures from Sundered Studios., the figures are exceptionally good. I've made a start 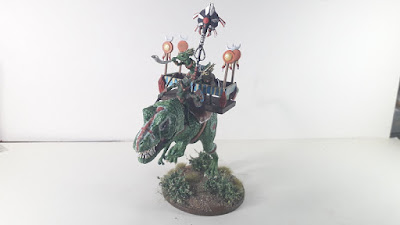 Albertosaurus with howdah. The dinosaur is from the Honourable Lead Boiler Suit Company and is great. It's a big unit, although not strickly in the force list for KoW or Warhammer, but then again I don't care. 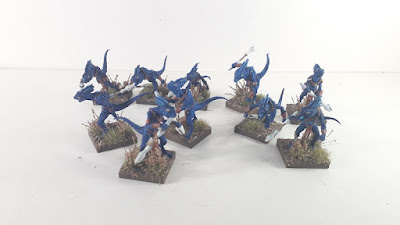 Unit of Skink blowpipers. I bought the figures in 32mm scale to give them a bit of size and these are same size as 28mm humans. Painted these in blue, obviously and they were a joy I've got some Stellar Warriors and they are massive. 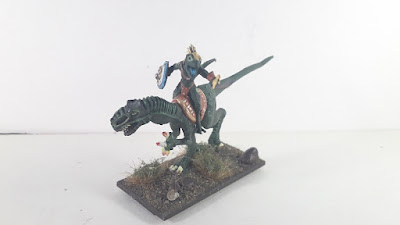 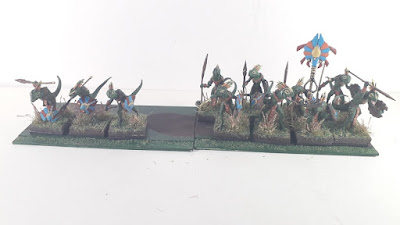 Unit and a third of skink javelins, again a joy to paint. These are based on my magnetic sabot bases for KoW.
The army is about 1/3 it's final size and I will buy some Wargames Atlantic to see how they compare.
Finally it's been a sad couple of weeks with the untimely death of Scotty. His funeral was last week and he was buried in his 1879 British army officiers uniform, always appropriate for a man who got married at Whitby Goth weekend.
Dave has been tasked with sorting out his collection for Julie, his wife, and zoom chat with Dave are punctuated with exclamations from Dave of "Fucking Hell Scotty" as he opens another box of horded toys. I have bought some from him and will paint up some 28mm Pirate ships for the challenge.
Keep well and I will write again in about a month!

Email ThisBlogThis!Share to TwitterShare to FacebookShare to Pinterest
Labels: lizardmen