Yesterday me and Matt finally got our diaries together and I drove over to Penrith for a day's gaming in the dungeon. I was spectacularly hungover but looking forward to an epic day. Matt always puts on a brilliant game and this one used most of our combined ACW forces to refight the battle of Oak Ridge on the 1st day of Gettysburg. I was about as epic as battles get. 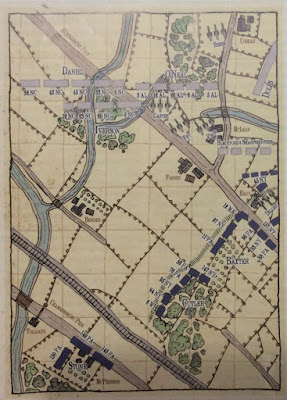 The Union were to the South and East defending Oak Ridge and the smelly rebel scum were to the North. I was the Union by the simple fact that I was too short to reach the middle and move the Rebels. The battle was a Black Powder scenario so for the 1st time we had different sized units. We used our Bolt Action mash up and therefore small units were very fragile. Once a brigade was below 1/2 actual strength it had to roll at the start of the turn and pass a morale test or the whole brigade legged it. 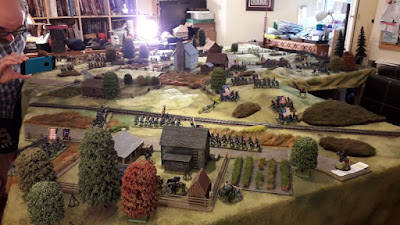 The battlefield from the South, told you it was going to be epic 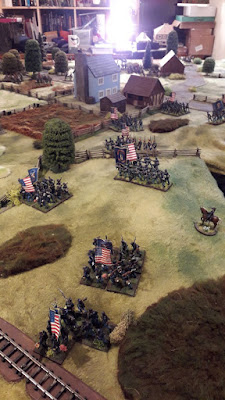 My centre, couple of brigades 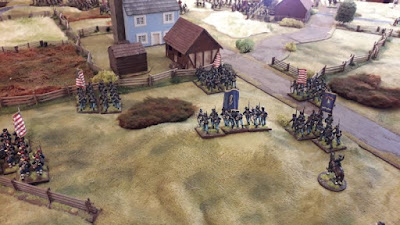 Bit more of my centre 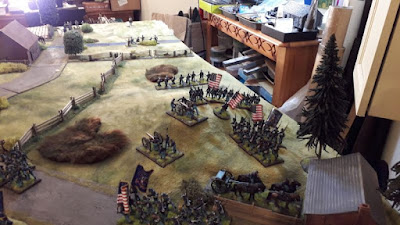 My right flank. Only 1 brigade and very exposed as they are closest to the rebels 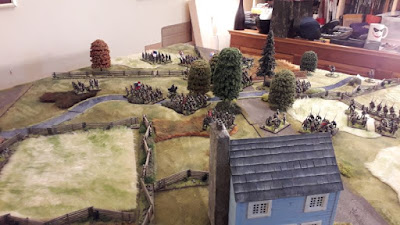 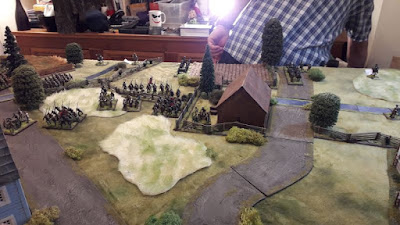 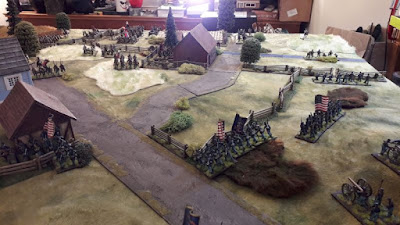 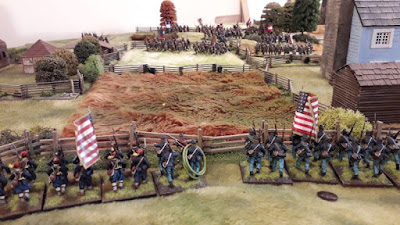 This looks very scary. My line is already taking damage and there are 2 brigades coming right at me 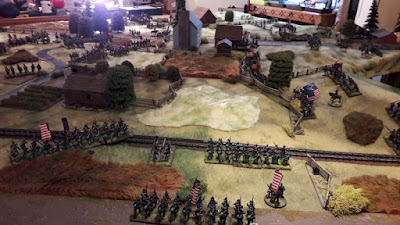 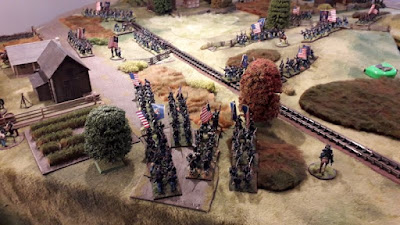 My reinforcements arrive at the south and start to dash forward. I have to roll up Matt's flank before he smashes my right. Only an entire division to kill 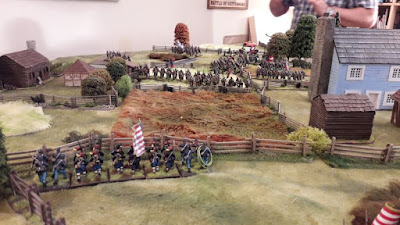 Back in the centre getting hairy 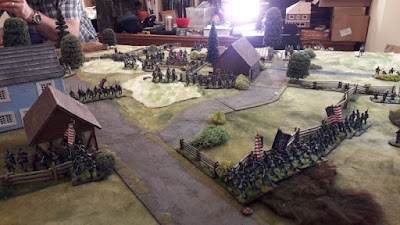 One of Matt's reinforcing brigades arrives 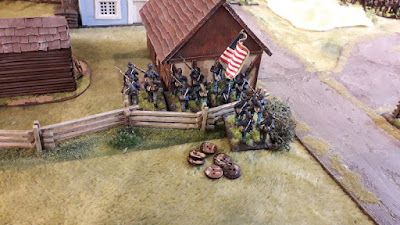 We use a random event dice and the unit I have occupying a farm find a stash of bourbon and take 6 pins. i'm never getting these back into action again 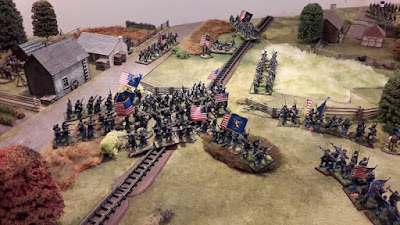 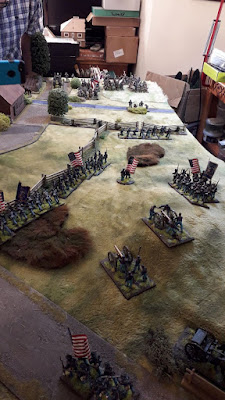 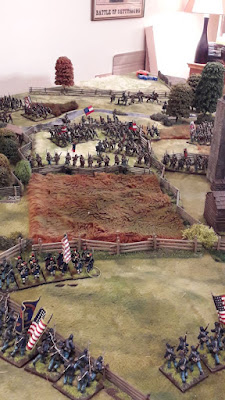 Still they come in in the centre. I can't move to reinforce my flank without getting cut in half 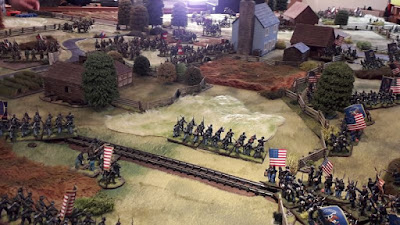 Getting to to position to the South. I'm going to have him in a cross fire. Get him marmalized 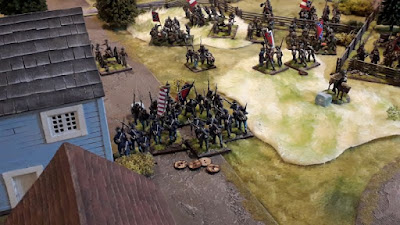 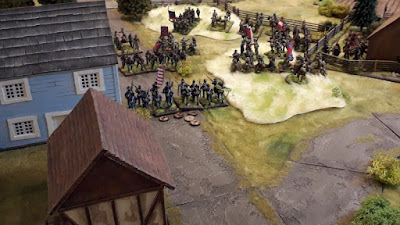 Which they win, Dutch courage and general lack to feeling a spatial awareness will have helped 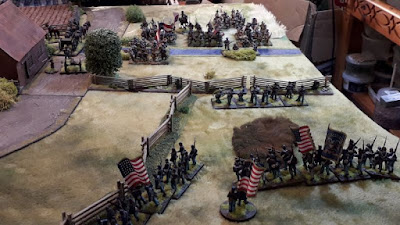 However my right flank is under pressure 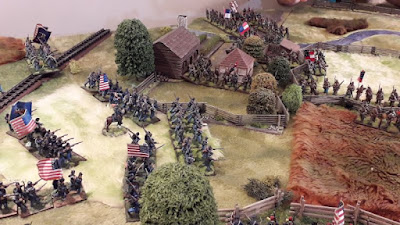 Here we go. THe Left flank is in position and ready to unleash hell 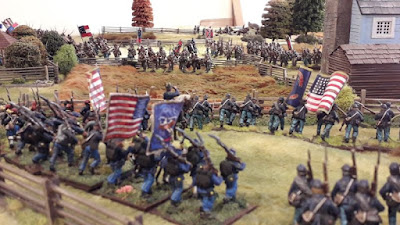 Still they come in the centre 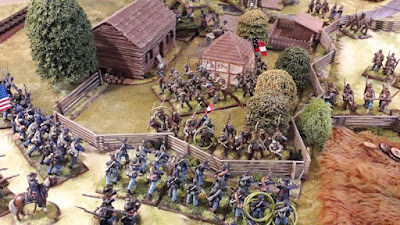 Hand to hand around the farm. Need to win this and roll them up 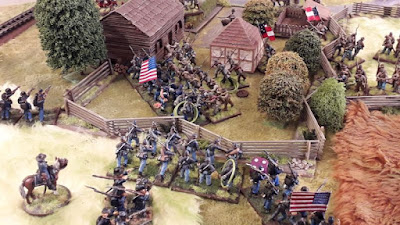 1 unit running and fighting the next 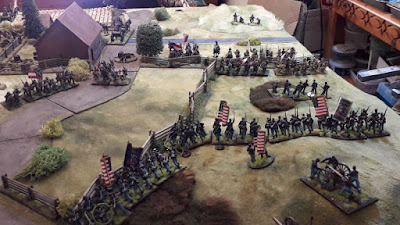 Need to be quick 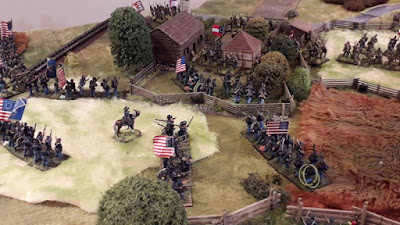 We continue to press 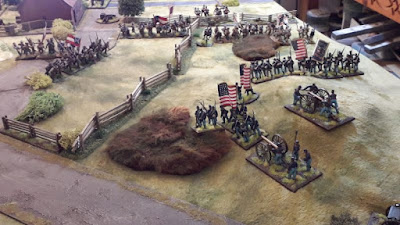 But it's too late. Baxters brigade has routed and left a very small brigade against 2 brigades. Time to bug out.
A victory to the Rebels, not decisive but a victory. I have no centre left to rescue the right flank and whilst I'm confident I'm going to roll up from the south, Matt is about to lose a brigade, there are still too many men to get though and i will have nothing left to rescue.
God that was brilliant. The rules continue to work well, the melee rules need a little work but not much and using brigade activation can be very confusing - need markers for that.