The Final Confederate Units (for now)

So having committed to completing 2 opposing divisions of my ACW forces I've completed what I need to do for their first full outing at the end of the month. We will be sorta fighting the 1st battle of Kernstown in a dance studio near Billingham. I finished the Union forces a couple of weeks ago and have now completed the Rebels. i say completed but you all know what I mean.

1st up a couple of bases of horse holders from Perry 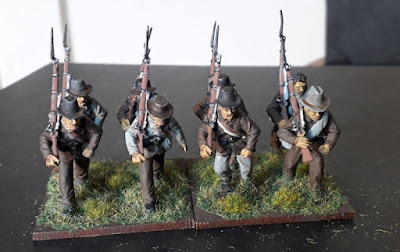 Finally a couple of bases I was missing - Perry plastics

There are 2 more limbers but the photo was shocking, even by my standards.

So that is 36 infantry regiments - 730ish figures, 4 cavalry regiments plus dismounted figures - 48 cav plus 40 foot, 12 artillery pieces plus 4 limbers, about 10 commanders and some bits. All in all about 900 figures, about 760 painted by me. I still want to do some skirmish bases for the infantry and at the moment they are regiments of 20 figures. Whilst I can merge them into larger units I would like to make some of them 24 figure units, although I would need a new boxing system for them, so in theory another 150ish figures to paint
I started them in my 1st analogue hobbies challenge and they have come on a pace since then. It's been a 5 year voyage and i think they will take me most of my life