I'm cracking on with my Brunswickers for a potentially huge 10mm 7YW project. I'm really liking painting these, cavalry are a pain in all scales though. The Brunswicker organisation was very similar to the Prussian one, 2 battalions to a regiment and detached Grenadier battalions, more on those in a future post.

1st up are the von Imhoff regiment. The flags come as blanks and I'm quite liking painting them

From behind, hopefully the enemy will never see this side

Next the von Behr regiment 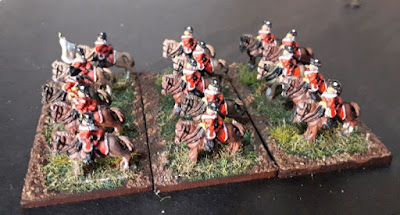 And finally the Brunswick Dragoons

Really enjoying painting these and I can see me painting dozens of regiments.
And now for the tricky bit. The original plan was to run a bit of a supporting project alongside Matt from the Dungeon. The Brunswickers seemed a nice idea as it is a decent sized force, 5 infantry regiments  and 3 cavalry including an exotic lancer unit, plus artillery. These would then turn up on the Prussian side. \so this would be cool and I could collect Hungarians to field as opposition with loads of Hussars and Grenzer units. So far so good. BUT, and it's a big but, I do like big buts and I cannot lie, the Brunswickers never fought alongside the Prussians not fought against the Austrians, Russians, not even the Swedes. The Brunswickers fought the French alongside the Hessians, Hanoverians and Brits. Basically Western Europe while the Prussians fought in the East. Bloody Typical.
So dear friends do I collect Austrians and Prussians and combine with Matt's armies for big battles or do I collect Hanoverians and French and fight smaller battles, for now. Dunno, fancied collecting the Hungarians, but playing the Brunswickers out of context seems weird. They can easily double as Prussians.