The Battle of Xanthos

Today I had the joy of playing Matt in his dungeon. We played Republican Romans (me) vs Persians (Matt) using Kings of War. I really like the rules, played about 4 times now and think I'd lost the previous 3 times. The last time these 2 armies (or their kin) met the Romans got mullered by Matt's elephants. So I bolstered my forces with a large Numidian contingent including elephants.
I was invading and had a large(ish) flanking force (1/4 my army) which would arrive randomly from turn 3 on a random flank.
The battle field was "L" shaped and about 8 long and 4 wide with the short leg of the "L" being another 3 by 4. Matt was the outside of the "L" and I was the inside. Enough waffle on to the fighting 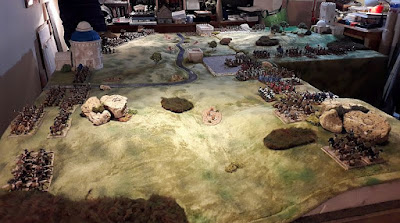 The opening, I'm on the right. Beautiful isn't it. The most panoramic battle we have fought 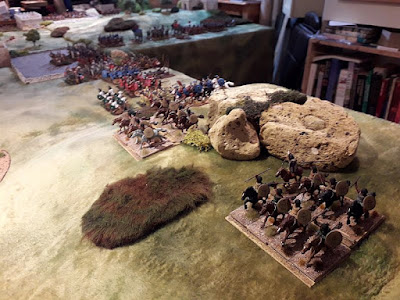 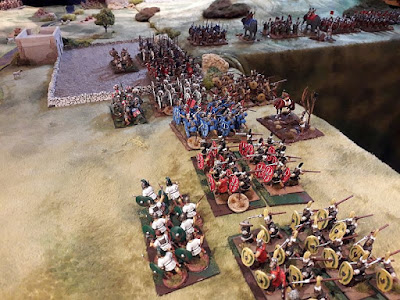 These guys here. At the top is a walled field with my Triarii and some Cretan archers. These were the pivot and the plan was to swing both flanks around this pivot and crush the persians

My right, heavy infantry and elephants 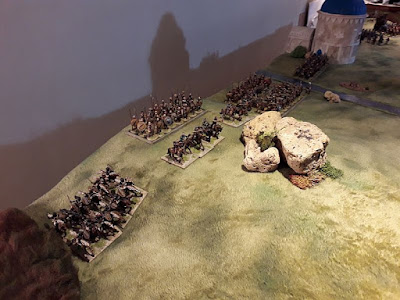 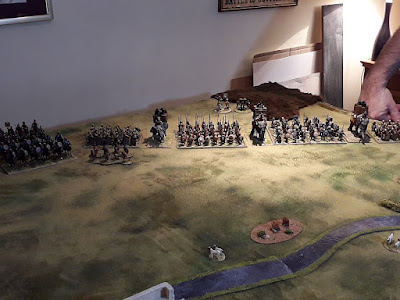 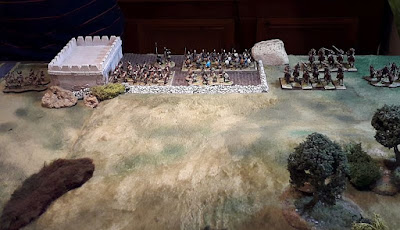 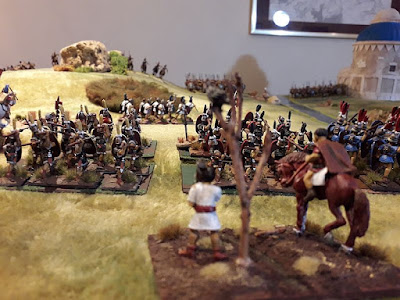 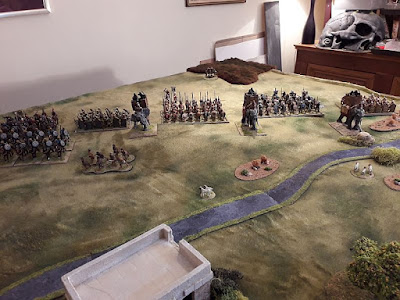 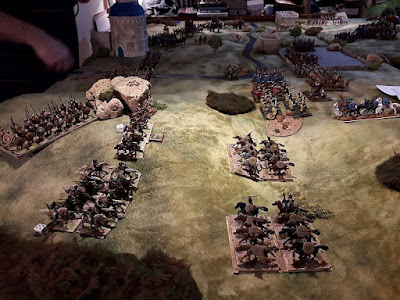 My left, looks good doesn't it 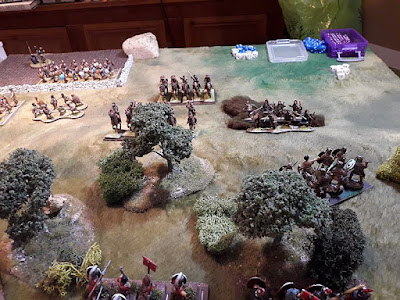 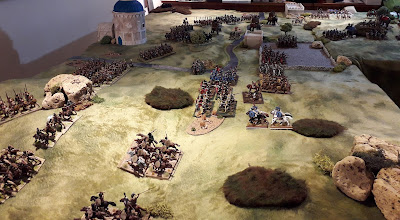 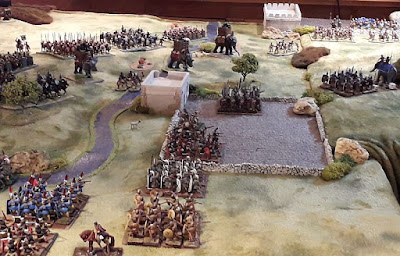 Matt's eleohants move. I was on the inside and as I advanced my troops spread out. This was a fatal error. Matt's naturally moved closer together. I hadn't spotted this 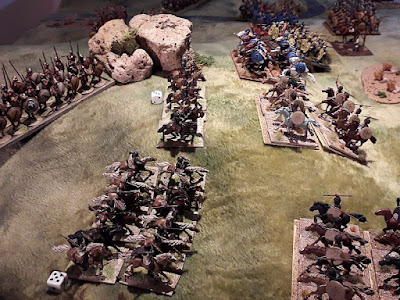 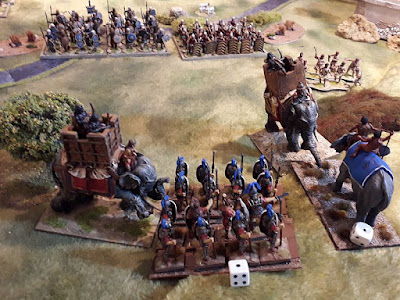 However it's worse for me. Told you my units had spread out. it in the flank by a charging elephant has only one outcome - flat Romans. 2 other elephants clash. Fairly even 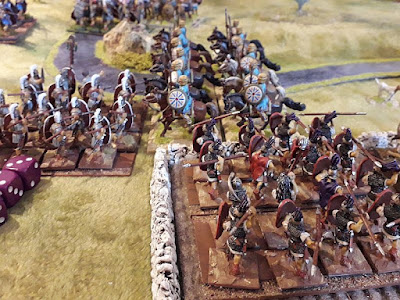 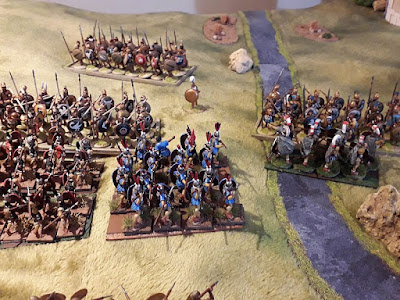 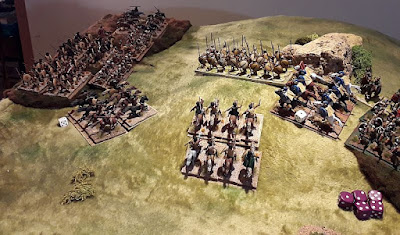 Very well. My flanking force arrives and Matt is going to be toast 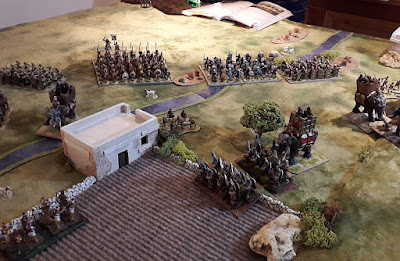 However my centre is in really deep trouble. Not enough forces and they need the left and the right flanks to hurry up 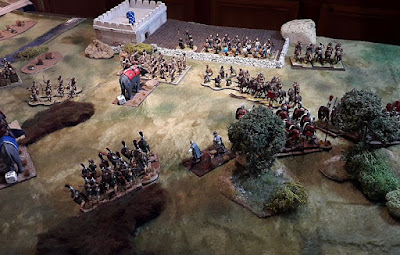 The right kicks in to action. My elephant charges the thacian bowmen.Should be a doddle. Get rid of these and I'm in 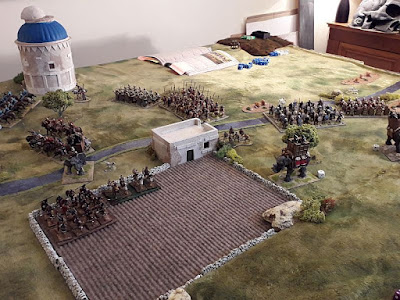 And not a moment too soon 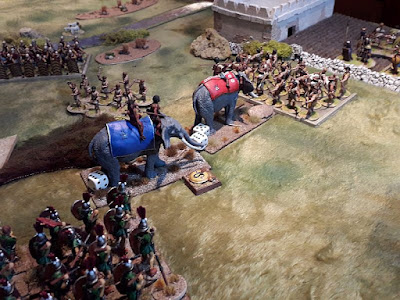 Disaster. My other elephant wavers and goes berserk. It charges directly in to the rear of my other elephant. that's 64 dice. I kill the archers but my red elephant is gone 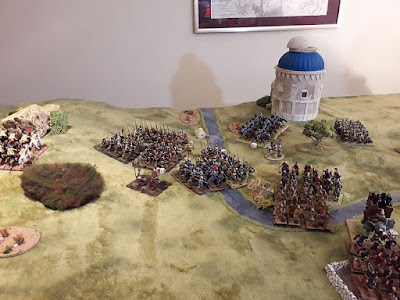 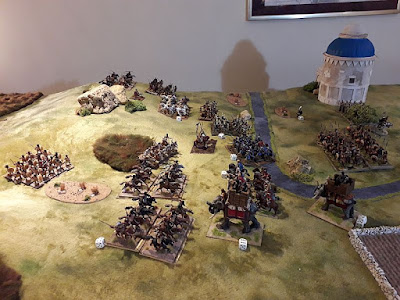 With my centre gone and the right messed up it's all on the right but Matt has more, fresher, better troops. including the elephants 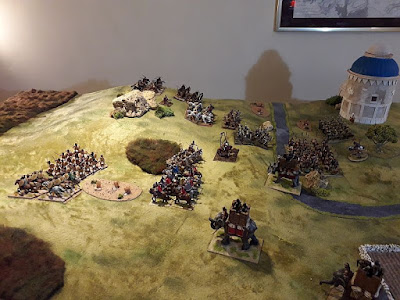 In the end I can't cope and it's a big victory to Matt.

This was a brilliant game and a deserved victory to Matt.. Once again I got my units isolated and then picked off. I made 1 set up error - heavy infantry facing light troops. It takes to long to kill them, and I was unlucky with the mad elephant.
The rules are great and I'm getting more familiar with them. We think that elephants are far too powerful. In the real world if you can get you elephants to catch troops in the open, in the flank etc then they were devastating. However this didn't happen often and generally they were often ineffective, especially vs missle troops and pike blocks. Elephants are hard to hit and hard to wound )OK so far, they are epic in the attack, still OK, but they are incredibly hard to rout. That is the problem. They have morale significantly higher than a regiment of Triarii (50% higher) and similar to a horde of spearmen. I imagine that elephants would tire easily and should have a morale similar to an infantry regiment.
Also Numidian cavalry are a little too good, too many attacks. Think we will tweak the rules for next time, although that could be ACW so elephants would be interesing