Partizan II - The glorious bravery of the Camel Corps

The sun baked down relentlessly on the Sudan desert as the engineers tried to move the next rail into place. It was hot work and progress was slow. Every day they would advance and form up in a new camp built by the defending forces. Their force was strong with 2 regiments of Guards to defend the train, a Naval Contingent armed with newfangled Gardiner guns and a battery of Royal Artillery. It was approaching the end of the day and a supply column was coming in from the East escorted by the Lancashire Regiment. They had seen some skirmishing and were bringing in supplies and wounded to the train. The foot hills were full of signallers and various small parties were surveying the land whilst journalists watched on.
Far to the West the Camel Corps had taken up position in the walled village of El Damer. Their commander Major General Herbert Stewart had brought his wife and daughter along, so confident was he of a peaceful advance. To the South the 18th Hussars were on patrol and all was quiet. 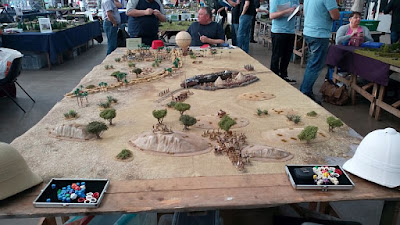 The battlefield (North is on the left) 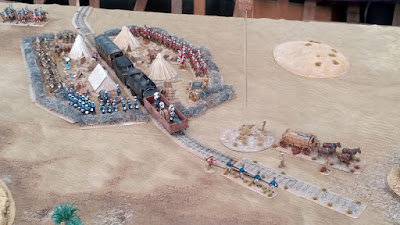 The train and zariba lined encampment 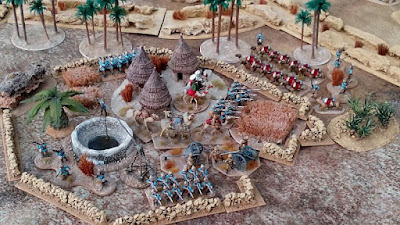 The camel corps in El Damer

Suddenly to the West appeared Kitchener advancing quickly on his camel mount and from all sides Mahdists appeared out of the desert. He may have been a brilliant scout but it was if he had lead the Mahdists to the encampments. "Stand To" went the order and all across the battlefield the Imperial forces readied themselves for action. Zariba barricades were quickly finished and manned, outlying skirmish and scouting parties were recalled and men readied themselves for battle. 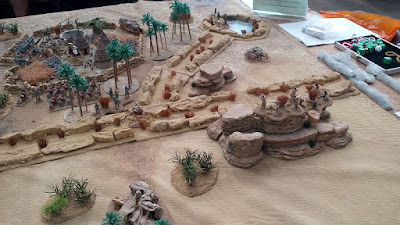 The arrival of Kitchener on his camel closely pursued by Beja skirmishers. He makes a B-line for the General in the Zariba 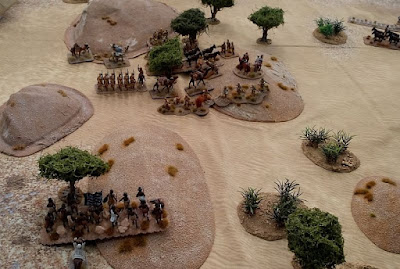 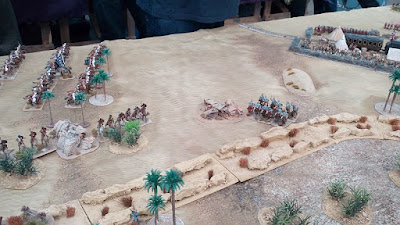 Quite a lot of cavalry approaches threatening to cut off the Camel Corps. The 18th Hussars try to screen 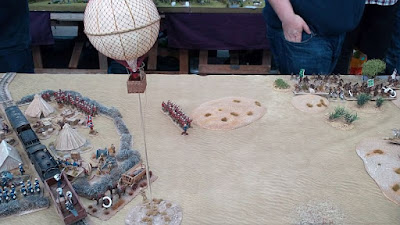 Impetuous as ever Col. Burnaby leads 1/2 the Scots Guards out to protect the column 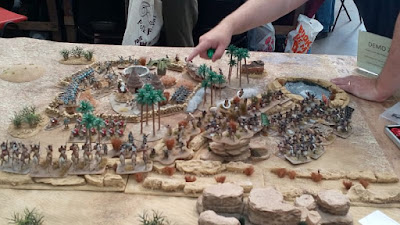 The Camel Corps are in trouble. Too many Fuzzies and not enough bullets 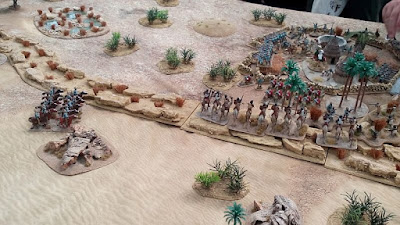 The Hussars rush to their aid 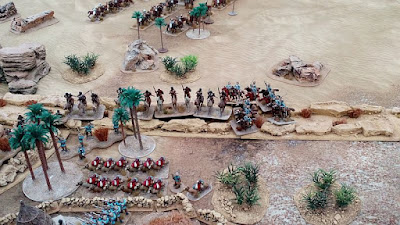 And smash into the side of some Beja  Camelry, seeing them off but the Baggara Cavalry inflict heavy losses 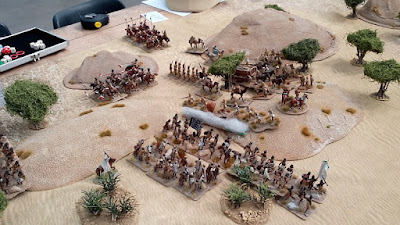 The Lancs hold off an initial Mahdist charge as 2 regiments of Bengal lancers arrive from the Indian Brigade. 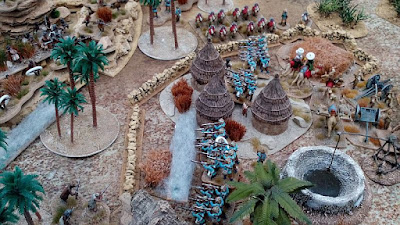 The Camel Corps prepare to defend themselves 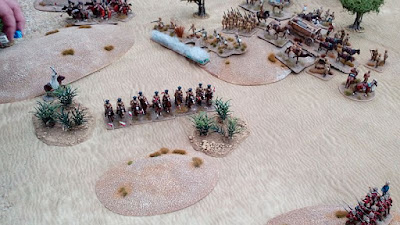 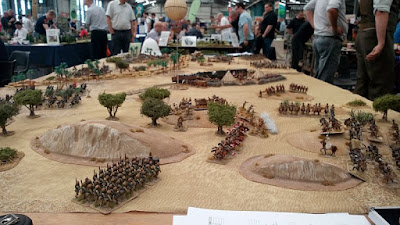 The Indians start to arrive in force 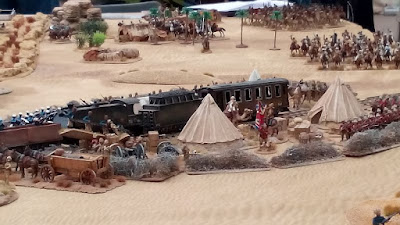 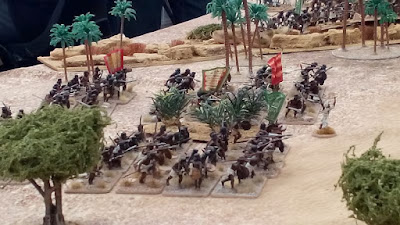 as yet more Mahdists arrive 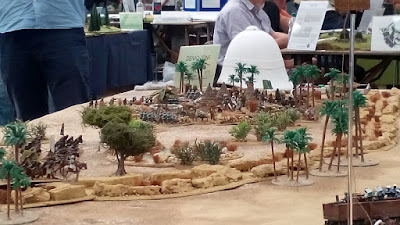 and more. The Camel Corps is completely cut off 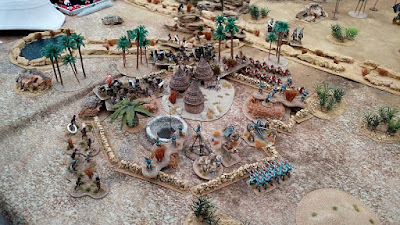 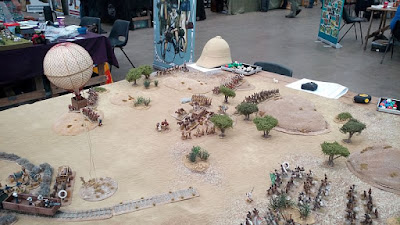 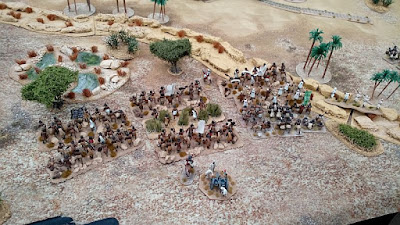 and they've got a cannon 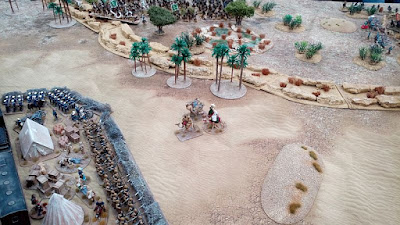 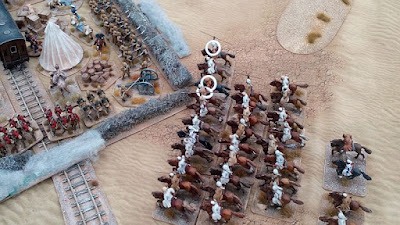 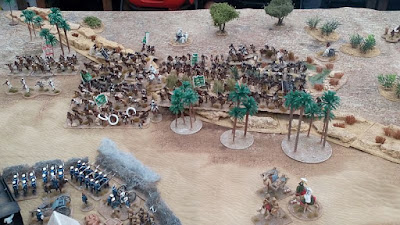 But the Mahdist horde under the command of the Mahdi himself is poised to overrun the the zariba. 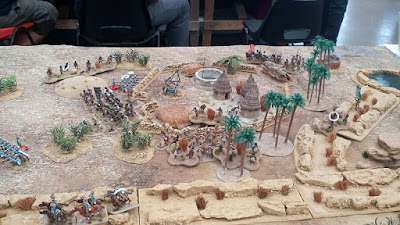 The last stand of the Camel Corps. Camels stolen, 2 companies routing but they fight to the end 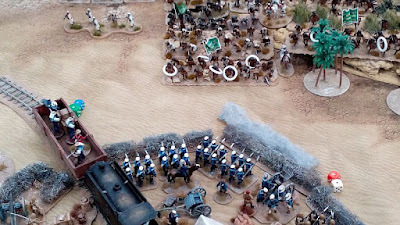 The Navy try to pour fire into the Madhists but both Gardiner guns jam in the same turn. The presence of the Mahdi gives them a save on a 4,5 or 6. They will hit next turn and overwhelm the zariba 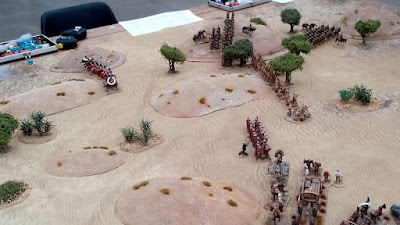 The Indian brigade gets into position but they must be too late. They pour fire into the flank of the Mahdists and cause some to rout but still them come 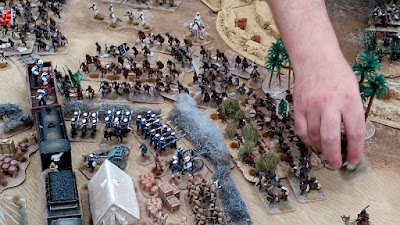 The navy fire and then its a bayonet fight, 7 attacks from the Navy vs 14 from the Mahdists A draw and the Mahdists are starting to be cut down 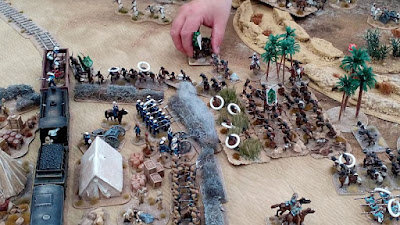 a win for the Navy and the Mahdists are wrecked.

It was a close run thing indeed and the Camel Corps is pretty much gone saving the women. A noble way to die.
It was a brilliant battle well received by all at the show. Dave wrote the rules and they worked very well indeed.


“Then out spake brave Horatius,
The Captain of the Gate:
To every man upon this earth
Death cometh soon or late.
And how can man die better
Than facing fearful odds,
For the ashes of his fathers,
And the temples of his gods
”
Thomas Babington Macaulay,
Lays of Ancient Rome