So to continue the history I took up painting figures again about 7 years ago. it cured me of clinical depression, although I can still be a fairly grumpy sod.
I still had a few unpainted figures left, mainly vikings, and wanted something new to paint. I found the Wargames Foundry site andpurchased a huge Pirate army for about £200 - the best part of 300 figures. These were colourful and fun to paint. They have already been seen in these pages so no photo, but good to maintain chronology.
Next up a Pict army from Foundry again. Figures not really great but Oh the joys of painting tartan and the horror of gloss varnish. I have some nice wall breaker rules for these - they appear from the ranks, attack before the main charge then continue fighting through the enemy until they die or make it through to the other side which breaks the enemy, then the main force attacks - causes a bloody mess.

Another Foundry army next, Trojans. Don't know why I bought these I really hate chariots - "Quick they've got chariots build a very low wall or shallow ditch".

My last Foundry army was an jungle tribes African army. 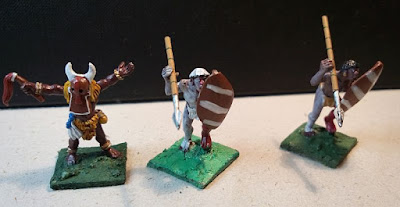 This is starting to read like Rimmer's Risk Diary so I'll stop there. These 2 songs should tide you over
New England and Unisex Chipshop and for some culture Pubbe Gagge