Today I popped over to Matt's for some back of beyond action with Afghans vs British beyond the Khyber Pass. These punishment raids were common place in the late 19th and early 20th Century and they followed a common theme. Tribesmen would stir up trouble with unreasonable demands, like freedom and self determinaton, and the British would relatiate by attacking the village, at which point the Afghans would melt away, then blowing up the watch tower and stealing the wood (a precious resource in that part of the world). The Britsh would then start to retreat and all hell would break loose as the Afghans reappeared and attacked. So that was the scenario. Matt was the British and I was the Afghans. I would start with a handful of units and recieve significant reinforcements at random locations during the battle 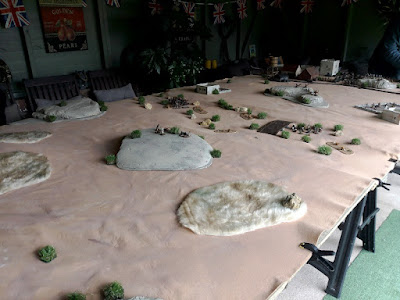 THe table, Brits at far end about to leave the village 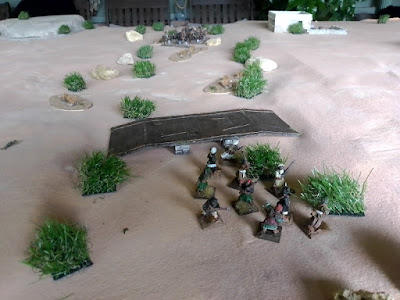 The only bridge over the wadi, with my guys waiting in ambush 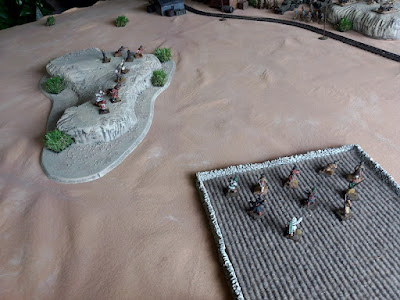 More Afghans hiding in the hills and a walled field 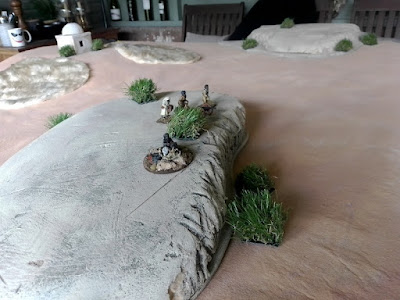 My heavy weaponss, a maxim and a stolen mountain gun 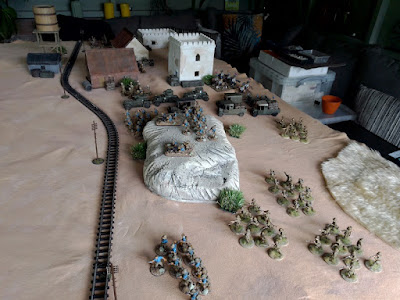 Loads of Brits with 3 AC, field gun, machine guns, cavalry inc Bengal Lancers and loads of infantry. I have to stop the trucks getting off the far end of the table 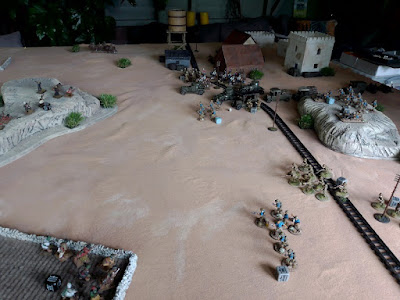 Brits advance and there is a sharp exchange of fire 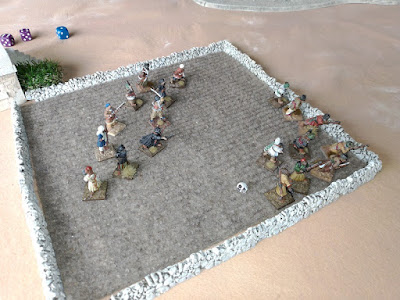 My 1st batch of reinforcements arrive to support the front line 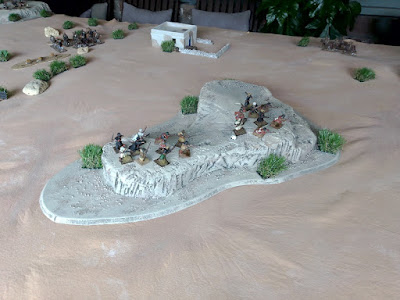 on the central hill 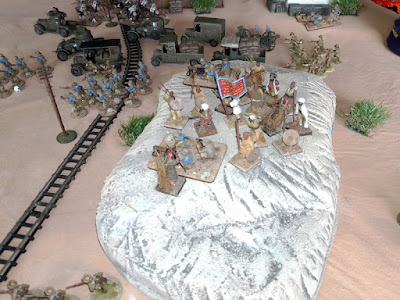 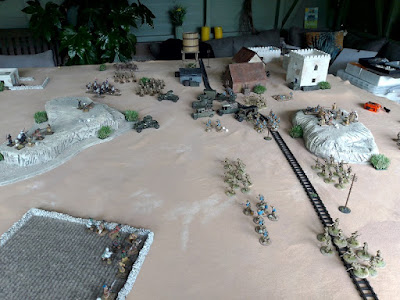 THe brits push forward. I fire but the Afghans are inexperienced which makes them worst shots with lower morale that the Brits, but they do fight as well as the Brits. So I'm stuggling to lay down enough fire 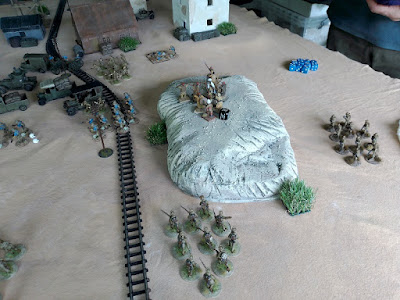 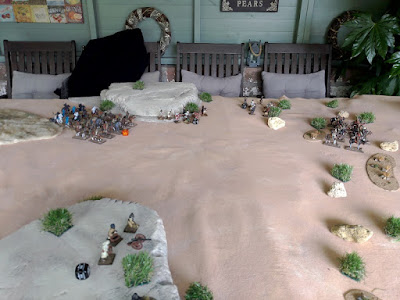 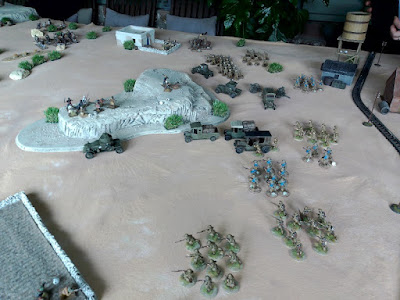 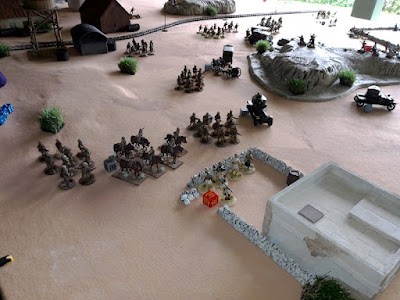 The Brits attack the fram on my left, and I unleash a killer volley that routs the Bengal Lancers. I bring up reinforcements 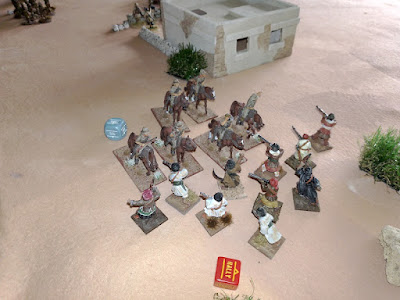 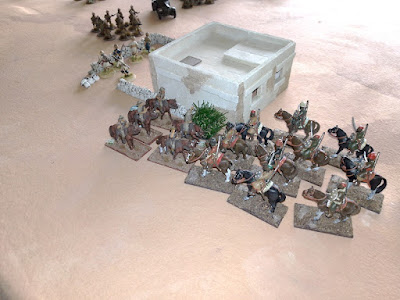 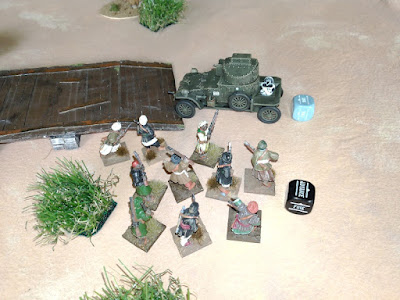 An armoured car makes to  the bridge and the Afghans attack, but only manage to scratch the paintwork. Some T-cut will fix that 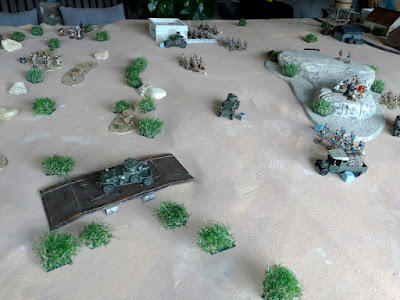 The supporting British take out the ambushers 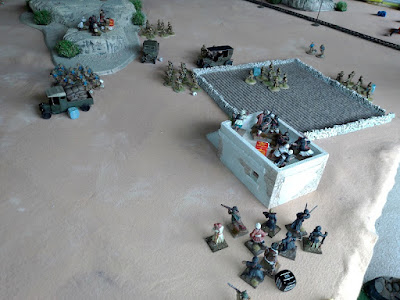 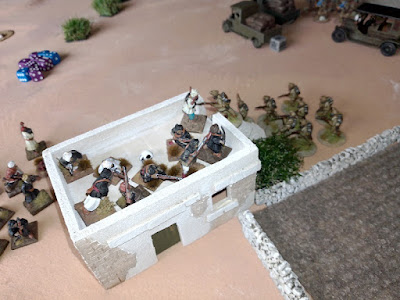 They even try and unsuccessful assault 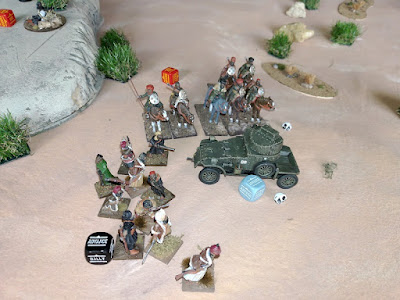 The lead AC has crossed the wadi and I charge it, but again there is barely any damage and it costs a lot of lives 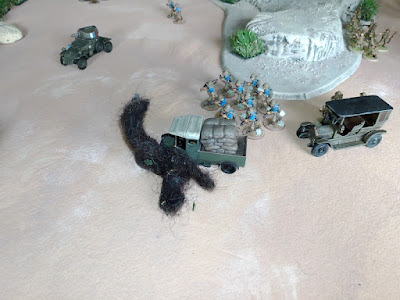 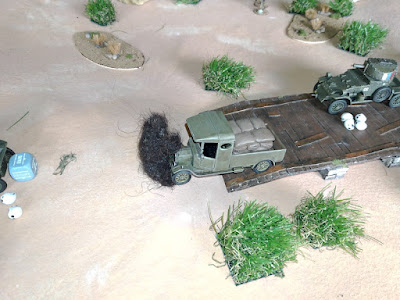 and then the maxim gun takes out the other one. At which point we call it a day and the Afghans melt away. A minor victory for the Afghans.
A fantastic battle, perfectly balanced and great fun.

Email ThisBlogThis!Share to TwitterShare to FacebookShare to Pinterest
Labels: Back of Beyond, dungeon