I've finished the Austrians I have so far for the 10mm 7YW project with Matt. The aim of the project is to fight using whole armies and not Brigade scale battles. we already do 28mm ACW at division level and this is great fun But the desire for more and yet more troops to control appeals to the megalomania that ticks away inside.
The project has to start somewhere and I'm building the Austrian Army the fought the 1st major battle of the war, the Battle of Lobositz where the smaller Prussian army marginally beat the Austrians. This was a pretty meaty battle that lasted all day (units ran out out ammo and they carried 80 shots each) with 28,500 Prussians vs 35,000 Austrians,
I'm about 40% though the Austrian army a mix of Pendraken (fabulous figures and a joy to paint) and Old Glory (not quite as good - infantry are a little smaller and the cavalry are in 2 pieces which is annoying)

The whole force so far - 5 regular infantry regiments, 2 grenzer regiments (light infantry), 5 combined grenadier battalions (elite shock troops), 3 dragoon regiments (heavy cavalry that didn't dismount to fight like infantry), 2 12lb cannon and 9 battalion guns (Austrians had loads of artillery - approx 50% more than the Prussians and it was better.) . All the Austrian infantry units had the same flags, which is weird. 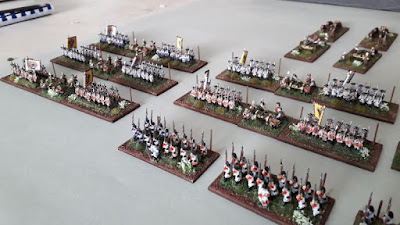 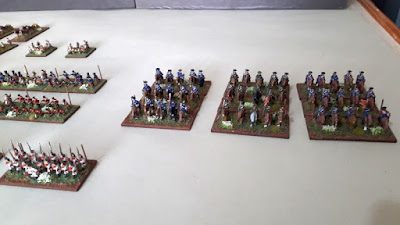 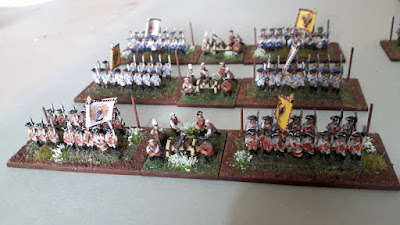 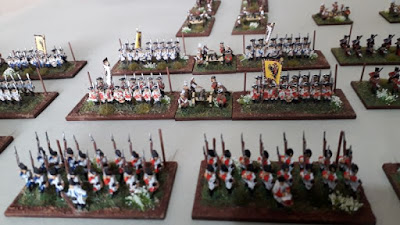 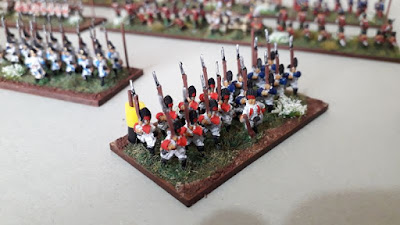 The biggest problem with large battles is knowing who is in each brigade and division so that you can keep control, or not. I've added a couple of brass pins to each stand. One will identify unit control, in this case black division, yellow brigade. The markers are from hobbycraft and a I got a bag full of various colours, more than enough. The second pin is to track casualties. At the moment the [plan is to use Black Powder rules but whatever system we use will need casualty tracking. Some units get 1 shot bonuses - 1st fire for example. Therefore i may add a 3 pin but i am concerned it will start to look like fighting with abacuses. 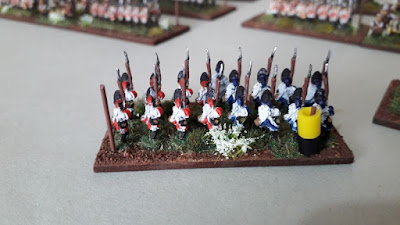 I've placed the order with Pendraken to complete the army, another 29 packs, to collect at the Border Reiver Show in a couple of weeks. That will keep me busy over the winter, although knowing me they will be done by Christmas and I'll need to restock with Prussians at the Battleground Show.