Today I went over to Matt's Dungeon for a massive ACW battle. We refought the 1st day of the Battle of Shiloh. Matt has just returned from a tour of ACW battlefields, read the great reports on his blog. Even with Matt's massive table and the huge number of troops we have we could only do a little of it. 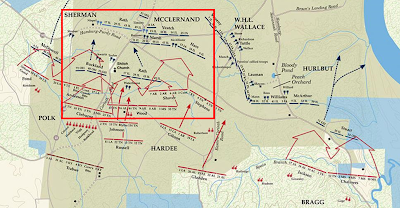 https://www.battlefields.org/
I was the Rebels and Matt the Union  so I was attacking

We played using Matt's ACW tweak of Bolt Action but we use fewer activation dice than units so that you have to manage your forces. 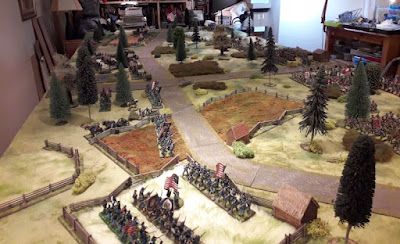 The Battlefield from the Union right 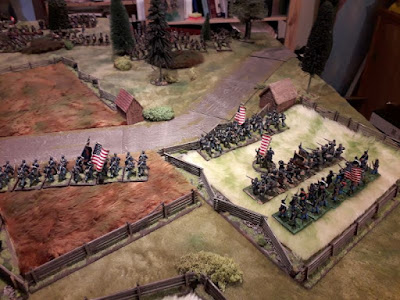 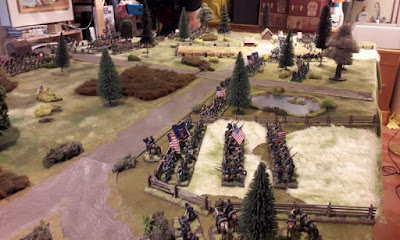 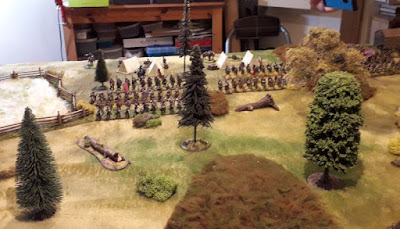 My centre, my biggest brigade but I plan to wait here and keep Matt's strength in the centre whilst I probe the flanks 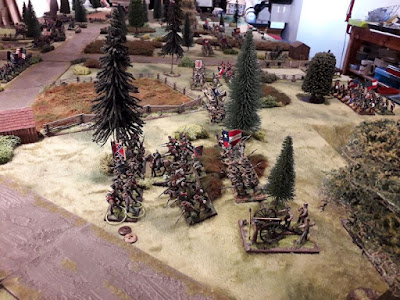 My left, i'm strong here and matt is weak so i advance 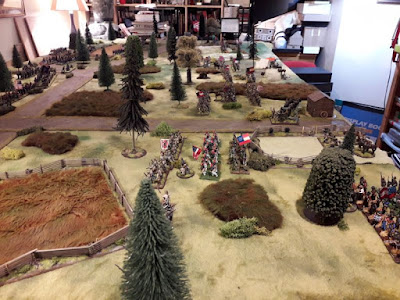 with 2 brigades and a 3rd is arriving behind 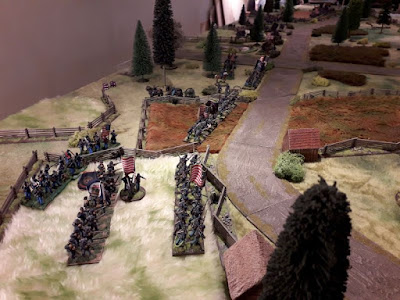 Union right facing me, he is throwing lots of 6s. mainly a 6 to hit as all the regiments are green and everywhere is light wood. This continues all day so I take lots of casualties as I advance. I have OK dice all day so this just makes it bloody 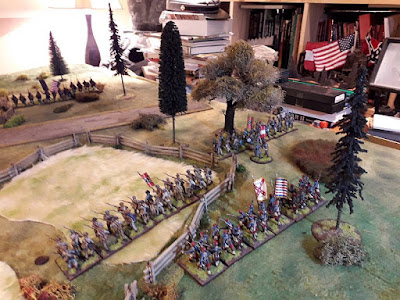 My right, I'm weak and Matt is strong but I don't want him to move about too much so I probe here 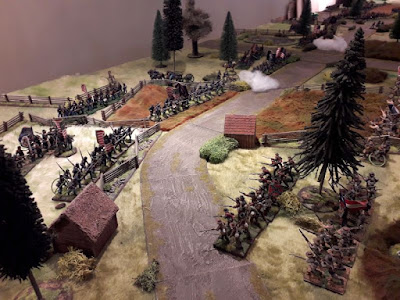 I'm getting close on my right 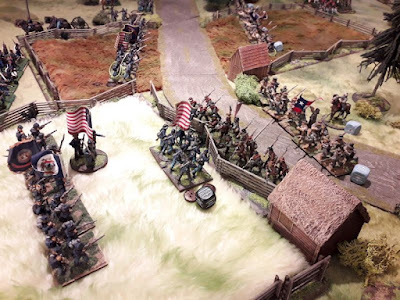 So I charge home. Matt holds on just 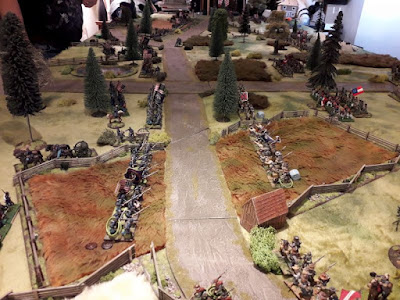 To my centre left I'm getting shot, a lot 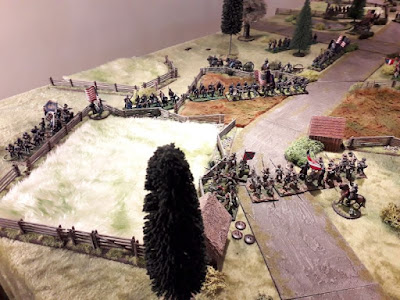 I win the 2nd melee and as the Union routs the supporting union regiment, with the help of some artillery fire from me also legs it. I just need to get in position. The fields are open ground and are literally killing fields, as was the case in the actual battle 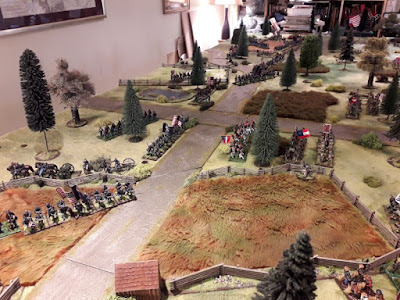 The Union centre is getting impatient and starts to advance 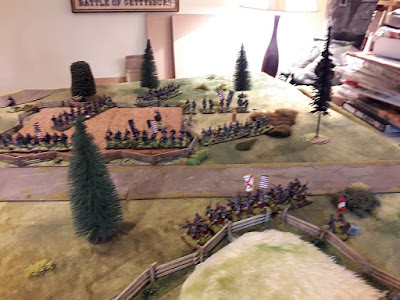 On my right my probe has advanced to the Union lines and won a melee but I can't get close enough with enough units at the same time to make it count. Schoolboy error her was that I forgot to advance my brigade commander to provide leadership support so the attack falters. I did this twice. "Generals, they are numerous but good for little" - Aristophanes 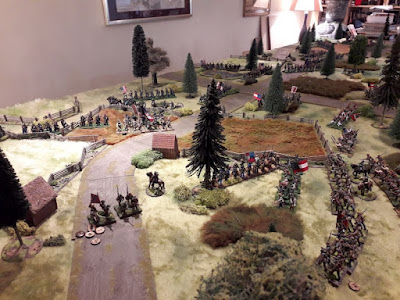 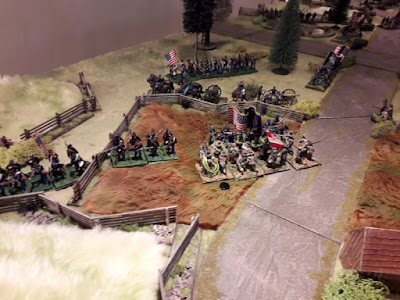 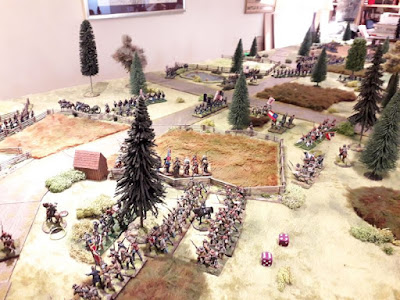 Here is my support, a fresh brigade 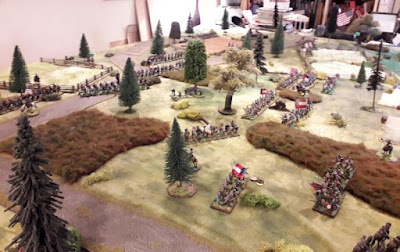 I the centre I start to advance to met Matt's advance 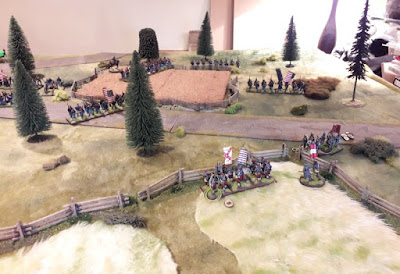 My right is buggered up 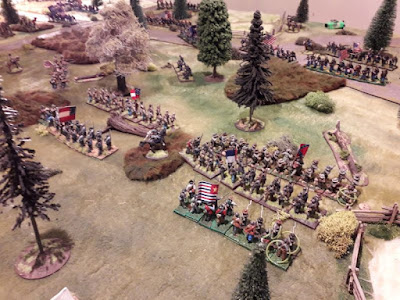 My centre, an even match for the Union centre

An awesome battle that ended after the usual 6 hours of fighting. I was going to win my left, Matt had won on my right and the centre was evenly balanced. A draw. Fantastic day out