John Insisted I Posted this Quickly

The Old Guard met today to play our 1st ACW battle. We have a group 10mm project and after much furious painting had significant forces. The used Regimental Fire and Fury for the 1st time and Dave umpired, with James riding shotgun. John even opened the rules and pretended to read them. John demanded that i publish quickly, apparently he is having trouble sleeping
The battle was Brawner's Farm from 1862 with Me and Stu being the Union, who were outnumbered, and John, Pete and James being the Rebel scum.
I didn't take enough photo's so  much of this will be via the medium of dance. 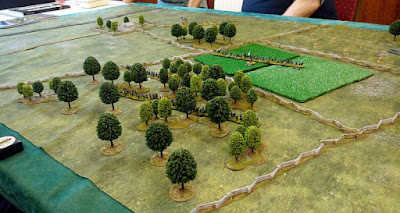 Stu starts the battle in the woods and cornfield in the centre, facing James Rebels and artillery 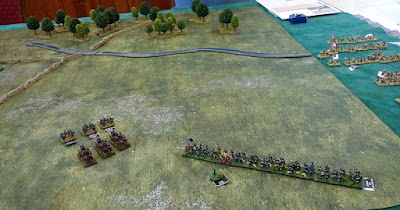 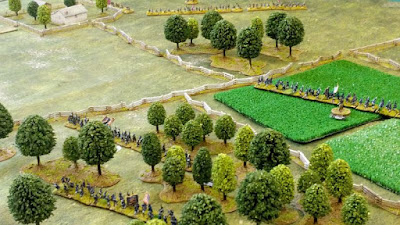 Stu's crack regiment are to the fore and he must decide what to do. My artillery open fire on James' artillery and miss so badly that I don't think they've landed yet 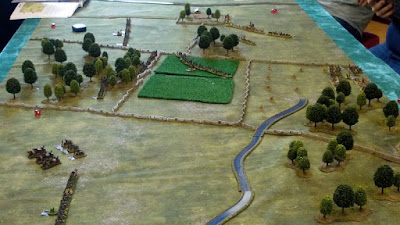 John's Georgia brigade arrive in the centre and advance to the cornfield. Stu has a choice, he can retreat from the 2 forces he is facing from different directions, or he can hold position and use this crack regiment to whittle them down. My artillery miss the Georgia boys. 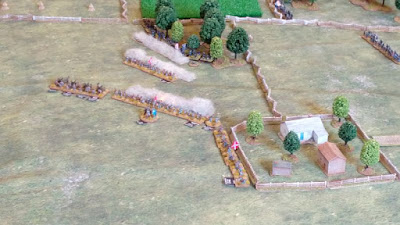 After much thought Stu advances his forward regiment into the woods to face James' infantry and artillery. A withering volley buggers him up and his guys are forced to retreat. 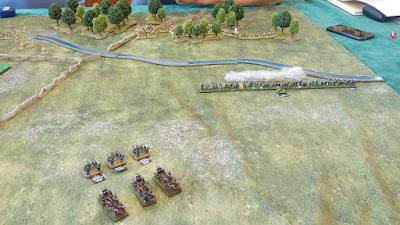 At this point I have opened formal negotiations to join the Confederacy. However at this point Pete's forces have appeared opposite me in field column. I have advanced and a devastating barrage from my cannon removes 3 bases from one of Pete's units and my infantry have removed another one. At this rate I will butcher him before he gets close. Then it all goes wrong. Pete hits a perfect 10 (D10 dice in these rules) and he disorders my infantry (disordered infantry fire poorly). Then James launches a perfect counter battery attack and destroys one or my cannon and silences the battery. 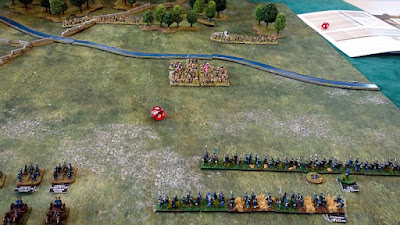 This gives Pete the chance to advance and he charges my infantry who retreat. I have received more reinforcements, an infantry unit and 4 more cannon. I have formed a grand battery and 1/2 are shooting at Pete (at much reduced effect) and the other 1/2 are causing havoc as John's force advance into the cornfield.
At this point I stopped taking photographs. On the left James is gradually slaughtering Stu's forced, aided by Stu's ability to only role a 1. In the centre John is stuck in the cornfield and although he is advancing the cost is high as Stu holds the woods and the right hand side of the cornfield. Meanwhile I am ruining the cornfield with artillery field. Many women in Georgia will lose their husbands / brothers today.
On the right I've been reinforced with a large green regiment and Pete has got some veterans. The Confederates advance enthusiastically and whilst I inflict some pain., Pete keeps coming and has the upper hand. Eventually the Union suffer heavy losses, mainly down to Stu ruining the crack Wisconsin regiment (1/3 of all our losses), although they were still in there swinging at the end 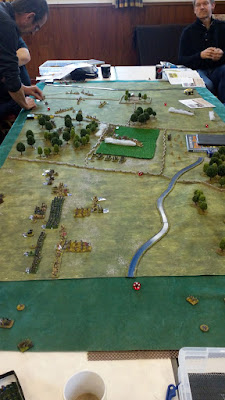 The final position. Stu holds the woods but the left flanks has, well left to be honest. I've held the rebel charge but only so that my cannon can escape. We lost but sold our lives dearly.
It was a fun day, John even attacked. It was my 1st go with the rules and I like them, simple and bloody but feel right. Artillery a bit to good, but that is an easy fix with tweaking of low ammo rules. We are putting on a demonstration at Battleground in November.