US APCs - or how I decided never to do decals again

I had a thought. For my next project I would do a US Infantry armoured infantry platoon. US forces are not often on our battle fields and I've always thought they looked cool, too much time watching the Bridge at Remagen and Kelly's Heroes.

So a platoon is 56 figures in 5 M3A1 half tracks. I bought the halftracks from Dice and Decks - limited range but very cheap, they are the Warlord ones, and I bought a US infantry box and 60mm mortar from Perrys. Whole force will have cost £90 plus the tanks I'll get. I want Grants (or Lees - can never remember which was US and which was Brit and can't be bothered to look it up), however they only fought in North Africa and I want to use them for all the war. I'll probably end up with Grants and Shermans!

On to the pictures 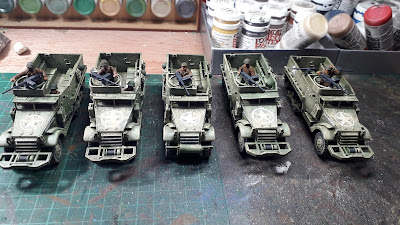 The models were OK to build, provided you don't follow the instructions too closely. There are extensive decals and i added some of these, however the hood star was too big for me to apply without wrecking and therefore I used the last intact one as a template and handpainted them. Liberal dry brush hid the fact the stars were not that star like. 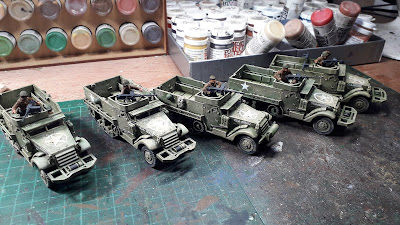 All have .50 cal HMGs and I made the gunners from the spares box. In theory each APC could have 3 additional .30 cals but that seemed a bit mad and so I gave the APC carrying the 30. cal section 2 extra ones to represent these guns. 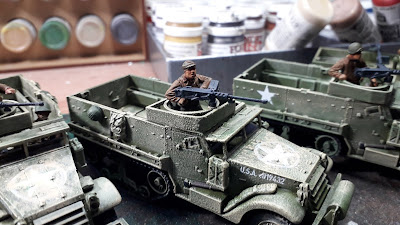 Overall pretty pleased
Not content with WW2 APCs I had 1 more Vietnam vehicle to paint, a Gage Commander. This is from Empress and is a nice model 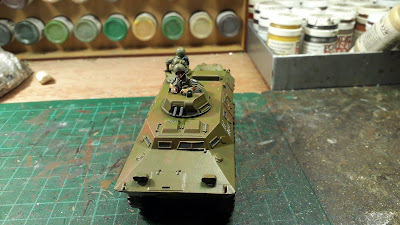 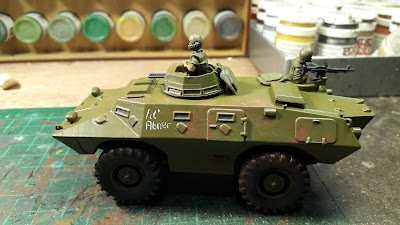 It did get a name though, Lil' Abner. The crew were extra from Empress 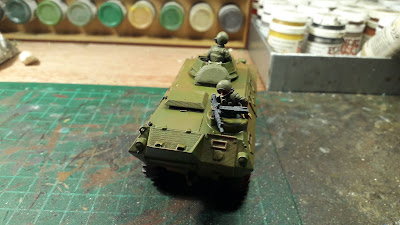