Yesterday I travelled over to Matt's to play our 1st 7 Years War battle. We both have significant Austrian and Prussian forces, and this would be our 1st major battle. We would also be using Honours of War rules, my 1st time and Matt's biggest battle wth them.

As usual we went big and Matt had planned out the Battle of Leuthen in winter 1757. Weather was nice so we played in his garden "pavillion" on a 12 ft by 6ft table. However the sunshine made photography shady 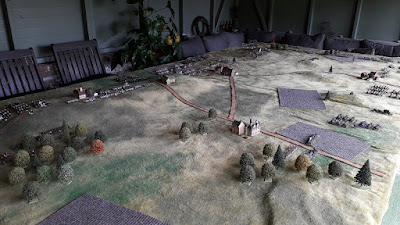 The whole battle field, told you it was big and in the shade. Prussians on right (sunny side) and Austrians to the left (in the shade) 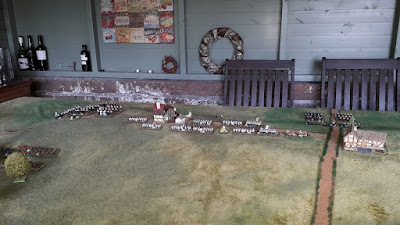 The Austrians hold a very strong position on a long ridge. They knew the Prussians were opposite but their position is strong and why would the Prussians attack in winter. THe Austrians has so many men that we had to use markers for 2.5 brigades until sufficient Austrians had died that the figures could be recycled. Shouldn't take long for that to happen 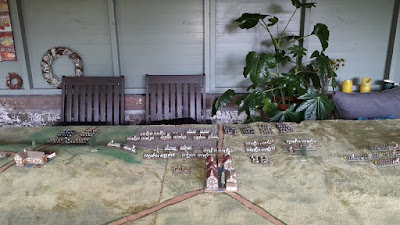 Austrian centre, very powerful. THe Austrians were confident and had sent their grenadiers back to the regiments and left most of their artillery elsewhere! 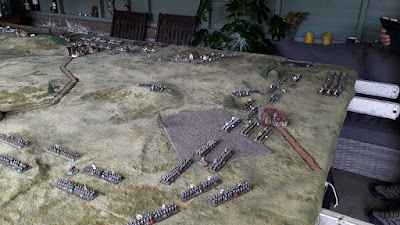 THe Austrian flank around the village of Sagschutz is held by inferior Bavarian and Wutternburg troops. Frederick, in a masterstroke (you can imagine him telling his audience this) has moved his army round to the flank and was about the launch an smash into the Austrians. THe Prussians had more guns, better troops and during activation generally got the 1st go. Each brigade is activated in turn and on a 6 get a double move. For the Austrians this double move also applied but on the roll of 1 the brigade remained stationary. 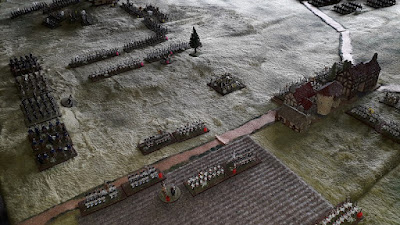 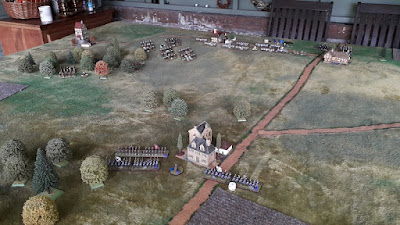 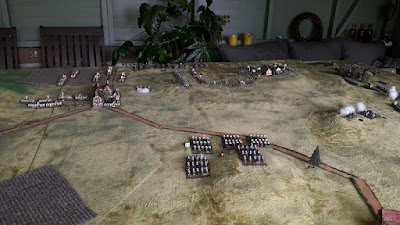 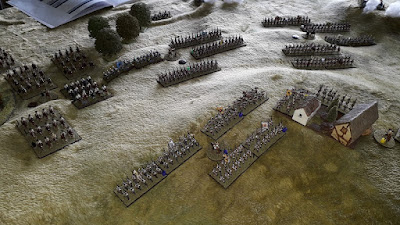 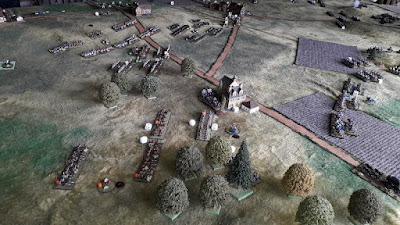 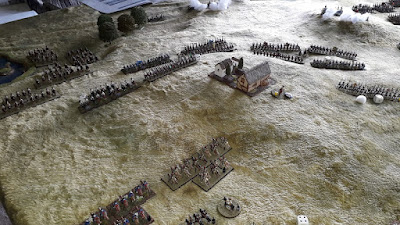 THe Prussians kick the Austrians out of Sagschutz 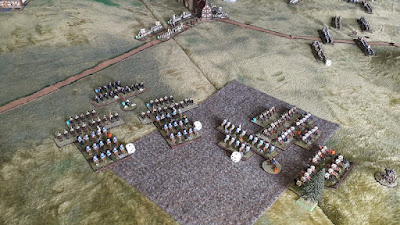 THe cavalry clash.
And then there were no photos.
So the cavalry have clashed in the middle and it was pretty much a draw with the Prussian heavy cavalry brigade getting a mauling.  Both sides attacked again but one of the Austrian brigades failed to activate and their counter charge went in unsupported. The result 2 broken brigades, 1 each, but the remaining Austrian brigade in a very bad way. THis would have been OK but the supporting infanry also failed to activate.
In the next turn the remaining Austrian cavalry brigade failed to activate and sniping from the nearby village routed a regiment and the brigade folded. The Austrian advance had been halted.
Back over at Sagschultz the Bavarian and Wuttenburgers had fled and the Austrians launched a cavalry charge, supported by infantry against the advancing Prussians but both brigades were lost. The Prussians held the village but there were still 2 lines of Austrians facing them so they would get no further.
More Prussians had flanked the village and advanced directly on Leuthen and the Austrians unleashed hell on hte front Prussian brigade. Now in HoW 3 wounds makes regiment less effective, 4 makes them retreat out of range and 5 routs the unit. More than 50% loss of a brigade routs the brigade. The Austrians routed 1 regiment and forced the other 4 to retreat, the brigade held. Unbelievable!
At that point the day ended and we totalled up the roster. THe Austrians had lost 6 brigades to the Prussians 1. Whilst the Prussians had to take the villages on hte ridge and got nowhere near as the Austrians still had almost as many troops left at he end as the Prussians had at the start, but the butcher's bill made it an obvious Prussian victory.
It was a great game and I really like the rules, as always with rules we got a couple of things wrong but nothing important I don't think. Where did I lose? Detail in the brigade actions was my downfall, especially in the counter charge. Need to pay more attention here.The failed activations didn't help, but that is war and didn't impact the final result, just the size of the loss.
There are a couple of things that I didn't like. Cavalry don't charge infantry to the front very successfully and I would remove the charge bonus here. In 7YW the cavalry fought the cavalry and then the victors flanked the infantry. The other point is that Austrian Hussars were really great (they are Hungarians after all) but the rules made them inferior troops. I would have made them normal ability (they are light cavalry after all). This was not important in hte battle but did bug me.
Overall great.
P.S. I had played the 7YW battle the day before on my way back from holiday against Dave but eff'd up my deployment and got killed, so we shall gloss over that.