Hope you are all well. The Analogue Hobbies Painting Challenge has started. This is my 7th Challenge and one of my favourite parts of the year. The Challenge is responsible for the rejuvenation of my wargaming hobby. I have a habit of painting loads of figures and then getting pipped at the post by Miles on the last day.

This year I have 2 major projects; 10mm Italian Wars (I am going to paint hundreds of 10mm Landsknechts) and 28mm Dunsterforce.

For those of you that don't know about this weird unit then potted history. Dunsterforce was formed at the end of 1917 to protect British interests in the Caucus Mountains as a direct consequence of the collapse of Russia. It was initially made up of a handful of volunteers with the aim of training locals to resist potential expansion of the Turks towards Baku on the Caspian Sea and the oil field there. In 1918 it was reinforced by 39th Brigade and held Baku for a month before being forced to retreat by the Ottoman Army of Islam.

Dunsterforce was the Proto-SAS and with support for Cossacks had many adventures. They took a train of refugees through enemy territory (Think NW Frontier film with Kenneth More) and sailed into Baku in ships flying the Serbian Flag. They only had the Russian imperial flag, couldn't fly the British one as that would be an invasion, and the locals wouldn't them fly it, so they flew it upside down - the Serbian Flag.

Enough waffling, I could go on for hours. The plan is to use them in Russian Civil War campaigns, which we play using Bolt Action so I've finished a couple of sections 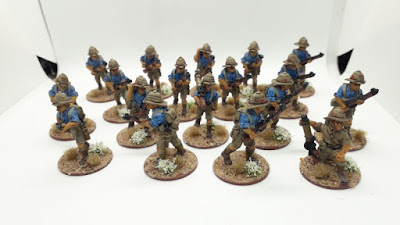 Each section is 10 figs, only 9 each here as I already have the officers (colonial conversions) 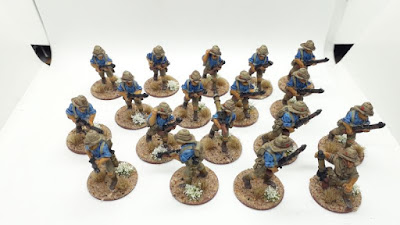 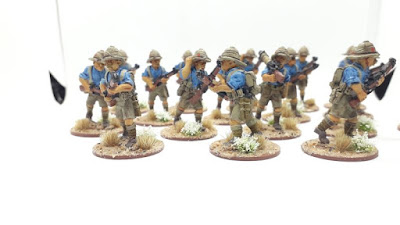 I'm from North Staffordhire so the stars have aligned 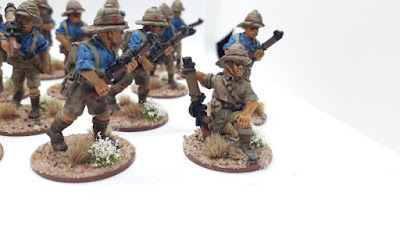 I've discovered Vallejho colour washes and love the effect they give onthese Copplestone figs
Have a good Christams and a happy New Year. Many 2021 be less of spectacular pain in the arse.
Posted by MartinC at 20:15