Thomas' Legion of Highlanders and Indians, plus some other stuff

So on a hopeful day for the sanity of the world I've finished some painting. Some time ago I said I'd completed my ACW collection. I had a division per side and that should have been enough. But no. I'm getting a couple of unusual Union regiments for Christmas (Marines and 79th New York). Well that interfered with my OCD (or CDO as it should be spelt - alphabetically), so I needed some Confederates. I didn't just want to paint some more grey and brown troops so I needed something unusual. Col Bill was selling some bushwackers so I bought them. They are from Company D and are OK. The poses are nice but the modelling and detail is not fab.

So I had a play on the internet and found Thomas' Legion of Highlanders and Indians, or the 69th North Carolina. They were an irregular but very large unit of backwoods men and Cherokees, upto 2500 strong in 2 battalions. Mainly they were based in hte Confederate states but did fight in a couple of battle and fired the last Confederate shot before the surrender. Company D also sell the Cherokees so I bought them. 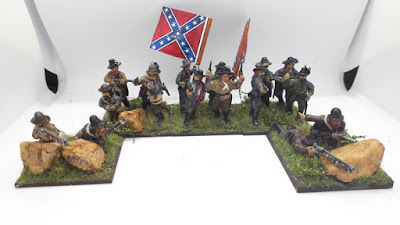 The highlanders with 2 bases of snipers. 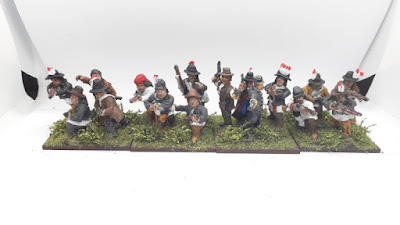 The Cherokee - 4 bases of these including one with the Outlaw Josey Wales. So I have 2 options - a massive 28 figure unit with 2 sniper bases or 2 smaller regiments. They are armed to the teeth so may be good at close up work. but their morale was sketchy. in one battle they wouldn't stand their ground in the face of enemy fire and charged. The Cherokee scalped several of the Union troops and the Confederate command had to apologise to the union commander.
Obviously I didn't just buy these, i also bought some dismounted confederate cavalry

These are enough for a regiment in a skirmish line. Only problem is I have no mounted troops - more stuff to buy
And finally, some knights templar. I painted the foot troops earlier but bought the Gripping beast boxed set 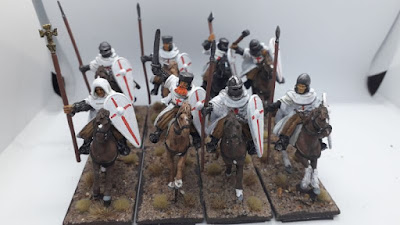 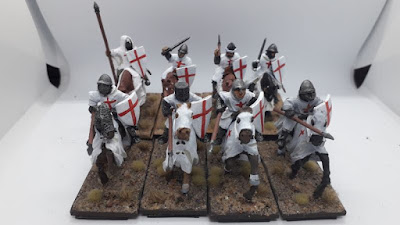 I also bought some on barded horses with heater shields - little later. The 4 at the back are fromthe bits box and I added the cloaks and surcoats using PVA and tissue.
Right, off to work out how to take a holiday before Christmas