The boss sent me home from work today and took over my afternoon's teaching. Think I may actually ill and not have man flu.
Long bath, fixed the tap (it was not properly screwed on) in 5 minutes. Drank Lemsip, rubbed Vick over the relevant areas and went to bed for a couple of hours. Woke up feeling human, which is good cos I've got lots of research meetings and teaching tomorrow
So I did a bit of painting.

First up 3 masked Africans from a Northstar lucky bag 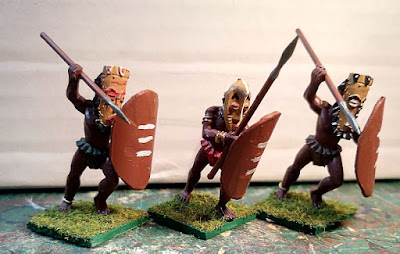 Next up some homemade figures. Whilst I love the variation you get in plastic figure boxes you do end up with a very full bits box. What would be a good idea would be if somebody made body and leg only packs of figures that I could stick heads and arms to. Does anybody know if anybody does that?
So I tried to make my own using a very simple carved body and legs, making a plaster mould and then casting using the spare metal that I have accumulated over time. Generally it didn't work very well, the mould was poor  and the metal doesn't like to be cast more than once. It becomes very very hard once set and very difficult to file and model, you need to add bismuth as a flow improver.
These figures had the body and legs covered with a thick Miliput cloak and arms and heads from the Perry Dervish set. 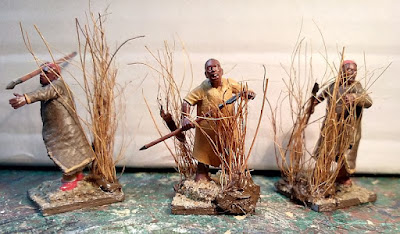 All that said I like the final effect. The grass is from a hanging basket liner glued on this a glue gun (hot melt glue is my personal nemesis) and the effect looks pretty good.
Not a big fan of this band but this song  reflects my day