"When Alexander of Macedonia was 33, he cried salt tears because there were no more worlds to conquer … [Eric] Bristow's only 27."

However Alexander never thought about conquering Scotland. Today I fought a battle of Macedonians vs Picts using WAB rules. Okay so they would never have met geographically or temporally but who cares, aren't these what ifs one of the greatest things in our hobby.
The Greeks were 2 phalanxes, I unit of hoplites, 3 units of skirmishers, a unit of light cav and a unit of Companions. Against these the Picts were 1 unit of noble warriors, 3 units of warriors, 2 units of skirmishers, 1 unit of light cav, 1 unit of noble cavalry and some berserkers. 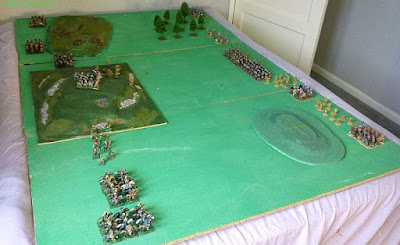 The Picts started on the left with cavalry on one wing and warriors on the other. The centre was held by the nobles and skirmishers.
The Greeks had the Phalanxes in the centre, hoplites on the right and cavalry and skirmishers on the left.
The battle started with the Greeks advancing on the flanks and countered by the Picts 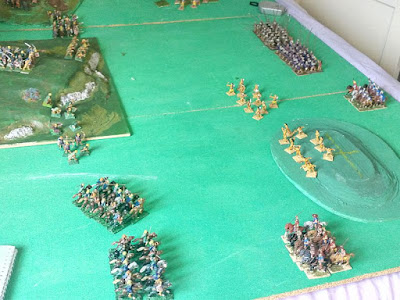 The Pict LC chased of the Greek slingers and the noble cavalry and the Greek LC clashed. 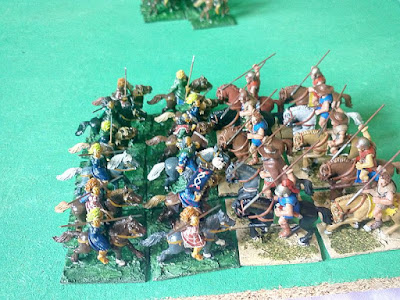 The Pict general was decisive and the Greeks were routed, pursued and destroyed 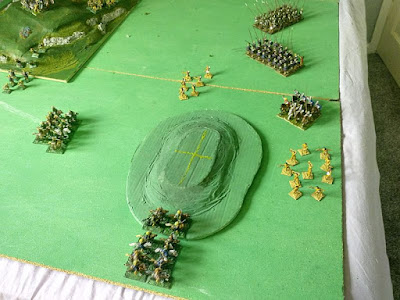 The caused the Phalanxes to wheel to protect their flanks from the Pict cavalry.

On the other flank the Picts and the hoplites charged into eachother with the Picts releasing a single berserker during the charge. 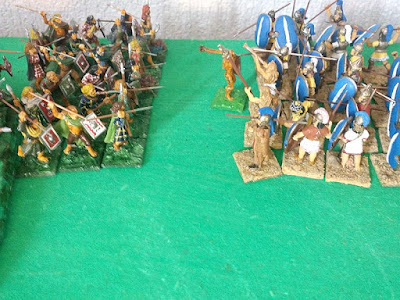 The berserker kills 2 hoplites and the units clash. It is a close run thing but the berserker was decisive and the hoplites rout (just).
The next turn saw the Picts destroy the slingers and then are engaged by the Companions in a wedge formation. The 2 generals met head to head and fought to a draw. All around them however the Picts were killing the greeks and after 2 rounds of combat the greeks routed leaving the 2 phalanxes effectively alone to be shot to death.
Overall it was a crushing victory for the Picts who were lucky with the dice but the Greeks were too dispersed and got surrounded before the phalanxes could engage.
No song is appropriate on the terrible weekend,