So much to say, so hard to make it interesting

This is my 50th post and as I write I've had 4636 hits, approximately. I done some stuff and generally flitted about since April when I started but it's been fun.
It's Secret Santa time over at The Blog with No Name and I've joined in the fun.

I've been asked to provide a list of periods and genre's I'm interested in. Well as you an see from the blog it's pretty much everything in 28mm except medieval (just don't have any figs), Napoleonic (too hard to paint and you need too many figs) WW2 and sci fi. Otherwise pretty much everything else takes my fancy.

Finally I got round to fighting a major VBCW battle (excuse the lighting the lights in my spare room are rubbish), Dinnington miners vs Northumberland Rangers. The miners have control of a large warehouse in Seaton Burn and are using it to store a cache of supplies. The Northumberland Rangers have been sent by the Duke to capture the supplies. 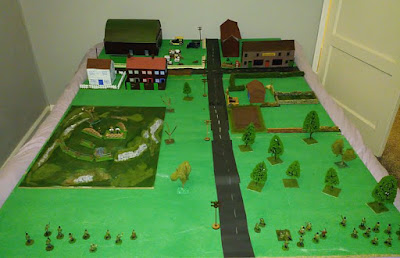 The Rangers enter from the bottom and are faced with a built up area around the warehouse at the top, Maggot's farm to the right and Lime hill to the left. Lots of places for ambush and lots of cover for the enemy 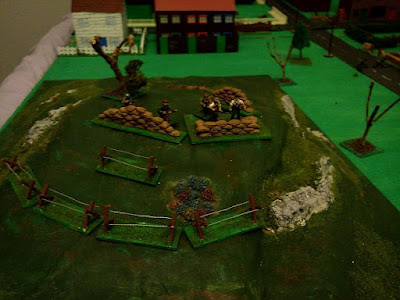 Lime hill is manned by 1/2 squad of miners with a Bren and the Rangers enter within range of their guns.
1st turn and miners get the initiative but the squad fails its command rol so as they sit and watch the Rangers squad deploys and opens fire killing 2 men and routing the miners off the hill. 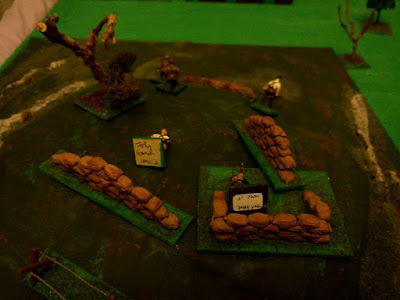 On the otherside of the map the other 2 squads of Rangers including a HQ squad with a Vickers and a knee mortar, advance to towards the wall.
The miners panic and deploy all their figures, OK I panicked. This puts 1/2 squad in farm and other squads in the Bay Horse pub, Meeker terrace and the warehouse. 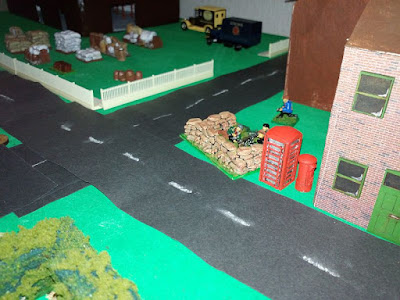 The rangers advance to the wall undercover and open fire on the miners in the farm, Their 1st volley kills 1 miner and the miners return fire killing a Ranger. 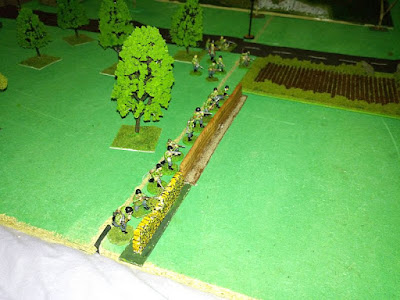 The 2nd volley annihilates the miners. 3 turns and all outlying defenders are removed for the loss of 1 man. This could be a doddle. 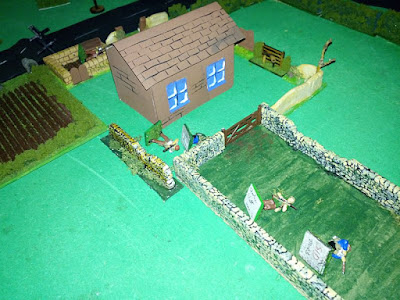 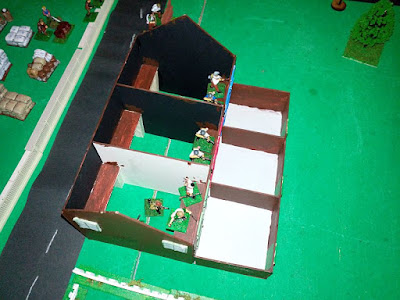 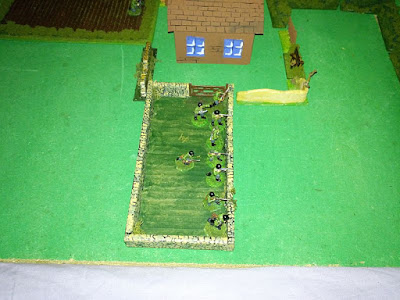 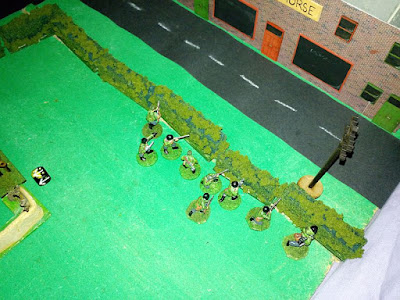 from where they killed the remaining miners in the pub - there are worse places to die (they could have been defending a tea shop... no wait they have cake.)
Meanwhile the HQ squad HMG opened fire on the troops defending the fence line and killed a couple but the miners HMG fired and took out the Ranger's HMG. The knee mortar and the miners homemade trench mortar used up all their rounds in an ineffective duel.
The coup de gras was squad 2 lapping round the Bay Horse and occupying the houses opposite the warehouse. 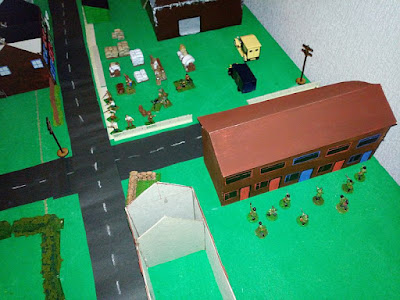 This left the miners effectively surrounded and even more out numbered than the start of the battle. I decided to call it off then - no point in last man standing, although I may resume tomorrow and fight the battle of the warehouse.
Generally it was a kicking with the miners losing 16 men to the Rangers 4. Weight of fire was important for the Rangers but the miners were too passive and I panicked so they were picked off piecemeal.
The 2nd squad of rangers were heroic and medals will be awarded so they deserve this song